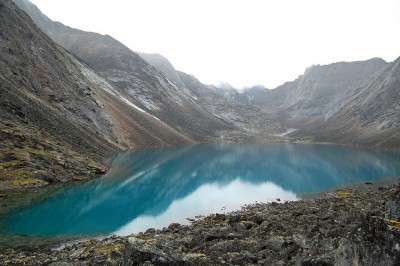 “For the next two weeks you must survive using the knowledge, skills and gear you bring with you. You will walk or float through intact ecosystems where people have lived with the land for thousands of years. You will experience solitude, self reliance and nature on its own terms. Are you prepared?”

That is the quote found on the documentary’s vimeo page that sums up the 17-minute long movie. Two brothers, Eric Dennis and Justin Dennis, made the trek to the Gates of the Arctic Wilderness National Park and Preserve in northern Alaska in late August 2010. For 13 days, the two men wandered, rafted and slept in one of the wildest national parks in the United States. There are no established roads there, no trails, visitor facilities or campgrounds, just undisturbed wilderness, aurora-lit nights, and wild rivers that meander through glacier-carved valleys.

They followed the Alatna River, viewed the Arrigetch Peaks and documented it all thanks to solar power that recharged their equipment. They took a Canon EOS 5D Mark II camera, a Fiesol tripod and three lenses: EF 28 mm F1.8, EF 70-200mm F2.8 and EF 400mm F5.6.

Catch more of Orange Soda Productions work on Eric Dennis’s vimeo page. Music heard in this documentary was: “Intro” The XX, “My Girls” Animal Collective, “Sweet Disposition” The Temper Trap, “The Road to Nothingness” Solar Fields, and “Boy With a Coin” Iron & Wine.