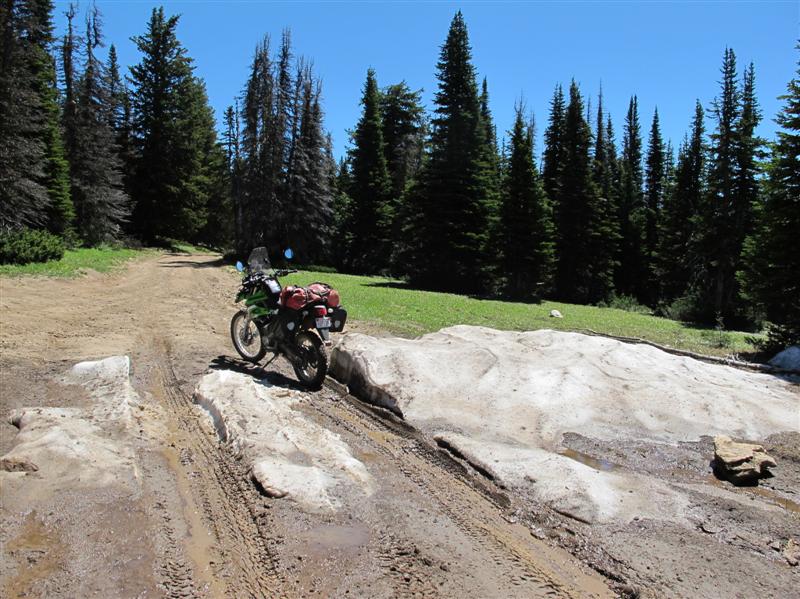 There was nothing but dirt, rutted roads all around me. Impassable roads in wet weather and snow with the likelihood of encounters with wild animals like bear, cougars, gray wolves and wild horses. These are the words that sparked an interest in my latest two-wheeled adventure. To say the road was difficult to access was an understatement. Normally, these types of roads required a vehicle with four-wheel drive and low gearing, but the KLX-250S was up for the challenge.

The Pryor Mountain Wild Horse Range offered a light taste of adventure. To run with wild horses, a herd that did not exist elsewhere on the globe was a motorcycle adventurist dream. I packed my KLX motorcycle for what I thought would be similar to a previous experience I had in Pamplona, Spain: running with the bulls. This time my adventure found me running, but for a wilder reason, to end not wounded by a bull but winded by a horse.

At one time there had been two to five million feral horses in the United States, but from 1900 forward the herds had been significantly reduced by a combination of federal programs and competition from domestic cattle and sheep. The free-roaming herd I sought had at one time been proposed by the government to be 30-35 animals confined to 39,650 acres of protected reserve along the Montana-Wyoming border known as the Pryor Mountains Wild Horse Range. They were widely believed to be the few remaining descendants from the Spanish Barb horses brought to North America by Juan de Onate’s expedition in the early 1600s. The United States Supreme Court, Presidents from John F. Kennedy to George W. Bush, and the nation of the Crow Tribe of Indians had all been involved at various times with the survival or demise of the few remaining horses.

My first sighting was two horses grazing alongside the paved Highway 37 in the Bighorn Canyon National Recreational Area. The scenic and well maintained road provided little challenge for my KLX and both horses were as docile as the road. As I took pictures from several hundred yards away I thought, “Not much of an adventure was happening, just a couple of horses munching grass on a quiet July afternoon.”

A park ranger stopped and asked if I needed help, seeing me with my helmet off standing by the parked motorcycle on the side of the road. I thanked him for his offer of assistance, and then asked, “Is this all there is with these mustangs?  Not much adventure here.”

He laughed, and suggested if I wanted adventure I could find it in the mountains that loomed above us. “You’ll test yourself and that loaded motorcycle getting there, but once you reach the top you ought to find the main herd of nearly 150 there.”

Two hours and 30 miles of gravel tracks later, I found the first free-roaming horses at a sign directing me towards Penn’s Cabin. I parked the motorcycle, grabbed my camera and digitally recorded the two mustangs.  Meanwhile, they wandered towards my motorcycle. A dim light went on in my brain and I wondered, “Hey, what’s going on here?” Before I determined what they were seeking they had reached the motorcycle and started to nuzzle the luggage and then the tank bag.  Zipped closed, the tank bag held some snacks, trail mix and a dinner of canned beef stew with a plastic wrapped green salad. Not deterred by the closed tank bag, one horse clamped its teeth on it and pulled. To my surprise and that of the two horses, the tank bag remained affixed to the motorcycle as it toppled over.

The two horses were skittered enough to run off several yards. I raced back to the downed motorcycle and wrestled it upright. While trying to bend a bent brake lever straight the two horses wandered back towards me and the food inside the tank bag. Rather than deal with two large wild horses with and their desire for the contents, I started the motorcycle, shifted into first gear and started to drive, only to be followed at a good clip until I shifted into second gear and pulled away.

Less than a mile further my hunt for the larger herd was rewarded when I saw 40-50 horses spread around a large flowered and grassy alpine hillside. I watched them for several minutes, and then saw a foal lying down in the field.  After turning the motorcycle off, putting the side stand down and climbing off with camera at the ready, I slowly walked towards the young foal, clicking photos, remembering to stay well away from the horse.

As if the foal had somehow received a message from the earlier two horses, it stood up and started to mosey towards the parked motorcycle. Sensing I was going to experience an upset motorcycle again, I started to run towards it. The foal did the same. It was a race, my two booted old feet against the fleet four of the horse.

The race did not last long. The elevation of the alpine slope up to my motorcycle was nearly 8,700 feet. My stamina was nowhere near that of the young mustang. I flagged out after 20-30 yards, flopped down on the ground and was gulping for air like a guppy out of water. The horse easily scampered up to the road where it stopped next to the motorcycle and sniffed the bags.

The ride back down the mountain was a driving test the park ranger had not mentioned. An afternoon shower forced me to drive at a creeping pace, often dabbing through the water slickened ruts.  Either way, up the mountain or down, both called upon my tenacity to keep my heavily laden KLX250 upright and prove to the ranger, and myself, that we could pass his suggested skill test.

That night as I was camped in the Pryor Mountains I reflected on my day.  I had seen nearly half of the herd of 130-150 wild horses and digitally captured many with my camera. The low point had been watching my tank bag being ripped apart. The highpoint had been running next to the young mustang. As I reflected on the day over my salad-less dinner I had to smile. It had indeed been an adventure, running with the mustang.