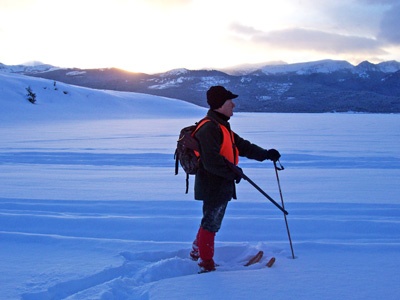 Snowshoes, which historians believe originated with nomadic hunters more than 6,000 years ago, remain one of the best ways to get around in the winter woods, especially if you like doing it quietly and observantly. As a sportsman, hiker and lover of nature, I’ve used snowshoes to enter the quiet and enchanted snow covered world for more than 40 years. I’ve used them to hunt snowshoe rabbits, run a trap line, access lakes to ice-fish, and hunt bison with a friend who drew a special late season tag.

In addition to being quiet, kind of romantic and just plain cool, snowshoes are probably the healthiest means of accessing the winter woods because they provide a great workout. Reach a distant pond, an incredible vista of the frozen landscape or a rabbit inhabited swamp on snowshoes, and you’ll feel a certain degree of accomplishment no snowmobiler will ever experience. Plus, you’ll have burned enough calories to eat a big meal and desserts to boot.

When I began snowshoeing in the 1960s, snowshoes were made of wood and rawhide and came in three basic shapes: Alaskan or Pickerel, Maine or Michigan and Bear Paws. There were local variations of the names, but the Alaskan model was a long narrow shoe with a turned up front, made for traveling long distances through relatively open country. Maine shoes were wider, less turned-up and had a tail that helped you navigate through more wooded and brushy areas. Bear Paws, appropriately named, were even rounder without a tail.

In the early 1970s, the first aluminum snowshoes hit the market. They were far lighter with polypropylene and Hypalon replacing rawhide webbing and vastly improved bindings. Snowshoeing entered a new era, and by 2000, more than five million people were snowshoeing for sport, exercise and enjoyment. There are now models for kids and people of all sizes. With lightweight ski poles to enhance balance and mobility, even a novice can get in the woods when snow hits.

There’s little doubt the new style snowshoes with their lightweight and snow-shedding materials have an advantage over the heavier wood and rawhide shoes of yesteryear. But for some, taking to the woods with old style wooden webs and a muzzleloader or single shot rifle represents a return to an earlier time, and it’s a whole lot of fun. That’s exactly what my friend Tom and I did a few winters ago when he drew a coveted bison tag in our home state of Montana. We decided to leave the trappings of modernity behind and dress in traditional wool clothes and use old fashion wooden and rawhide webs. Tom and I found two sets of Alaskan snowshoes made for the famed 10th Mountain Division during WWII and, along with a replica 1885 High Wall 45.70, began our pursuit of  a bull over four to six feet of snow in sub-zero weather. It took us four days of hard hunting over miles of wild country to catch up with a small herd.

In a scene out of the 18th century with the wind blowing and snow swirling, Tom set up on a pair of shooting sticks and shot the bull through the heart at 30 yards. It was wild, wonderful and among the most memorable hunts Tom or I have ever experienced.

So whether you are a hunter, fisherman, trapper or just love getting outdoors in the winter, be sure to give snowshoes a whirl. It’s a great activity both alone or with friends and family. You should start off easy by going just a mile. Increase your distances as you become more adept at using them and gain stamina. Then head to a remote lake for a day of ice-fishing. Pack an axe and some lunch, build an outdoor fire and escape to an earlier, simpler and quieter world all while having the satisfaction of doing it under your own power. Take a couple of kids along, and you just might set in motion a priceless tradition for years to come.

This story first appeared on http://www.unionsportsmen.org.