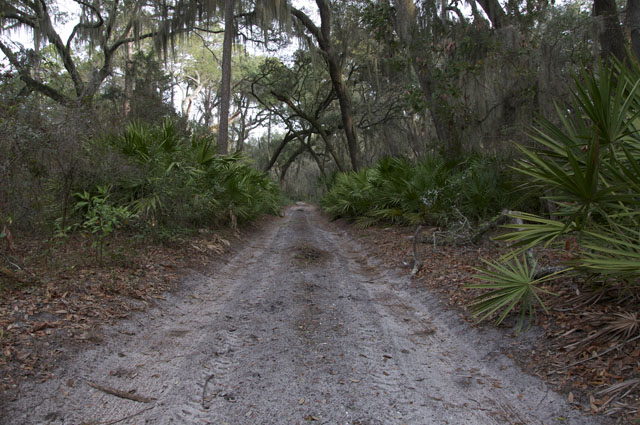 It was 5:00 Thursday morning when the last siren that I cared to hear blared past my window. Sleep had left me long ago as I rolled out of bed and made plans to get out of Savannah. I had read about Cumberland Island, two hours south of Savannah, and decided to give it a try.

Sunrise found me on I-95 South in pursuit of some peace and solitude. No cell phone, no computer, no communication. I was on my way for a lonely two and a half days and I couldn’t wait. After the two hour drive, the one hour ferry ride to the island and the hike as far north on the island as I could camp, I was finally alone.

I camped the first night at Brickhill Bluff. The sun was setting over the Brickhill River about the time I entered the campsite. The soft, warm light reflected off of the water and through the Spanish moss, giving the area a magical glow, if only for a few minutes.

By sundown the wind picked up but the clouds stayed away. From my one-man tent beneath a Georgia Live Oak, I could see the starlit sky and felt rested. Even after a 13-mile hike, the peace within me drew my eyelids closed as the sun raced to meet me on the morrow.

Sunrise again. Coffee boiling on my Jetboil stove. I read through the opening pages of Boone: A Biography by Robert Morgan as I lay back against a moss-laden stump. Four wild horses strode through the camp, munching on Spanish moss, not a care in the world. My goal was to match their disposition.

By 9:00, I was hiking north yet again, en route to the “The Settlement,” where the First African Baptist Church still stands. My travel was delayed when a rattlesnake forced me into a Mexican standoff. He finally gave after several tense minutes and I hurried on up the trail. After leaving “The Settlement,” not yet having seen another person, I headed west, then south where I picked up the Roller Coaster Trail. The first mile or two was through the rolling sand dunes that make up most of the outskirts of the island.

By 2:00, after a solid 10 miles, I made it to the second campsite of my two-night stay. Yankee Paradise was very primitive and offered solitude though there was not a good water source nearby. I had to walk a mile east to Plum Orchard Mansion where I found a spigot on the side of a tool shed. Not having to wear a heavy backpack made the two-mile round trip seem short.

Back at camp I read in the dirt and could not have asked for anything more. Near sunset, a Boy Scout troop with approximately 10 kids and three adults hustled into camp and began setting up tents. They were very orderly, going about their business in hushed whispers. There was plenty of room for all and we got along just fine.

The third morning was the day of departure. I had to catch the 10:15 a.m. ferry off the island. Sea Camp, where the ferry arrives and departs, was approximately seven miles from Yankee Paradise.

I broke camp well before sunrise. The day was cool after an all night blow that brought some rain. Turkeys yelped and gobbled all around me and periodically they crossed my line of sight in the dense Palmettos. Several more horses walked idly by as I excused them and they me, and we went on our separate ways. Even though the island is meant for people like you and me, who periodically need to reacquire pieces of our souls after long bouts with man and machine, it is still the natural birthplace of all the animals living there. If they are willing to share, we should gladly give them their space as well as the respect they deserve.

I made it back to Sea Camp an hour early; just enough time for a cup of coffee and some reading before the arriving boat meant the end of the trip. As I sit at my computer once again, fresh from a shower, I still yearn to throw the heavy pack on and keep walking. But when it is real life that is calling, we must trudge on until the light shines on the next trail.