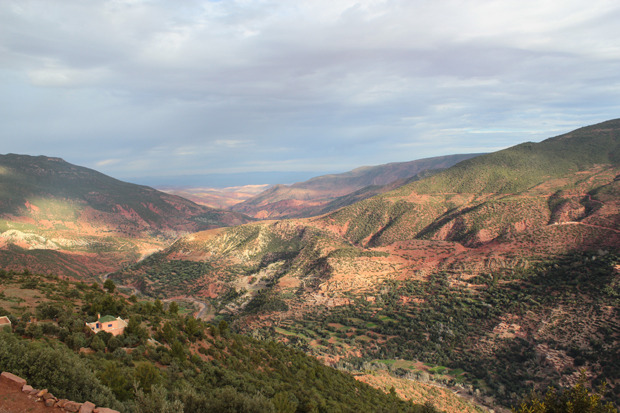 We made the mistake of a taking one of those “touristy tours” to camp overnight in the Sahara desert. In reality though, there is no other infrastructure available if you want to do a DIY desert tour. There is no bus connection, no train and definitely no plane. So if we wanted to see the Sahara, our only option was a tour group. When I visited Morocco with my boyfriend in January 2012, Marrakech was the place to be because the city is the gateway to the desert. It’s close to the start of the Sahara. And just like everything else in Morocco is supposedly close – only 10 minutes walk away; close to the Sahara means 7 to 10 hours by bus.

So it didn’t take much sweet-talking during the initial meeting with our tour company before we were fired up about our seemingly “magical” tour. We’d take a bus, albeit early in the morning, with a group of people from all over the world – already I’m thinking of all the awesome new friends I would make and the bonding that takes place in the outdoors, especially while on an awesome and unusual journey into a landscape not available near to any of our hometowns, the notorious Sahara Desert.

The trip would last two full days and one night. The drive there would traverse through the High Atlas Mountains, Morocco’s tallest mountain range. We’d stop for photos and lunch along the way. Scenic spots included the Drâa Valley, named after the Drâa River, a lookout onto Morocco’s longest river at 683.5 miles and plentiful Kasbahs and Berber villages. A Kasbah is a “village castle,” where the leader of the village typically lived. You’ve heard the The Clash song, “Rock the Kasbah.”And the Berbers are the native people of Morocco, just like the Native Americans in the United States. Nowadays, the Berbers live mostly in Morocco’s four mountain ranges and other isolated parts of the country far away from the big cities. We’d also be stopping at Ouarzazate (pronounced wahr-zah-zaht), most notably the location of CLA Studios where movies like Lawrence of Arabia, Black Hawk Down, Gladiator, The Mummy, Troy and Babel were filmed. If you haven’t gotten a sense of the scenery yet, it’s a small desert city at the foot of two mountains, mostly inhabited by Berbers where the buildings are made of cob and cats roam the streets while the bored villagers among the restaurants and shops annoyingly solicit your business.

Then we’d spend the night in the desert nearest Zagora (pronounced zah-gooh-rah) where we would stop by the side of the road and ride camels one and a half hours to our campsite in the desert, eat a large “tagine-style” meal prepared by Berbers, then watch the sun go down, build a campfire and then watch the sun rise again in the morning against the hills shielding the desert in the distance.

Well in reality, we were bused around by a driver who had done this route too many times. He would stop at many scenic spots then shout at us, “Five minutes! Photo!” in his Arab- and French-accented English assuming we wanted to take a photo here. The sights driving through the High Atlas mountains were, in fact, scenic, but every roadside cove we stopped at came with its seller and the goods were expensive! When your only clientele in a developing country are tourists, the price mirrors developed-country prices. Lunch was where our driver got a commission from the restaurant, hardly anyone in the group spoke English, the camels were extremely uncomfortable and our driver napped too long during lunch so we viewed the sunset from the bus.

And with all that, I still had the time of my life thanks to the enchanting scenery and the company of my boyfriend and the two Italians from Rome that cracked us up with the stories they so struggled to relate through fearfully basic, single-word English and gestures.

From Marrakech city you can see the snow-capped mountains of the High Atlas from certain open areas of the city, but best from one of so many restaurant or hotel terrace rooftops. After a few hours of driving, the peaks weren’t so far away anymore. I felt like I could step out of the bus, start leisurely walking up and it wouldn’t be long before I would summit. I was amazed by how drastically the landscape changes in seven hours of driving. When we finally reached some height in the north High Atlas (we were heading south toward the desert) the land dropped steeply down to the valley below. Sparse but green vegetation was visible on the red clay soil and the solid red rocks reminded me of Arizona.

Hours later we were heading down past the peaks in the direction of another valley and toward the Anti-Atlas Mountains, the range south of the High Atlas that is the last mountain border beyond which the Sahara begins its 3,600,000 square-mile stretch. Heading down the High Atlas, the land became much more dry and desolate. I wondered about what would we do if we ran out of gas. Thirty minutes would pass before we saw a village on our drive. Down in the valley it was hot between noon and two PM, even in mid-January. I was overdressed in long pants and a long-sleeve button up.

We reached Ouarzazote only to briefly stop for one hour in a town that deserved at least three. My boyfriend and I left the group luncheon to quickly traverse the small part of the city we could see by foot in hopes of finding the 9th-century Kasbah, but the streets of the medina (the original old quarter of the city, usually walled off from the new part) is just one incredible maze of varying street sizes, alleys appearing out of nowhere and infamous unmarked streets. Without a map there’s no chance we could have found the medina, even with a map it would have been questionable. And you can’t trust Moroccans to give you directions, you’re better off getting lost yourself without the help of sly city-dwellers. We waited an extra half hour for our bus driver to wake up and decide to get back on the road. Come to think of it, he probably did that so we’d all congregate by the bus at the agreed-upon time only so that we would look around through the shops by the bus while he stalled the journey. I wouldn’t be surprised at all if that was the case. Moroccans hustle hard.

The further we drove from Ouarzazate, the more charred the land became. There was hardly any vegetation besides a few dried shrubs and surprisingly, patches of palms teeming with life. We wondered if they were planted. Our assumption is that they must have been because each thick patch we saw was fenced off and grew in a perfect rectangle.

Toward the end of the bus ride, around 5 p.m., I had been in a bus too long (almost 10 hours!). I laughed to myself that the 13 people on this bus, myself included, paid 600 dirham (70 U.S. Dollars) to see some sand. But that sand, the stars above it, the supreme isolation out on it and the near-complete lifelessness was exactly what I was looking for from the Sahara.

Words can only describe so much. That’s when video comes in. Below I’ve put together a few quick snaps of the ride set against classic Berber music so that you can get a feel for our experience on the ride.

Read Part 2 of the overnight stay in the tents, camels and Berber music; click here.

Photos and video by author