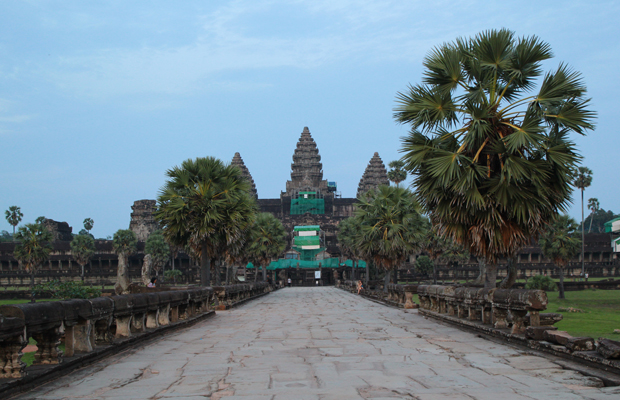 Past the crowd of peddlers I came upon the second guardians the to main entrance of Angkor Wat. Two large nagas (seven-headed serpents) stood at the end of the bridge. Now it’s official, this is unmistakably the entrance. The bridge across the moat extends overland and leads you directly into the main hall of the temple. On the grass inside the complex that surrounds the actual temple there are a few relatively small, pillared structures, which reminded me of the Parthenon. Along one bank there is a whole bazaar of more expensive sellers (because this is the main hub for tourists; more tourists equals more money).

I walked past to entrance the “Terrace of Honor” and finally felt Angkor Wat’s booming presence. It was immense. The stones laid down to build this place were massive and innumerable! The temples have really only been getting worldwide tourist attention since the 1990s, but I could see this exploding as a tourist hotspot considering this structure is on par with the ancient Egyptian pyramids and the hidden Peruvian city, Machu Picchu. Angkor Wat carries the same mystique with regard to its construction: How did ancient civilizations move and arrange such massive blocks of stone in such intricate patterns? Then the carvings, the bas-reliefs and sculptures as towers… incredible. Angkor gets about two million visitors annually, still a small number considering the Eiffel Tower gets almost three times as much per year.

This temple (or mausoleum) was likely built in the 12th century. Its five towers represent the five different peaks of Mount Meru that sits at the center of the universe, according to Hindu belief. Even the surrounding moat is a symbol of the cosmic ocean. Inside I walked past impressive stone windows and hallways. Within the temple stood a few large statues of Buddha adorned with a shining, bright orange cloth. On almost every wall there were bas-reliefs of apsara and along the inner walls were bas-reliefs of a narrative story of kings and battles, gods and demons, heaven and hell and great Hindu myths. Slowly I climbed higher within the structure to walk along each corridor that spanned for meters in front of me. I passed a pit of stone that struck me as a fighting pit at first glance. It looked Roman: Very deep, frightening and with room for spectators. It’s possible that what I was looking at was one of four sacred ponds within the enclosing walls when the temple was in use.

I walked through every corridor that opened up in front of me, admiring the details of the thousands of bas-reliefs on the walls. In the back of the temple, two large entry ways open up into the grass that is behind the building. Two treacherous staircases led down to the ground meters below. A monk sat at the top of the edge of the stone steps reading a text. When I wandered over near him just to peer down the staircase to decide if that’s where I’ll make my next move he started conversation with me. Just a short, quick exchange of where I’m from and whether I can attempt to go down the stairs. He gasps, “ooooohh no. Danger.” Not to worry, because the view on the huge scattered rocks on the lawn is charming enough from the staircase. I take so long to explore and to find a place to sit and wonder that I don’t immediately notice the sun is beginning to set. Most tourists had left at this point to go to the neighboring temple across the moat, Wat Bakheng, that sits atop a hill rising above the treeline where the view of the sunset is ideal. I decided to stay in the relative peace and solitude and view the sun going down over the walls that guard and enclose Angkor Wat. As I walked around trying to find a high westward-facing vantage point, I noticed that there were stairs leading up the middle and tallest tower in the complex to a patio with westward-facing windows at the top. Unfortunately, I then noticed the sign and barrier at the bottom of the stairs that say “No Access.”

I take a look around to see if anyone would even notice if I just darted up these stairs to get a personal prime view of the sunset. Yes, definitely; there is a guard. He sees me eyeing the stairs and to my surprise he comes up to me and offers to lead me up there for a bribe. The Cambodian man dressed neatly in blue garb says, “For $15, I’ll take you up there.” How sneaky. It’s not that I didn’t want to go, far from it. I just literally didn’t have $15 on me. I tried to talk him down to the $5 in my pocket, but he was looking for that the full deal. I thanked him and declined. Moments after we parted I glanced behind me and saw the guard posing the same offer to another couple. I don’t wish him the ill fate of approaching the wrong person with this proposal because I’m sure his job is much better than all the peddlers on the street.

So instead, I head back toward the front of the temple and find a high, secluded spot. It took me a few tries. People hang off of every westward corner like monkeys at this time. Luckily the staff is clued in enough to let people stay there till after the sunset. Then you must exit quickly. With not one electrical cable for artificial light in sight, once the sun is down, the temples are closed for the day. Having biked around for the past two days to all the major temples and having covered so many kilometers that I lost track, I decided to take a chill day on my third day of visiting the temples. But, chill or not, I was determined to see the sun come up on the same hill that most people come to watch the sunset. There is a clear view over Angkor Wat and Siem Reap in all directions from Wat Bakheng, just a kilometer or so north of Angkor Wat.

Wat Bakheng is a unique temple constructed on top of a small mountain. The base of the temple is actually carved into the mountain itself. But, as one of the oldest temples in the complex, built in the 9th century, it is crumbling more alarmingly than any other temple. Much of the access to the temple was restricted and there was restoration work being done on an entire wall of the temple.

I misjudged how long it would take me to bike to Wat Bakheng from my host’s house in Siem Reap. I was peddling as fast as I could when I saw the sky begin to blue. Once I parked my bike at the base of the mountain, I ran and climbed faster than I ever had before. Once I reached the top, I sprinted past construction to the top of the tower on the mountain. Properly winded and a little mad at myself, I sat down to face east, but the sky was a light blue color already. The day was overcast and looking like it was about to rain anyway, so all my rushing was unnecessary, nobody who made it up the mountain on time saw any glimmer of the sun. I was one of 14 people on top of the mountain at 5:30 in the morning. The only indication that we had that the sun was up was the gradual lightness that brought the temple out of its gray color around us. The temple was pretty barren at the top of the tower on top of the mountain, a flat stone terrain with numerous shrines standing proudly on the surface. Sure enough, the sky grayed further and soon I heard thunder. Hanging around for just a few more minutes to explore the base of the temple and the hillside it sat on, I decided to get going as soon as it started drizzling.

On my way down the path that leads to the temple, it started raining. Perhaps that’s why I didn’t see any elephants carrying people up the hill at that time. At the temple complex at Angkor Wat it’s possible to arrange an elephant ride to Wat Bakheng or travel to a vantage point from a hot-air balloon that’s anchored near the main temple for $11 a head. Next time.

Now I was concentrated on getting back home as fast as possible as the weather quickly became worse. By the time I had set back out for home on my bike, it was raining buckets of water. I was essentially riding through a falling lake. Twenty five minutes later back at home, I was so drenched that I couldn’t go inside without squeezing out my clothing. By 7 am that day I had my fill of Angkor Wat for a few years to come. Three days of diligently biking it for kilometers, not really knowing where I was going to end up next and with a guidebook and a map as my main sources of information, I just wanted to chill out at a cafe and get another Dr. Fish treatment.

Next time I visit Angkor Wat I anticipate that there will be more than the two million annual visitors. With more tourists, I’ll want to get away to explore all the smaller outlying temples that are part of the 300 square kilometer area. Though I haven’t decided if I’d rather do it with a guide and a tuk-tuk, or on my own time by bike again…

Click here to go back to part three of my Cambodian journey. Click here to start from the beginning at part one.