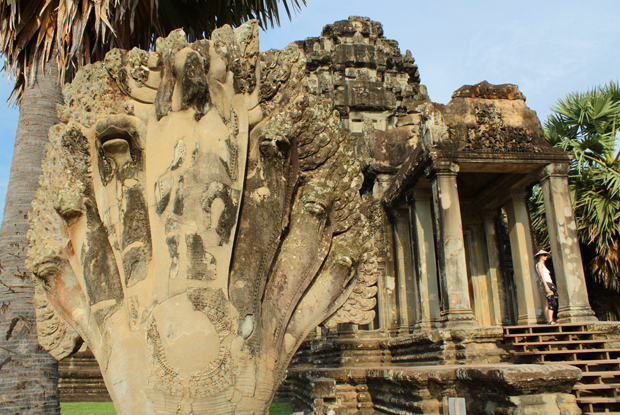 I had really had my fill of all things Angkor the previous day and I hadn’t seen much of Siem Reap, the city tourists stay in when visiting the ancient temples, so I took an afternoon in the small town. Biking around the narrow market streets, I stopped to get a “foot massage” by fish that eat the dead skin off your feet. You sit at the side of a tank and put your feet in, then 100 little fish swarm around them eating the skin off your legs where ever they can get their heads in. I asked the guy operating the “massage” what kind of fish they were. He said, “Doctor Fish.”

Down the street past a street named “Pub Street,” known for its nightlife, there was a giant, roofed market selling all Cambodian goods – spices like amok, kramas (a traditional, multi-purpose scarf), and exquisite (but cheap) jewelry. Along one street that surrounded the market were a line of restaurants and eateries that were very French style. Small, circular cafe tables with plastic lawn chairs – the plastic chairs were the Cambodian touch. At least they weren’t kindergartner size, like the table sets lined up on Vietnamese streets in Ho Chi Minh City. I made the mistake of sitting at the edge of the cafe so that I could get a glimpse of the sun under the terrace with the breeze in my face. Within moments I had child peddlers bugging me to buy their goods. A girl came by with 10 postcards and fortunately for her, I needed some anyway and she had a few gems. So I bought them and of course there were only nine and one was a cut out from a magazine. Even still, $1 for eight postcards wasn’t bad.

Not even 10 minutes later a boy with more postcards is badgering me to buy his. “No, thank you, I already bought some.” “Well, buy more! Have 20 postcards.” “What am I going to do with 20 postcards?” His eyes bug open and he shrugs his shoulders and grunts “I don’t know.” So I say no thank you. “Well, then can you buy me food?” I am floored. I think how unfair it would be for me to say no when this boy might be genuinely hungry and I am the one about to receive my food, fully understanding the concept of “hunger.” At $1 to $2 a dish, I definitely have the money to feed both of us at no hardship to myself. So after a very brief moral debate, I muster, “uhhh, sure.”

He has scored, so he breaks out a smile and sits down next to me. He unabashedly asks me where I’m from. “United States,” I say. And instantly we begin the quintessential game between Cambodian children and foreign tourists. They ask you where you’re from, you reply and they impress you with the knowledge of your own country’s capital, where they have never stepped foot, nor is it likely they ever will. I remembered a funny story of a Polish man who thought he could outsmart the Cambodian girl when he told her he was from Poland. She replies, “capital of Poland, Warsaw.” So he quizzes her on another country and she gets it right. So it’s her turn to ask the man, “What’s the capital of Cambodia?” (Mind you, this exchange took place in Cambodia). The man stumbles and scratches his head. “Ummm… Uhhh….?”

So this little boy and I get to talking about countries and his life. If I am to have a lunch mate, I might as well make conversation and find out a little bit more about the culture here first hand. His English is pretty good and our conversation flows smoothly. I ask him where he lives, about his family. He’s 11 years old and has two brothers. I ask if he’s ever traveled outside of Cambodia. Yes, he’s been to Indonesia to visit his friend and neighbor that moved there a few years ago. I speculate that the journey wasn’t cheap. Hmm, I wonder why an 11-year-old is selling postcards on the street on a weekday afternoon in April. I don’t know Cambodian school schedules, but everywhere else in the world, children his age are in school at this time. I shake it off and don’t inquire further, and we enjoy our lunch together, but the thought that he might be one of those exploited children pushed into labor by his parents sticks with me, like the heartbreaking little girl I saw in Phnom Penh (that’s the capital). Still with a pacifier in her mouth and just learning how to walk, she held onto her sister’s hand for balance as she walked sleepily through cafes peddling bracelets at 11 PM. She didn’t even comprehend what she was doing; she just walked behind her sister, only a few years older than her, and held a basket of bracelets around her neck.

That’s the situation of third-world countries, to be years behind in development compared to the west. They lack medical and conventional infrastructure and still rely on child labor to supplement the economy while Europe and the United States long ago purged themselves from that vice. But I could not stop thinking of children. The rest of the day was filled them as well. Six kilometers later I was standing again at the moat surrounding the main temple, Angkor Wat. A left turn would take me to the entrance to Angkor War and right would take me back toward Prasat Kravan, the first temple I visited here yesterday. Today was the day to explore Angkor Wat and I gave myself plenty of time to do so. Left it was. I hadn’t even ridden past the first corner of the moat before I rode by a group of young children playing in the water of the moat. Instantly I thought, this is such a National Geographic moment. I went for my camera, gestured to the children to get their permission to film and went on a shooting spree. Young girls held some of the children too small to walk or swim on their own. Some boys were doing flips off of a sunken log into the water. They were flipping each other, splashing one another with water from a jug and squealing in delight the whole time. Again, just like yesterday at Prasat Kravan, I got the thought that these children are so used to the temples that this UNESCO World Heritage site is just their playground. Years from now they may realize where they are playing, but right now it’s just the swimming hole. Without knowing it, these children are just the continuation of a line of an empire long lost, but still very much alive.

After I had my fill of pictures, I turned the corner that lead to the main entrance to Angkor Wat temple. Locked my bike up across the entrance, then ducked past all the vendors and peddlers who are always on high alert anytime a westerner is within 10 feet of them. I took my time walking along the long bridge that crossed the moat enclosing Angkor Wat.

Check back next week for part four of my journey through Cambodia and Angkor Wat. Click here to go back to part two.