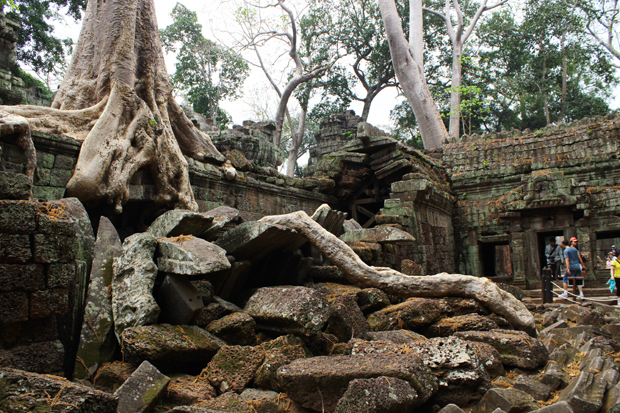 Not much has changed in Ta Prohm since the temple was first glimpsed by the French around 1860. Giant tree roots have grown through the rocks that make up archways, roofs and walls. The image produced is that of a genuine lost world, an Atlantis of the jungle. For hours you can walk around here to explore all that was once labored upon by humans, then so devastatingly and beautifully overtaken by nature over the course of 400 years.

This temple was the first I encountered crowded with tourists. I walked with a herd along a path through the woods to get to the crumbling temple. Along the way, land-mine victims diligently played their specially crafted instruments with whatever limbs they had left to solicit money while the other sellers peddled their handmade goods. What is stunning about the street beggars in southeast Asia is that they all offer something in exchange for your money. Very rarely did I see a beggar sitting silently behind a donation cup. Young girls mostly “sold” bracelets. A boy in Siem Reap offered me his finger paintings in exchange for cash. He didn’t have a leg and claimed to be a landmine victim. Which is believable, children unsuspectingly play in landmine fields here all the time. A native Cambodian I was speaking with at the time said he’s not a landmine victim, but that he was in an auto accident. Either way, I gave the boy money because landmine or car-accident victim, the 14-year-old legitimately didn’t have a leg.

I spent a good deal of time at Ta Prohm walking on the other side of a partially crumbling wall and atop a stone gate outlying the structure, probably not where you’re supposed to be walking, but there were too many people there for staff to notice. There was an incredible structure whose rocks had fallen completely out of place in the 400 years that this temple lay idle. When the French rediscovered it and sent conservation groups there, they were able to rebuild the main walkway. The before and after photos were just beyond belief. As big of an obstruction to the structures the jungle is, it will still never be the way the French found it. They cleared most of the jungle that overtook this and the other temples, but purposely decided the leave much of the jungle how it was at Ta Prohm for aesthetic reasons. Thank goodness the French appreciated the beauty of growth, it’s truly stunning.

I make it back to my bike and ride north from Ta Prohm. Fifteen kilometers later I spot vendor up ahead. Across the street from the vendors stands a mountain of a temple. It slightly resembles a pyramid, with a wide base of rocks that get narrower and narrower as the tower gets taller, but it’s built like a gated fortress, not a triangular pyramid shape. Lonely Planet tells me this structure was left unfinished for unknown reasons, therefore there is an apparent lack of apsaras and other decadent bas-reliefs. I climbed an innumerable amount of stairs to come sit and sweat at the top of this temple, Ta Keo. Most likely this was a shrine or place of prayer given the statue of a Buddha and the offerings and incense before him at the very top of the climb. It’s 2 PM and extremely hot, as always. I came here to wander inside my mind, to find a place to do so. But if it’s not the thousands of tourists who have come here for similar reasons that deter me from peace and serenity, it’s the thousands of bugs burrowed in the thicket of the jungle that make it difficult to find that perfect spot. Still, I sat and enjoyed the breeze in the shade that wafted away the smell of urine from the shady spot I found. If I were to visit this place 150 years ago before Henri Mouhot, I probably never would have known it existed, and now it’s a UNESCO World Heritage site and considered a wonder of the world. I sit and ponder until my growling stomach gives me a headache so I carefully inch back down the steps that are the size of my lower leg and walk across the street for some delicious $1 noodle soup.

I’m tired now from sweating through the heat on my bike all day. My legs ache, I’m out of water and soaking with sweat. Every day here is like the record hottest day of the summer in the states. It doesn’t get cold when it rains here in April, it just becomes refreshingly cool. I’ve started taking daily cold showers just to alleviate the heat.

Since I’m so close, I decide to see one more temple for the day and so I head to Angkor Thom that encloses Bayon, the second-most iconic temple after Angkor Wat. I drove through an archway with nagas protecting each entrance without even knowing that was the enclosing wall to the 10 square kilometer Angkor Thom. A naga is a Hindu and Buddhist deity in the form of a snake, in this case it has seven heads and stands at the gates to protect the city. Angkor Thom was one of the Khmer King Jayavarman VII’s greatest achievements. Under his rule, Angkor Thom was built as his city seat, and was purported to have housed a population of one million people. Angkor Thom literally translates to “great city.” Within Angkor Thom, I came upon Bayon first. It attracted me from a distance; a breathtaking sight of rising towers with former king’s faces on them. Around the base of the towers so many tourists were bustling about that from a distance it looked as if Angkor Thom was still full of its million residents. As I approached closer I was drawn away from the faces of the tower staring back down at me to all the Buddhist monks dressed in bright orange cloth that seemed so relaxed at the entrance. The younger spunkier monks were running around exercising their unending pool of energy, while an older monk, still younger than me, shouted something humorous at him in Khmer (pronounced Kuh-mai), the language of Cambodia.

There were many more monks inside, ranging from just adolescent boys to older, graying robed men. I couldn’t tell if they were here on a pilgrimage or if this was their old stomping ground, either way, they seemed very comfortable here. Displaced stone rocks lay all around Bayon, perhaps to be restored one day. Wooden staircases replaced the stone that had degraded so much to make it dangerous to climb. I thought for a second about the liability this place faces with tourists. I could definitely see many people twisting their ankles here on the crooked stones and slipping on the narrow, tall staircases.

I walked up the shoddy staircases that led toward the base of the towers with faces on them. In absolutely every direction there was a face, usually on all four sides of a tower. There was no way I could count them all, but I read there are nearly 200 faces at Bayon. Researchers are split on whose face they resemble. To me they all seemed like the same face over and over again. They could be the face of King Jayavarman VII who built the city, or that of the bodhisattva Avalokitesvara, the Buddhist enlightened being that is the embodiment of compassion. There were many nooks to explore but after some time the sky grayed and I could hear thunder in the distance. By now I lost count of how many kilometers I biked during my first day at Angkor and I was ready to take a break and go back to Siem Reap. The rain caught me as I was standing directly in the middle of Bayon so I dropped off my things in one of many stone patios and went back out in the rain to cool my sweat-drenched body. When I was sufficiently refreshed I went back in under the enclosure and was perfectly content to read my guidebook while I waited out the worst of the short-lived rain.

On the way out I just briefly passed by Angkor Wat. I stood by the only entrance at the end of a long bridge going across the moat and just admired the palms that grew into a circular ball of leaves reaching high above the stones within Angkor Wat. I couldn’t wait to come back here tomorrow.

A video of Angkor Thom just before the rain:

Click here for part three of my journey through Cambodia and Angkor Wat. Click here to go back to part one.