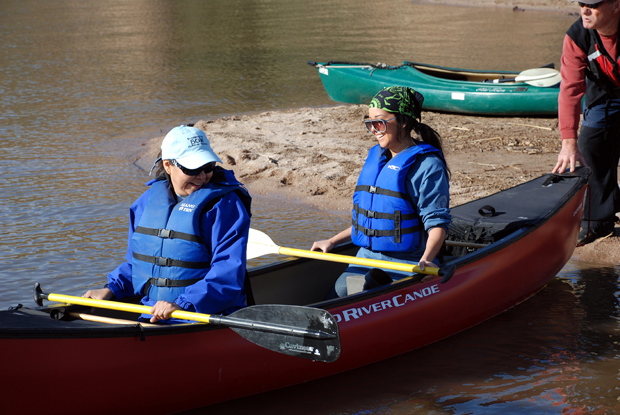 “It’s like going back to girl scouts or campfire girls, but with a much more adult environment. You get to do all those things from camp as a kid, but with pear margaritas,” jokes Becoming an Outdoors Woman workshop attendant Valerie Morrill from Yuma, Arizona.

Morrill has attended five weekend workshop retreats offered by her state’s Becoming an Outdoors Woman (BOW) program since her first experience in 2010. BOW has only been around since 1991, created as a gateway for any woman who wants to experience the outdoors in a safe, comfortable setting. At various BOW classes, and events such as the three-day “deluxe” retreat at Saguaro Lake Ranch in Arizona, women learn outdoors skills varying from making their own tea to shooting guns and bows.

When many people think of hunters, their first thought is not “women”. Morrill pointed out that there’s a deep rift between the genders that participate in the outdoors and that’s part of the reason why the BOW program exists. “The overarching logic of why these programs are available is [because] our society used to be rural, these sorts of life lessons were just very common because people were in a rural setting on a farm,” explains Morrill. “But, as we’ve moved into this much more urban type of population, all of these little life lessons are kind of lost. There’s a real gap between hands-on knowledge of the outdoors. You get it now from Disney Channel and Discovery Channel instead of having that real ability in the outdoors.”

As a retired biologist who worked for the federal government on conservation management, Morrill was often in the outdoors, but never got to be a participant in what the outdoors offered. Through BOW, she’s surprised herself with many of the things she’s learned. “Each time I go I’m learning something new,” Morrill said. “I think I’m such a smarty pants and I go ‘Whoa! I didn’t know that.'” The charm of BOW retreats is that they offer a plethora of classes that one woman couldn’t possibly do in one weekend.

Just like most children’s camps or family camps, BOW weekend workshops offer classes in horseback riding, photography, high ropes, rock climbing, shooting, archery, edible and medicinal plants, and even a class titled Everything You Ever Wanted To Know About Javelina. Morrill was especially intrigued by her archery classes and by the caliber of her instructor who was a professional, tournament-competing archer. “There she is, teaching you, I was so, I don’t know… It really did something to me,” said Morrill. “I got nuts about it. I went a bought a bow and I went and tried archery [bow] hunting. There’s just something about it. It’s a quiet sport.” Morrill is just one of hundreds of women between 18 and 87 whom BOW organizers have seen repeatedly attend the BOW workshop in the 15 years of the workshops in Arizona. Kim Kreuzer, the office manager for the Arizona Wildlife Federation and co-organizer of the workshops in her state said it’s very rare not to see a woman come back for another workshop. “We have such a variety of personalities come,” Kreuzer said. “Sometimes you get the girls afraid to touch worms when out fishing. Then they get really excited and bait their own hook. They go from one personality to another – they become more adventurous…. It’s always the first one that’s hardest.”

The BOW workshops, held a few times a year in most states and in Canada as well, draw all sorts of women for reasons that vary even more than the women’s personalities. Morrill wanted to see the other side of the coin and participate in everything she was working to conserve as a federal biologist. The first time she attended, she came alone. Following her great experience, she encouraged her sister to come out. As a school principal, Morrill’s sister wanted to learn to be comfortable in the outdoors, but never really had the opportunity.

Kreuzer said she’s constantly blown away by the women who show up and for what reason. “We’ll have really shy people and really outgoing ones that come. Women who come maybe because they’ve lost loved ones and come to get their life back on track. Some come so they can meet new friends and get out and do things.”

She recounted a particularly touching story that made a woman come out because of unfortunate circumstances.

“I think it was the first BOW workshop I went to, there was a woman, part of her face was missing. Her eye had been replaced and she had one hand.” Kreuzer said. “You hate to ask, what happened to you? I didn’t say anything. On the car ride to the shooting class, she opened up and told us that one night coming home from shopping she got out of her car and a man had followed her and approached her. She dropped everything and ran as fast as she could, quite a distance, but the guy finally caught up with her and shot her in the face and arm. She got robbed, and now she’s taking shooting classes to get over her fear of handguns. You can just never tell how many different women come and for all the different reasons.” The woman attended more BOW workshops and is now an instructor there who comes to help out in the evenings.

The BOW “Deluxe” retreat coming up in Arizona is a smaller retreat designed for those 35 participating women who may not yet be very comfortable in a primitive outdoor setting. The program is housed in a bed-and-breakfast type of suite with fewer room mates, while the other weekend workshops in Friendly Pines Camp offered by the Arizona Wildlife Federation has 100 women who camp in primitive cabins and are a little bit more comfortable with the outdoors already.

To find out more about the BOW “Deluxe” workshop in Arizona click here, or go to the BOW national website here to find out about workshops in your state.