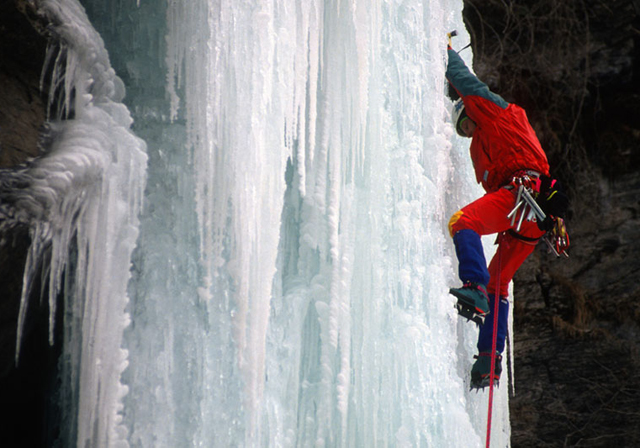 Follow Jeff Lowe as he ascends an impossible climb among ghosts in the documentary Metanoia, created as his legacy of a lifetime of impressive achievements.

Jeff Lowe’s Metanoia is currently in the making as Lowe’s most ambitious project to date, during his legendary life as a mountain-climber. He is currently the world’s only climber who successfully ice-picked his way straight up the route, Metanoia, on the notorious north wall of the Eiger in Switzerland in the year 1991 – 13,000 feet into the air. Solo, in winter and without bolts.

Ueli Steck, one of Europe’s prominent climbers, met with Lowe in an attempt to recreate his route up the Eiger, but has not yet met with success. Steck has long known of Lowe’s legacy and may still plan an attempt. In a meeting between the two at the Bellevue Hotel in Kleine Scheidegg in Switzerland in 2010, Steck said, “Jeff Lowe is the ice climber. He invented ice climbing. For us in Europe, especially, ice climbing comes from the USA. And Jeff is the person who did it.” Lowe has had an amazing impact on the world of climbing as the inventor of mixed-climbing (combining aspects of rock and ice climbing). He founded two mountain gear companies and also brought the World Cup Sport Rock Climbing Championships to the United States and the Ouray Ice Festival Climbing Competitions.

A passion to climb the notorious Eiger took hold of Lowe in adolescence. He had already completed many climbs with his father and brothers and was one of Utah’s youngest successful climbers. When he read The White Spider by Heinrich Harrer at age 13, an fascination with the Eiger’s history developed. In the book, he read of the 64 unfortunate climbers that haunt the mountain. Their stories stayed with him through decades until his own life, at 41 years-old hit rock bottom and pushed him to experience the “climb through myth.” Speaking with Lowe over the phone about his experiences during the climb, he said, “Having formed almost a relationship with some of the people who died on the Eiger – that they were more in my mind – I just imagined that I knew them and I thought I that I could feel their spirits with me sometimes.”

His experiences on the Eiger will be the spine, or referral point, for the rest of his life in the biographical documentary Metanoia, as his most profound introspection occurred during the legendary climb. Metanoia‘s Production Manager Connie Self is the only other person to work full-time on the movie alongside Lowe; she speaks about Lowe’s story as if she was there herself. “As he climbed, he recognized places where people had been and died. From his vantage point he saw solutions that might have saved their lives. He saw possibilities they didn’t see.”

The filmmakers hope people will be inspired by the movie, as Self says, Lowe often inspires others. What they aren’t striving for is a typical, technical climbing film that is of no interest to non-climbers. Lowe wants people to get a feel of what it is that attracts climbers to the places they go. “Part of climbing is that it is kind a self-reward that is not what you first think of when you think of climbing,” Lowe said. When a divorce, financial troubles and enduring separation from his cherished daughter left his life in shambles, he decided now was the time to experience clarity through the best meditative art he knew: climbing. “I came to think it would be a good vacation; climbing has always been that for me. A way to put other things aside and connect with myself in a way so that I’m stronger when I reenter the world that has those kinds of problems.” While not many climbers discuss the introspective aspect of climbing, there’s no doubt that it’s there. Intense physical activity and undeniable focus on your next move has given Lowe a glimpse of an enlightened state of being, especially on the Eiger. “I found climbing over the years to be the best way to cut to the core of who you are,” Lowe said. “On this route…. I came away with a lot more than I ever had hoped for. I had hoped for just a rest from my troubles, but I came away with a lot more than that.”

The film will emulate Lowe’s inherent attitude of living “in the moment.” After a lifetime of more than 1,000 first ascents, adding to his thousands of climbs, Self said Lowe still approaches life this way, though he is now confined to a wheelchair. “People close to Jeff joke about his ‘first ascent’ into a unknown neuro-degenerative process that doctors do not have a name for, Jeff is the first such person with the disease,” Self said. “His decline is fairly rapid and continuous. His respiratory muscular issues are most obvious.” Although the physical act of climbing is now unimaginable for Lowe, his brain is still intact and he has transferred his dedication to his biographical film which he’s been diligently filming since March 2010.

A small crew of 20-30 devoted people, working when they can, has been compiling archival footage, conducting interviews, recreating important scenes and gathering still photographs. Lowe’s own brother and fellow climber, Greg Lowe, has taken on directing the film. Narrating the film to give character to unique terrain and more, will be the writer and climber Jon Krakauer, known for Into the Wild, the account of Christopher McCandless, who died seeking solitude in the middle of Alaska, and Into Thin Air, a non-fiction novel of a devastating disaster on an expedition on Mt. Everest in 1996.

The producers originally wanted to get the film out in the fall of 2011, though the actual release will likely not be until January 2013, probably at the Sundance Film Festival. They are still gathering archival footage and filming scene re-creations. The process goes slowly when you try to work against the weather on a mountain filming dangerous scenes. “When you’re talking about being 5,000 feet off the ground to recreate a fall, you’re talking hanging cables, very heavy cables, lots of climbing equipment, lots of backup so that this climbers remain safe,” Self said. “It’s just technically difficult.”

Gorgeous western United States mountain scenery where Lowe did most of his climbing, an account of his career, his family and that spiritual aspects of climbing is what you will find in Jeff Lowe’s Metanoia. Look for the film slated to premiere January 2013, and support its making at www.JeffLoweClimber.com.

Along his climb, Lowe left his pack attached to a wall at his last placement of protection. He climbed higher, looking for his next place to put in protection. But he found nothing and with time running out, he climbed unroped for the last 50 feet of the climb to meet the helicopter that was to take him down off the mountain. For almost 20 years, the pack lay frozen, until his film crew came upon it and recovered it. Watch the clip and click here to read the full story.

Photos and videos republished with permission, courtesy of www.JeffLoweClimber.com