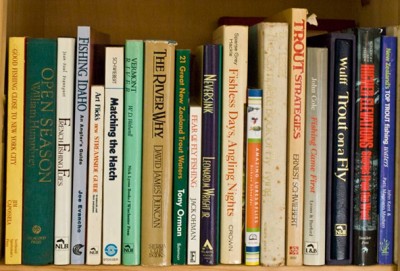 Whether you think that print and publishing are dead or not, the medium is really a great gift for anyone who loves being in the outdoors. A book requires no energy to read and can be the perfect companion on a rainy day indoors, a sunny day outside or for entertainment on a long hike or hunt. With the gift-giving holidays approaching soon here is a book or two for the  __________ on your list.

Child: To introduce young children to the wide variety of animal species, and to bring out the artist in them at the same time, take a look at Ed Emberley’s Drawing Book of Animals which is a step-by-step instruction book on drawing the many emotions and cartoon faces of animals.

Build your child’s outdoor enthusiasm by getting them interested in being in the outdoors early. Nature’s Playground: Activities, Crafts and Games to Encourage Children to Get Outdoors by Fiona Danks and Jo Schofield is a guide to hours of outdoors activities like building a den from branches, making twig boats to sail in ponds and more.

In addition to our suggestions, the ecotourist agency Greenloons has made their own recommendations for children who are environmentally-minded. Find their list of books divided by appropriate age group here.

If your environmentally-conscious friend or family member has already read Silent Spring, (it’s a popular and debated one) consider getting Alan Weisman’s The World Without Us. Winner of multiple awards and mentions including Time Magazine’s #1 nonfiction book of the year (2007) the book looks into what would the world be like if humans were to suddenly and completely disappear. A provocative and scientific assessment of how the environment, animals, and all the natural processes humans impede would react when left to reclaim the surface of the earth.

Survivor: A great place to start looking at survival techniques in the woods is Bradford Angier’s How To Stay Alive in the Woods published in 1998. It’s small and compact and can easily accompany your brave soul in the woods.

For those more primitive survivors, Thomas Elpel’s book Participating in Nature: Wilderness Survival and Primitive Living Skills goes beyond normal survivalist books, but approaches each technique based on the environment you find yourself in.

Gun collector and shooter: To begin your search for the perfect book, open up the webpage North Cape Publications, Inc. The publishing company has an expansive library of collector’s books, shooter’s and collector’s guides and more on gun history. Highly recommended The AK-47 and AK-74 Kalashnikov Rifles and Their Variations and The M16/AR15 Rifle by Joe Poyer for the modern shooter and Terence W. Lapin’s The Mosin-Nagant Rifle for the collector.

Hunter: Now there are many different types of hunters out there. To appease most of them, the book Hunting would be a good place to start looking for interesting stories for your hunter. Hunting is a collection of stories from various authors published in 1897 about hunting big game in America, camping and hunting, and exploring the untouched wilderness.

For specific hunting types, check out the following books.

Spiritual Hunter: James Swan’s In Defense of Hunting. Written by a biologist, psychologist, conservationist and producer with a deep interest in American Indian spirituality and practices defends hunting as a viable and instinctual source of food and a chance to reconnect with nature.

The Huntress: Georgia Pellegrini’s Girl Hunter: Revolutionizing the Way We Eat, One Hunt At A Time. For women just getting into the sport of hunting or becoming curious about it, read how Georgia Pellegrini transitioned into the sport only after graduation from Wellesley College, Harvard and the French Culinary Institute in New York and after working some time in the financial industry. The book comes out December 2011.

Fisherman: Jim Capossela’s Good Fishing Close to New York City gives city dweller’s the places to seek out their escape and just fish. There are many regional guides out there, just start by typing your region, city, or state into a search engine online.

For extreme, thrill-seeking fishermen, check out Jeremy Wade’s River Monsters: True Stories of the One That Didn’t Get Away. The Animal Planet TV host of River Monsters puts into print his collection of the most extreme fishing stories including getting arrested as a spy and surviving a plane crash all in between.

For fly fishermen, recommended is Vermont River: The Classic Portrait of a Man and His River. Beautifully written by W.D. Wetherell, a fisherman and author who loves his sport and region in which he fishes. It was selected by Trout Magazine as one of the thirty finest fly fishing books.

Gatherer: An older book published in 1973 that’s great for foraging in the wilderness is Alan Hall’s The Wild Food Trailguide. Each page contains an illustration of the edible plant in question and also a shaded-in region on a map of the United States where the plant can be found. How to identify it and which part is useful for eating or even medicines such as a natural aspirin or tobacco.

Also don’t forget about Girl Hunter mentioned above under the “Huntress” section.

Camper: While campers it seems to me would enjoy more classic piece of literature, magazines, romance novels, motorcycles, biographies, pretty much anything not related strictly to camping, here are two books (two of few) that touch on the subject of camping (and cooking in this case). First, 101 Camping and Outdoor Recipes Cookbook by Lou Diamond, a collection of great-tasting recipes that go well beyond the traditional s’more.

And a blast from the past, first published in 1881, Hamilton Gibson’s Camp Life in the Woods and the Tricks of Trapping and Trap Making enable a serious and long-term camper to procure food for himself in the wild without the use of firearms or other weapons.

While there’s a publication out there for almost every region or city one can hike around, there’s one guide who incorporates any and all hikes and climbs. Alexandra Buisse suggests how to exquisitely capture those sites so far away from civilization in her book Remote Exposure: A Guide to Hiking and Climbing Photography so that far-away adventurers won’t be disappointed with their photographs they thought so well captured the sites they saw.

Bird-watcher: A tale of a 1998 birding contest all across America retold by prize-winning journalist Mark Obmascik, The Big Year: A Tale of Man, Nature, and Fowl Obsession.

And last, but not least, catch a peak at wildlife photographer and birder Jim Foster’s new book describing birds along each of Texas’ trails, Birding Trails, Texas.