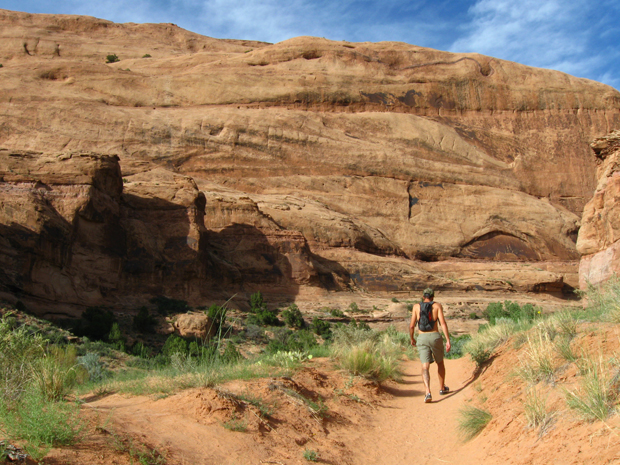 Coasting down the western side of the south Rockies in Colorado at 60 MPH and hardly losing any gas down the mountains, I thought, “this ride is epic.” The scenery was verdant forests growing on a mountain edge, occasionally opening up on a plain peppered with supply shops and cabins barely in sight. Of course, mountains and cliffs jutted out in my periphery and slowly added to the background in my rear-view mirror. On a full 10-gallon tank of gas we rode 450 miles, only occasionally getting out of neutral to speed up a slight incline or to stop for some food.

The drive through Colorado heading toward Utah.

Two friends and I were driving to Moab (pronounced Mow-Ab), Utah for a weekend camping/hiking/exploring/jumping-in-springs-off-a-cliff trip in the summer of 2009. For three weeks I went to visit my friend Kathleen who was living in Dillon and our friend Zach who was living in his car on Kathleen’s driveway. This was the furthest west I had even been in the States and so naturally we wanted to explore the region when Kathleen wasn’t working. Moab was on everybody’s lips in our group of friends in Summit County. We heard of the stunning creeks, the heat and the unique terrain where lush mountainside meets the desert.

The first chance we got we packed up the minimum essential supplies: food for the road, a camping stove top for macaroni and cheese on the cliff side, our sleeping bags and bathing suits. Because we lacked a tent, we packed an air mattress instead just to put an extra layer between us and the snakes on the ground. It just so happens to be that an air mattress is a pretty comfortable camping addition. Lucky us.

Five hours of breathtaking sights later, we arrived in the tiny town of Moab. We laughed at the “Utah” way of naming streets in the city, South 1st East Street, East 100 North Street, South 400 East Street and so on. From Moab there is an entrance into the 77,000 acre Arches National Park where the “Delicate Arch” is located, the famous arch found on Utah license plates.

Besides driving by the park entrance, we didn’t see any of it. We came to Moab for another reason. Arches National Park overshadows many smaller free sites. We knew of a hike along Kane Creek south of Arches. The creek runs into the desert through red cliffs and canyons that are unique to Utah. We wanted to find the 30 foot cliff that hovers above a well of water running from the creek that we had heard of through word-of-mouth in Colorado. It was apparently just deep enough to jump into from 30 feet if you take off from the right spot.

Of course this was not part of a national nor state park, just an unmarked wildlife preserve, which means it was incredibly hard to find. We had almost given up hope on our drive there, we were turning around often, driving too far or not enough. Eventually we found the parking lot and the creek our friend described.

The walk through the desert vegetation was incredible, not something I had ever seen before. There were light pink flowers that appeared to be made of paper, dry purple, green and blue grass, rough rocks that enticed you to climb them and many years’ worth of exploration all around us.

We were told to follow the creek to the waterhole, where we would find the cliff. The path through the wilderness was confusing and we crossed over the intertwining creek numerous times and decided to turn right when we came to a fork in the creek. The further and further we went, we couldn’t find this 30 foot jump. The best we came to was a water hole already spoken for by tons of crayfish. I was the only one brave enough to join them in the water for a few cool minutes to soak off the sweat from the day’s hike before we turned back.

We left enchanted by the edge of wilderness we encountered that day, but also a little disappointed that we didn’t get to fully utilize our bathing suits as intended. We’d try again tomorrow, turning left at the fork in the creek this time.

We didn’t drive far to get to our campground that night. We had found it by chance too, therefore my best guess as to where we stayed is King’s Bottom Campground, based off of the photographs I had seen online, since none of us grabbed brochures from the site. It was an amazing, unusual campsite that I’m not used to in the Midwest. There were only a handful of sites to choose from so some people shared (plenty of space), no reservations accepted, the sites were each unique and none was closer than a three minute drive to another. We nabbed a beautiful spot at the bottom of a giant red rock with a picnic table and fire pit. Nowhere but Utah would we find a spot like this. The campsite at King’s Bottom Campground

In the morning we didn’t waste any time getting back to the creek to explore further. The left turn at the fork in the creek proved to be bountiful. From a distance we could hear splashes and giggling. When the 30 foot jump was in site, the next obstacle became getting to the top. But where to go? We saw the water hole below the cliff but it was still far away and surrounded by woods with no path in sight. Eventually two adolescent chubby brothers ran by us soaking wet and smiling happily. We stopped them to ask how to get to the top since they had clearly just jumped and were running back to the top again. Walking over one of multiple creek junctions to get to the 30 ft. cliff jump.

They lead us toward the beginning edge of the cliff and instructed us to follow them steeper and steeper up the cliff side, leaving behind the trees. The slanted but flat rocks up there made me feel like a mountain goat just for an afternoon. Jumping from rock to rock satisfied a childish whim inside me. Then came the 30 ft. cliff jump that we came here for, our destination! It was daunting. Thirty feet didn’t seem so high when spoken. Then my heart rate increased and I felt like I had just shotgunned 30 cups of coffee and was shaking nervously. A long breath of air later I decided I didn’t want to do it. Zach braving the jump down 30 feet into water dangerously close to jagged rocks.

Below me all I saw were green and brown rocks under clear water, an extension of the cliff we stood on. If we didn’t jump in the correct spot where the rock opened up in a small perhaps 6-foot-around circle, we would risk breaking our legs, back, getting knocked unconscious (jumping head-first wasn’t even an option), and then how would we get help an hour away from our car through creeks, rocks and trees? But those thoughts really only went through my mind for 30 seconds. Then I thought, “screw it, I’m already here” and I held my breath and jumped. Perhaps I screamed? I can’t remember. The only words that come to mind that describe the experience are: exhilarating, refreshing, awesome.

At night we drove north past Moab and took the “scenic highway” west along Arches National Park to another spot we heard about through word-of-mouth: a campground on a cliff side, totally isolated. We didn’t have as much luck with this campsite like we did with the cliff and water hole and the campsite remained hidden from us. We drove and drove but our stomachs ultimately got the better of us so we parked it on a not-too-shabby consolation site.

Here is where I’m continually amazed by my ’94 Geo Prizm that lugged us all the way up and down canyons and mountains and made it from Michigan to Colorado and back. There were some tricky situations where we almost lost the Geo to the sand near our campsite, but in the end, it made it all the way to the top of the canyon where we decided to set up camp for our second night in Utah.

It got dark quickly before we could finish our meal and the wind was ripping our equipment away, blowing dust in our face. We decided to stick it out because we had yet to camp in such a scenic spot in our lives. It got late so I blew up the air mattress and made the mistake of leaving it unattended and not weighted down. With one sharp gust it sailed off the ground and smacked into Kathleen as it flew down the side of the canyon before we could grab it when we realized what was happening. “Oh crap,” was our first thought. It was dark now and we had a rogue air mattress.

With the wind increasing and our mattress at the bottom of the canyon, we decided it’d be best just to pack up camp and go back to our site from the night before. We slept under a light mist that night after having gone for a proper walk upon returning to our original site. The moonlight illuminating our path was amazing. It remained really dark, but it left a gray shimmer over every contour of the soil and vegetation. I constantly thought I was seeing shadows dancing and forming into animals coming out of the corners of Utah at midnight in Moab. The wind stopped the bugs from eating us alive that night and the mist cooled us off until we were snoozing like babies with the biggest smiles on our faces, dreaming of the next time we would come back to Moab and all the sites we’ve left unexplored.

It took a lot of research to relocate these spots from 2,000 miles away. To get to the hidden waterhole, turn west onto 4th Street, otherwise known as W 400 N St. Take that until it ends or possibly turns into Potash Road. That’s the thing, it was incredibly hard for us to find, too. Now, I’m sorry, but from there turn either left or right or go straight… Either way, look for a parking lot that’s near a water source and follow the crowds. That’s the best I can do.

The campground we stayed at was most likely King’s Bottom Campground, south of downtown Moab then east. To get to our tucked away cliff camp spot, head west up 191 after you pass downtown Moab going north. You’ll be riding along the edge of Arches National Park and there will be rock climbers climbing just above the road you’re driving on. From there I have no further advice. I wouldn’t even know how to get back to where we were. Keep driving until you’re hungry.

Photos: (license plate) Jerry "Woody", all others by author