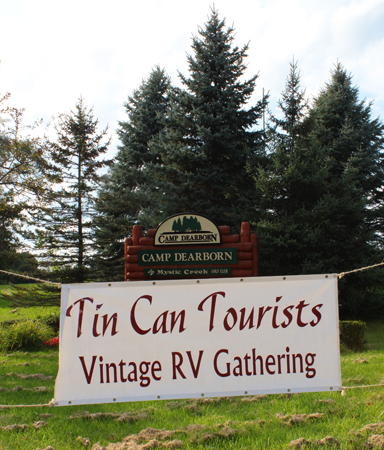 There are always those rare times on the road when you’re driving along and a 1933 Ford Coupe or a 1926 Bentley Tourer will appear in view; you’ll forget to drive for a minute and just awe at the preserved beauty. Perhaps you’ll even have the even more rare occurrence of seeing a vintage trailer hauled behind the vintage car or think about the last time you saw an Airstream trailer.

That’s what the Tin Can Tourists organization is all about: the celebration and preservation of vintage trailers and motor coaches. The club gathers annually in Michigan and Florida and hosts rallies located at various locations in the United States to exchange information, celebrate and show-off their vintage trailers. You need not have a vintage trailer to attend, unless you partake in the contest to judge them.

My boyfriend and I attended the last meet-up held in Camp Dearborn in Milford, Michigan the weekend of September 23rd. Though without trailers, we were welcomed by the organizers, Forrest and Jeri Bone, and took a long walk around the vintage-filled campsites. We spoke to the very enthusiastic and friendly owners who invited us to take peeks inside the trailers with no inhibitions. Here’s what we saw. The inside of the Aerocar Trailer was fabulously restored.

The Tin Can Tourists prized exhibition. This is a 1938 International Tow Vehicle and 1936 Aerocar Trailer. From the sign posted by the entrance to the trailer, I learned that this Tow Vehicle is a one-of-a-kind custom vehicle designed especially to tow the Aerocar Trailer. The owner commissioned the International Truck Plant in Chatham, Ontario to build this prized vehicle. The Tow Vehicle was self-contained as it was meant for a chauffeur. He had his own bed, sink to wash his hands (seen on the side behind the open door), storage and an intercom system installed to reach his passengers. Combined, the two units measure 35 feet in length and approximately 5 tons in weight.

Using airplane principles, Glenn Curtiss invented the Aerocar Trailer in 1927 to make a lightweight but strong trailer to travel over country roads. The particular trailer I got to see was a 1936 model. All Curtiss Aerocar Trailers were custom made per customers’ requirements and built in Michigan by the Aerocar Company of Detroit. The original owner was William Gray, a Canadian whose father Robert Gray had pioneered the production of Gray-Dort automobiles in Chatham, Ontario. In the late 1930s, a model such as this would sell for about $5,000.

Unfortunately, we didn’t have placards of information for every trailer, so most of what we found out about their history is from talking with the incredibly eager and friendly trailer owners.

The trailer shown below was hand-made by a family member of the owner. It’s small and quaint inside with a stove, bed, closet space and even toilet. The green walls can even be taken down and the roof can be collapsed to cover the trailer when in transit. This one was for sale, too! Each trailer we viewed was well kept and some had even been fully restored, as seen in the wooden interior in the trailer pictured below. It was mind-boggling to see a calendar from 1948. The imagery is so classic! The children’s sleeper pictured right and below was definitely a trailer that caught our attention from a distance. Many trailers had similar shapes and build, but this one was slightly odd because it was built especially for children. The inside compartment was tiny, built for children no older than young teenage years. The back lid opened up and there were compartments for storing anything you needed to go camping. The children even had little shelves and lights inside the sleeper cabin. There was a lack of awesome cars like the Victoria, but there were enough Airstreams to make up for it. All different years, sizes and styles were present. You can see additional photos of Airstreams and more of the vintage trailer show on Outdoor Hub by clicking here.

After circling around the main part of the campsite filled with just under 200 Tin Can Tourists, we came upon one of the last motor coaches we would see for the day. These two were very interesting. A father and son had coaches resembling each others. Obviously these were bigger and harder to maintain, but the important parts were maintained. The engine was basking in the sun waiting for a passerby to notice its brilliant cogs.

The father had painted the side of his motor coach bus to resemble a panoramic wooded nature scene, appropriate for the purpose of the vehicle.

At each trailer that we stopped by someone either ran over to us excited to show us around and tell us about the trailer’s history. Some trailers even offered up old-school candies and treats or informational flyers. It was good to see the tradition of showcasing trailers renewed again. The organizers of the club renewed Tin Can Tourists only in 1998 after a long period of inactivity between 1985 and 1998 after the original inception of the club in 1919. Their numbers have grown from 21 rigs at the renewal gathering to over 1000 members and growing today. Visit their website to learn more about this awesome organization.

Click here for even more photos and a video with more in-depth history by the organizer and director, Forrest Bone.

Photo: (Red Victoria) Matt Arnold (all others) by author