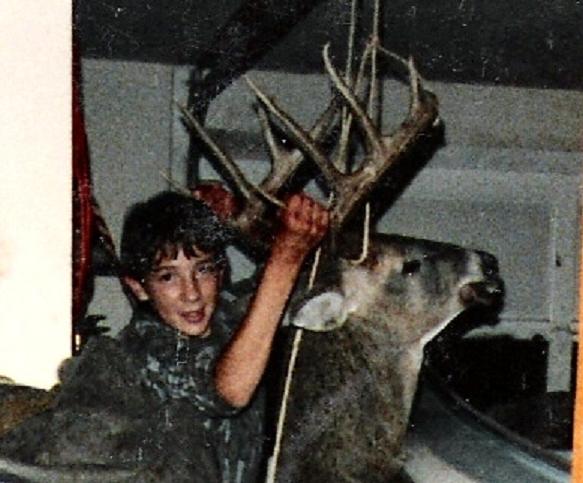 (I have been fortunate enough to take several whitetails with my bow. It was not till college that I decided to start writing stories of each successful whitetail buck that I had harvested. Each story was a great moment in my life that I will never forget. I hope you enjoy reading them all. This first story was written 14 years ago while I was in college. Some of the information is not current, but the story is exactly as I remember it.)

If I could pick the one thing I enjoy doing most in life, it would be bow hunting whitetail deer. My parents bought me my first bow when I was seven years old. It was white and made of fiberglass with blue stripes around each end. The arrows were made of wood with a lethal lick and stick point. Although I was not old enough to hunt, it never stopped me from practicing, and my sister’s cat made a great target. I received my first hunting bow when I was thirteen and practiced non stop for the upcoming bow season. The only difference, I was no longer allowed to use the cat for target practice. I had hunted deer with a rifle for three years and was no stranger to the woods, but taking a whitetail with a bow was a much greater challenge. I know people that bow hunted for years without harvesting a deer….my wait would not be so long.

It was October 15, 1988 and the leaves were just beginning to change color. Peering out the window of my junior high biology class, I began to get restless as the clock grew closer to 2:30. Finally, the bell! I hurried to catch the bus because my Uncle Floyd was waiting at my house to take me hunting. Normally, I would go with my father, but he and two of his brothers were rifle hunting mule deer in Colorado. I reached home at 2:45 and was out the door by 3:00.

We parked by some railroad tracks off the side of the road and headed for the woods. I chose to hunt the stand my father always hunted. Two evenings before, I hunted this stand and saw what I believe is still the largest whitetail buck I have seen to this day. I would guess around 170 to 180 inches. I was almost able to get positioned for a mere fifteen yard shot, before he caught a little noise my stand made. Needless to say, I never got a shot, and was very disappointed. My father had also spotted two large bucks from this stand before going to Colorado. It was a permanent stand made of wood about eight feet off the ground. The stand was located on the north side of a ridge, with a thicket thirty yards to the south and east of me. It faced a hump filled with oak trees that led to another ridge. I reached my stand at 3:30, which gave me about three hours to hunt. The woods were quiet, with a slight southerly breeze whispering through the treetops. As the evening wore on, I began to replay in my mind the event with the big buck a few nights before. I kept saying to myself, “If I had just been a little slower with my movements”.

By this time my anticipation to see a deer was growing strong. I was out to shoot the first deer that presented me with a shot. For some reason I remember having a good feeling that night, and really thought I was going to score. I began to scan the woods looking hard for any signs of movement. But as the sun started to disappear in the west sky, doubt started to fill my mind. I began thinking of the next time I would be able to hunt again, when I caught movement from the corner of my eye. Slowly moving my head, I focused on the hump my stand faced. I watched as a large whitetail buck lifted his head to lick an overhanging branch. In an instant, my heart and body froze. Then, before I knew it, my legs started to dance without permission. I tried hard to get them to stop shaking, but anyone who has ever been deer hunting realizes how hard this is. The deer was about seventy yards away and slowly feeding on acorns in my direction. With the sun quickly disappearing over the horizon, I began to worry I might not have enough light left by the time he reached me. Not knowing which trail he would take, I stood waiting to position myself for a shot. Finally, he started moving at a slow steady walk toward the trail that would cross on my right side.

I knew the moment had arrived. All those hours of practice, all the arrows I’d shot at my sister’s cat, would come down to this one moment. He crossed the small ditch about thirty yards in front of me. I quickly scanned the area ahead of him and saw an opening about twenty-five yards away. He was still at a slow walk when I began to draw. Before I could get to full draw, my arrow fell off the rest and I had to let my bow back down. I had a tendency to pull to hard with my fingers and pull the arrow off the rest. By now he had already passed through the opening. He must have caught my movement as I let down. Stopping just past the lane, he looked my way to see what had broken the serenity in his domain. I froze! The showdown had begun and I had no intention of losing. My bow arm was still extended holding the bow. After what felt like a couple minutes I began to shake. I could only see the left side of his face and rack, so I began to count the points. I counted five points on his left antler, before he moved his whole head around the tree to get a better look at what I was. Looking ahead of him, I quickly realized I had not shots. I began to think I had missed my opportunity, but still remained motionless. By now, I was beginning to lose strength in my arm. I hoped I would still have enough strength to pull my forty-five pound bow if given another chance. Finally, the buck had seen enough. Instead of running up the ridge where I could not get a shot, he turned and started back through the same opening he had just walked through. This time I was waiting for him at full draw. When he hit the opening, I released my arrow and heard a thump. He bolted, crashing through the woods the same way he came from, stopping where I had first spotted him. After a couple seconds, he turned and quartered back toward me crashing down the ridge toward an opening. He sounded like a freight train barreling down trough the timber. I grabbed another arrow and began to lace it up when silence took over the woods again.

I was not sure if I had hit him because it was near dark, so I sat there a minute trying to calm myself. After a few minutes I decide to get down from my stand and look for my arrow. I looked all around where I had taken my shot and couldn’t find it. I honestly thought the thumping sound was a stump and started to think I had missed. It was dark enough to barely see by now, so I pulled my flashlight out and turned it on. Shinning it on the trail, I instantly saw blood. Once again my heart started to pound. By this time my uncle had made his way over to me and asked what all the noise was. He was in a stand only eighty yards from where I shot the deer, just on the inside edge of a thicket. I tried telling him I had shot a ten pointer, but was so excited nothing came out. I finally calmed myself down enough and told him the whole story. He decided we should give the deer a little time. We waited about twenty minutes and started to track him. The blood trail was easy to follow. As we pursued the trail back west, we saw him laying on the edge of the opening where I had last heard him. He was down! As we approached him I remember thinking he was a lot bigger than I thought. When I first spotted him from the stand I knew he was a good buck, but not nearly as big as the deer I witnessed just two nights prior. We decided to leave the buck there and later returned with half an army to help pull him out. Along with my Uncle Floyd and myself, my Uncle Randy and his friend Johnny, my mom, sister, cousin Brandi, and even my Grandma came with us.

Looking back now, I realize how rare it is to see a whitetail buck of that caliber. I know I had some beginners luck on my side, but I have definitely paid my dues since then. I have hunted deer for seventeen seasons with a bow and strive each year to get one bigger. Although I have taken some nice bucks, I don’t know if I will ever shoot another buck of that caliber. One thing is for sure though, I will never quit trying.