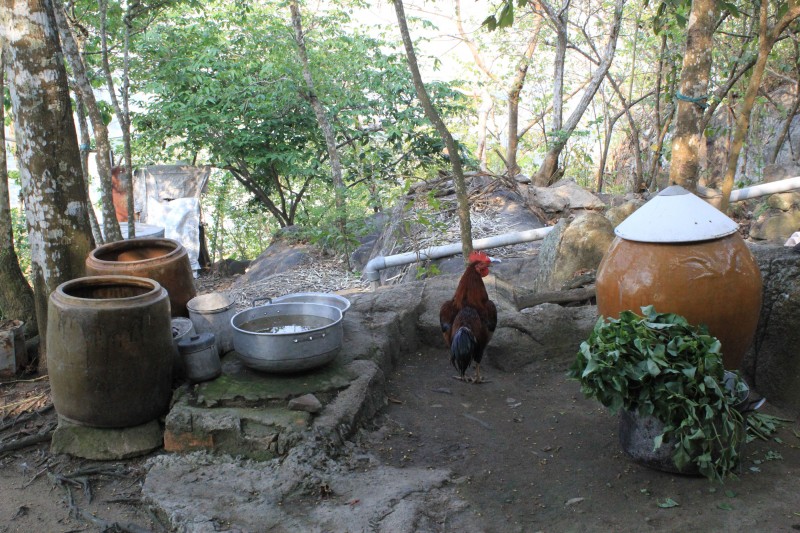 We must have been few of the only Westerners on the mountain at Chau Doc, Vietnam. Or perhaps the group of teenagers who stopped to take our picture as we were hiking from the pagoda at the base to the back side of Sam Mountain thought we were celebrities?

Wherever we went, we were ogled by the other Vietnamese hikers and inhabitants. They rarely saw non-asians as there weren’t many tourists there, especially Americans likely because of the relatively recent Vietnam war. Those that did visit were mostly from Europe, namely France who had colonized Vietnam until World War II.

The Vietnamese that lived on the mountain counted on our business since they could charge us three times the asking price of nationals. We knew and we didn’t dispute, because even the hiked-up price still meant an incredibly cheap meal at $1 to $3 USD (drinks included). For the most part, every family offered drinks (coffee, smoothies, beer) and usually rice or noodle dishes for sale out of their homes. Hammocks for customers stuck out from among the rock that paved the path on the mountain because everyone was looking to bring in as much extra money as they could.

What boggled me was the open-air lifestyle that the people on the mountain lived since their houses consisted of a metal roof strapped to whatever long beams they could afford as support structure. The inhabitants would also often occupy the hammocks for a mid-afternoon nap. I saw many woman serving meals and drinks while their husbands napped outside.

When I saw a man snoozing on a hammock at one o’clock in the afternoon, my first thoughts weren’t that this man was lazy. The Vietnamese have completely different internal clocks than the locals of any other country I’ve seen. Some of those that work at night, take rest during the day. If New York City is a city that never sleeps, Vietnam is a country that never sleeps. At 3 o’clock in the morning my fellow travelers and I walked the streets in Chau Doc to fill up on delectable juicy treats at a fruit stand, to get a hot meal and a cold avocado smoothie and hung out with the neighborhood who was always awake (thanks to my friend Tanya’s Vietnamese).

The people in Chau Doc and on Sam Mountain were especially curious of us since they saw very few Westerners. They would ask and inquire no matter whether they knew enough English to understand our answers. And they were constantly smiling. Trying to exude to you their friendliness. I heard stories from other travelers about speaking to a Vietnamese person and asking if they speak English. They nod and smile and say yes! Then the foreigner asks for directions. The Viet looks confused so the foreigner asks again, “do you understand what I’m saying?” The Viet nods and says yes when really the only word in English they know is “yes.” They’re just nice and agreeable people.

As is pertinent to most of Vietnam, we met only nice people all the way to the other side of the mountain in Chau Doc. They were definitely interested in meeting us but had learned to survive without Westerns after the departure of the French. Motorbike-taxi drivers in Chau Doc weren’t frenzied following you in the streets shouting over one another “Hey lady, you need moto?”, or “moto, madame?”. The people on the mountain had fallen into a quiet lifestyle on the calm terrain. The heat helped to subdue their excitement and energy though children still managed to find spare energy to run around and play with the other children. And the meals they prepared were as delicious as ever, my fondest memory of Vietnam.

This story is part of a series on Chau Doc, Vietnam. Find more on climate and landscape here.
All photos by author.