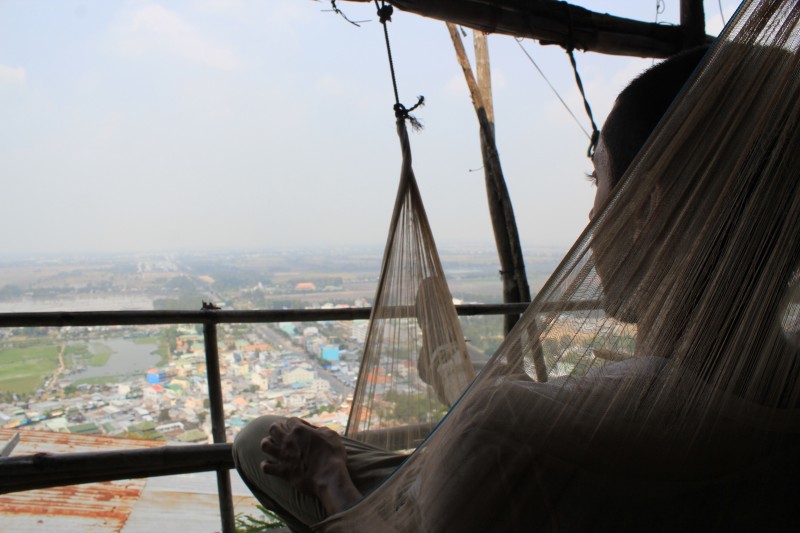 To get out of the extremely hectic and polluted Ho Chi Minh City in Vietnam, my two friends and I headed six hours west toward Cambodia. Tanya was studying abroad in Ho Chi Minh, formerly Saigon. Her brother Eric taught English at one of the many language schools in the same city. We originally came to Châu Đốc, pronounced “Chow Dohp,” to camp under the stars in the forest atop Sam Mountain at the border of Cambodia. Upon arrival we decided against it because without a tent we had no protection from the wildlife in the area and worse, all the bugs that crawl about in Vietnam. Some of these critters are potentially deadly, so we decided against roughing it out in the open.

Sam Mountain was about 7 km away from downtown Chau Doc; by downtown I mean the little main streets that offered up a few meager hotels, restaurants and a pagoda  (place of worship; typically a tiered tower). Pagodas were a common site in Vietnam and when we took motorbike taxis from downtown to Sam Mountain, we were dropped off at a pagoda at the base of the mountain. This was the last time we saw any Westerners for the rest of the day.

It wasn’t until 2 pm that we began the serious ascent. Hiking with two guitars, a camera, a small pack with a change of clothes, journal, and small items like a wallet and cell phone was too much for the midday heat in April, Vietnam’s hottest month of the year. The high on average is about 95 degrees Fahrenheit. Lows are at an average of 80 degrees. That day it must have broken 100. The heat was disorienting. Sweat seeped out of pores I didn’t even know I had. Everything was wet; it was like we had just gotten soaked in a pool. The inside of my bag was moist from my sweat-drenched back. To do anything, to make a decision, took an enormous amount effort just to get our thoughts straight. To convince your body to move against the immobilizing heat really required a mastery of mind over body.

We thought we would be walking through a tropical maze of semi-dried out shrubbery and snagging great views of the village below us and the scattered rice paddies. There must have been steps carved into the rock-side for years, because they were smoothed to perfection. Families lined the path upward in their extremely open and public homes – roofs made from sheet metal fixed to support pillars. The lifestyle of the Vietnamese who lived on the mountain was bizarre. We passed one boy watching TV in his “living room” which was essentially a make-shift couch resting on rocks facing a TV sheltered underneath the sheet metal roof. If the family was really prosperous, there would be one or two sheet metal walls laid against the roof to hide the “living room” from the sun. We saw only one TV. Almost every family’s house doubled as a restaurant or cafe and for 10,000 to 30,000 Vietnamese Dong, ($1 to $3 US Dollars) we bought a Caphe Sua Da (iced coffee with condensed milk) to cool off and wake up and rice or noodle dishes to fill up.

We rested often on the multitude of hammocks offered by almost every hut on the way up for their guests to enjoy their caphe sua da or Tiger beer. The waning sunlight beckoned us to find a spot to gaze at the distant, gargantuan spec of orange sun dip below the Cambodian rice fields. The heat seemed to have a calming effect on everything, making the trek serene and slow. We felt like we were characters on the twilight zone, the first explorers in a desolate land where unknown creatures lurk.

We walked further near the top of Sam Mountain to a place where the three of us could strum a few chords on the guitar to accompany the slow descent of the sun through a clearing in the shrubs encompassing the mountain. After a day of hiking in extreme temperatures, we blessed the setting of the sun. With it went the glare and incessant heat. Soon, short sleeve t-shirts would be comfortable again instead of constricting. I looked forward to the motorbike ride down the back side of Sam Mountain to Chau Doc. Whipping through dirt country roads, eventually onto cement as you near the town, is something more refreshing than a full-body submersion in cool, fast-running river.

This story is part of a series on Chau Doc in Vietnam. Read about its people here.
All photos by the author.