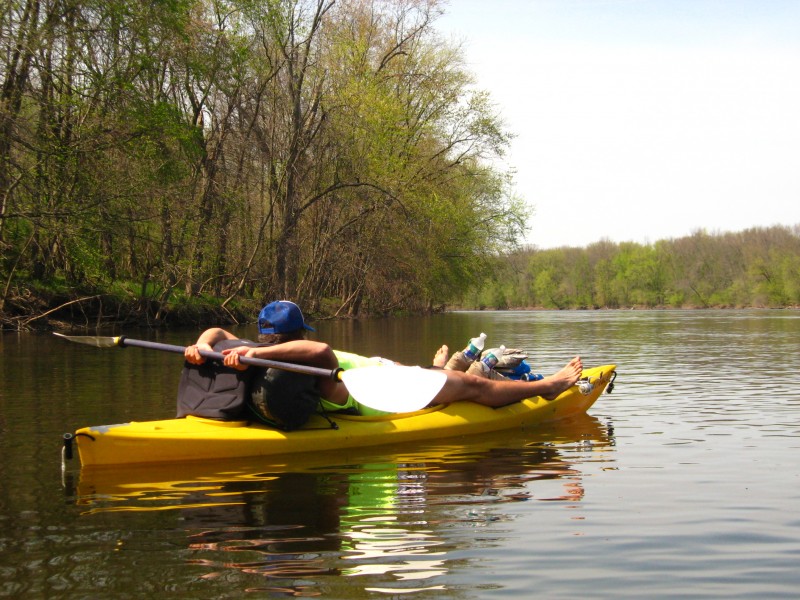 I’ve discovered the secret to a fresh, clean face and the best natural slimming medicine, better than proactiv® and Slim-Fast®. All you have to do is take a five-day kayak trip along the Grand River starting at the campus of Michigan State University and ending at a big blue freshwater sea, otherwise known as Lake Michigan. Spending five days away from air-conditioning, nights of binge-drinking, and mind-numbing computers and televisions will really work wonders for your health, and your skin will show it. My fellow kayaker told me I looked the best I’ve ever looked in my life following that trip; I was fresh and rejuvenated.

We started our epic adventure a few weeks before we actually stepped foot in a kayak. My roommate and I began by doing a few push-ups daily; right up until the motivation died out. Our companion for the trip, my neighbor, was the quintessential woodsman type; he was studying Wildlife and Forestry at Michigan State and spent all his time either outdoors or in the garage if he felt like he got enough fresh air that day. He didn’t own a computer and was already in tip-top shape to effortlessly complete a week-long kayak trip.

We had never done anything like this and quite frankly we didn’t know how to prepare.  We knew we wanted to start on Michigan State’s campus and end up on Lake Michigan. It wasn’t until the last-minute that it came to us that perhaps a map would be useful in case we came to a fork in the river. My roommate did some research online and magically found us a detailed topographical map of the Grand River and the land around it. It was mostly useful for telling us what was state property and therefore available for camping. We spread the whole route on the floor to study it, and then wrapped it up in a plastic folder to take with us as our guide. None of us could afford a GPS at that time, but what’s the fun in taking one anyway?

We knew the route, but we didn’t know if we were fit enough to make the trip, especially the girls. And what about unforeseen obstacles? How would be deal with a forbidden boating area, animals, illness, or severe weather? We didn’t even know how long it would take for us to get there. We had about 150 miles to go by river. We could make it in a week if we paddled at a rate of twenty miles a day. We made it in six. We had to make it in under a week, I had a job and summer school to get back to.

The most important thing was to keep everything water safe as we’d be surrounded by it all day.  Any slip on our part, and we’d lose our food, warmth and shelter to the element we traveled on. We also had to prepare for the water above us coming down as rain so we each had personal ponchos and rain-gear for the kayak. We definitely made use of it.

We were lucky enough to have been rained on and thrown back upriver by the wind on two separate occasions. On the second day I was so sore and so fed up with monotonously paddling against the wind and the rain that I screamed out as loud as I could, frustrated with the whole situation and angry that I was there and couldn’t find an easy route back home. I ended up dragging my kayak onshore to flat grass and just pulling the boat behind me along the route for a small part of the trip, cursing the whole time. That was my low point in the trip. I wanted nothing but to quit it all now and appear back home immediately like a child fed up with a video game.

It was the end of May so the nights were chilling. We had a sleeping bag each and a 4-person tent for us three and our equipment. My sleeping bag didn’t insulate particularly well and there’d be nights when I woke up shivering. My neighbor and I had really bonded on the river, so I counted on those moments for warmth during the coldest nights. Naturally, we split the essential supplies between our three kayaks and everyone brought a small change of clothes as their personal items, and we bought food from towns we’d pass on the way.

The paddling itself wasn’t difficult the first day. It was difficult on the second when my arms were sore. Portaging was always a hassle and we’d beg my neighbor to stop for breaks constantly, but he knew we couldn’t rest too long if we wanted to make it in seven days. We only took one hour to shower at the YMCA on the fifth day of our trip – our only bath. We’d set out on the river early in the mornings and around 5 pm every night we would begin to look for a campsite. Our campsites were any open area of uninhabited, unprotected, or non-private land near the river bank. We’d have a bonfire every night and were out like babies by 10 o’clock. Retracing our steps on another trip, I can think of one particular campsite I want to go back to. To get there you have to kayak a few hours beyond Grand Ledge until you see very green, thick and short tuft grass on the left bank. If you spot an abandoned, overgrown bulldozer, you’ve found the area and are only 5 days  of paddling away from Lake Michigan.