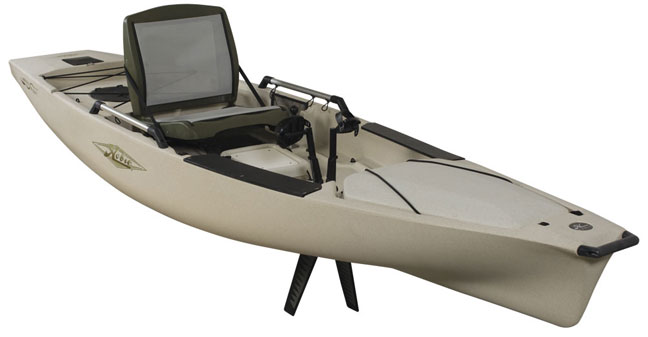 Just like pretty much everything else, fishing goes through fads and phases. There are so many different types of fishing, different techniques, and different customs, that experiencing all of them can be a little overwhelming. Typically, fishermen are divided into two major categories: saltwater and freshwater. Depending on where you live you might be more inclined to invest in gear for one of these than the other.

One fad that probably won’t go away is kayak fishing. Lately you can’t pick up a fishing magazine without seeing somebody in a kayak with a huge fish. The benefits to fishing from a kayak are obvious. It’s similar to bow hunting in that you’ll be getting up close and personal with the animal, and it’s just slightly more challenging when the fish weighs as much as you do. Kayaks can get back into the murky waters where some of the fish love to hang out, and they would never expect to see a line drop from a dark, quiet, sleek shadow resting above their hiding place.

I recently sat down for a chat with a friend of ours over at Hobie Kayaks. The show that I co-host, Backstage & Backroads, is proud to be sponsored by Hobie, and Daniel Lee and I are completely addicted to our Pro Angler series. Our reasons for our mutual obsession with Hobie are evident in the footage in this seasons lineup of us catching everything from the small personal vessels.There really is nothing like pulling a fighting jack crevalle from the clear blue waters of the keys right into my lap in the Pro Angler. Getting from point A to B is fairly simple, also. The pedal driven force can send us along our way at around 7 mph, and when we find the perfect spot we simply drop anchor and pull a pole from one of our many rod holders on board.

When our good friend Keeton began working with Hobie he was already well-known in the fishing world. The fact that he recognized something unique in Hobie speaks for itself now that he’s been there for over 18 months. It’s not that Hobie even needed to target more fishermen, it’s that the fishermen would catch on sooner or later when they noticed all of the benefits of fishing from a kayak instead of from a larger vessel. Many sailors already knew the Hobie brand before they had their logo on the cover of fishing magazines, as the company is well-respected in the marine industry overall.

When I sat down to talk with Keeton at Hobie, I went into that meeting knowing my own experiences with their company. The product is the best out there in my opinion, and I like where they’re going with it. They are marketing to the fishing world in general, bringing this concept of kayak fishing to people who may not have considered it before. In other words, they are opening doors for people to catch more fish, different fish, and maybe even leave less wake along the way. The pedal driven personal watercraft is what we like to call ‘green’, as there are no emissions and it’s carbon footprint is nonexistent. This entire concept of getting the anglers to the fish, as long as they have about 6 inches of water, and getting them there safely and efficiently is brilliant.

When we think of an IFA fishing tournament, we typically think of the pro’s standing on their boats with a full camera crew hovering around to catch the action. Well, Hobie has one-upped even that now. We are all invited to participate in the Hobie fishing tournaments that are geared towards kayak fishing specifically. The benefit of kayak tournament fishing is not only the transportation situation, as it’s very simple to load a kayak up and drive to the nearest tournament, but also the camaraderie that follows. It takes skill to catch a fish, and it takes equal skill (and a sense of humor) to get that fish into a kayak with you to take the photo. As we all know, the fish are sometimes camera-shy. Hobie has literally thought of everything that an angler could need to make this just a little easier. Directly in front of the fisherman on the Pro Angler model, while seated, there is a nice, flat, square cutting board that works as a perfect backdrop for that snapshot.

Of course Hobie kayaks aren’t just for anglers who want to try their luck at tournaments. Although that is a definite option for us now that we have the professional kayak fishing circuit, it’s also nice to load up a kayak and spend the day comfortably fishing in literally any body of water. Daniel Lee and I  have taken our Pro Anglers everywhere from 8 inches of water in a Tennessee river, all the way to the Florida Keys fishing for tarpon. When it comes to accessorizing our Pro Anglers, they’ve thought of everything, including anchor trolleys, horizontal rod holders, and coming soon – a stand up bar for those of us who like to fly fish. This bar will be for leaning, in either direction, and can be used for balance when the waters are just about enough to take your feet out from under you.

There are three main kayaks that Hobie has developed with anglers in mind. The Pro Angler, which I own, is large and sturdy. You don’t necessarily need the stand-up bar if you have good balance. I walk around in mine to fish from the back or the middle areas and I’ve never come close to tipping it over. Of course the Pro Angler isn’t your only option when it comes to fishing kayaks from Hobie. They also offer the Revolution, which is perfect for loading up your gear, going long distance to your favorite spot, and making all of your friends extremely jealous. If that doesn’t do it, then the Outback series will. Both of these other models are perfect for any angler, vacationer, explorer, or adrenaline junky. They’re fast, steady, and they offer pretty much any accessory that you could dream of.

My personal experience with Hobie kayaks has been nothing short of magical. I’ve fished off of what I like to call my ‘back deck’ on a regular basis. I’m sure it’s meant to hold a cooler, a tackle box, or the live-well that Hobie offers, but it also works as a seat. If I had a kid I’d probably strap a life jacket to them and see how many fish they could pull from the back deck… It’s a perfect design, and it means that if you’re traveling light, then you don’t necessarily have to sit in your seat the entire time. My flippers propel me through the waters with ease, and I can always see the look of jealousy on the faces of people trying to paddle with their hands. My hands are too busy fishing to bother with an oar.

There are obviously other companies out there that offer kayaks for fishing. I’ve looked at them, but not for long. Hobie has gone the extra mile to ensure that no other kayak can compete with their innovative design and their overall quality. There are days when I get into my kayak at sunrise and I don’t see dry land until the sun is disappearing and my skin is burnt. I need to know that I’ve got the most trustworthy product between me and the water, and that’s why my fishing kayak is a Hobie.