Embarking on an ultramarathon means committing to run for a very long time. So long, in fact, that you’ll likely run through the day, into the night, and maybe even back into the daylight again. Repeat that cycle another couple times for the longest races out there.

Naturally, running over the course of so many different hours of the day requires a few more pieces of gear in your quiver than your typical midmorning jaunt. And since you’re stuck carrying them with you through to the finish line (or at least to the next aid station, if you’re allowed a mule), those extra items have to prove themselves worth their weight.

It’s hard to rank gear in terms of importance, because everything feels crucial at some point or another. But I’d argue that, no matter what else you bring, you won’t make it too far past sunset without a powerful headlamp. Poles, layers, and all the snacks in the world won’t do much good if you can’t see where you’re going in the first place. The right headlamp holds the ticket to making a smooth transition from day to night. 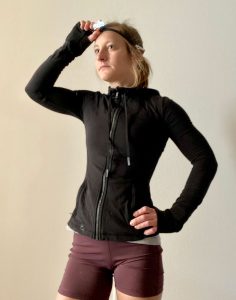 Take a look at the headlamps gracing the foreheads of ultrarunners, and you’re likely to see the Petzl name proudly stamped on most of them. But the brand’s two most popular and affordable models for runners — the Iko Core and Swift RL — have surprisingly little in common. Depending on where you’re running and what you’re training for, one’s going to suit you far better than the other. Don’t take a shot in the dark — get to know your options and gear up right for the long night ahead.

I’ve been able to test both the Petzl Swift RL and Petzl Iko Core on many runs, and I want to get into the weeds about what these two headlamps offer and how to choose which of these Petzls may be right for you.

This one’s for all my minimalist runners out there. You know the type: zero-drop shoes, BOA laces, the shortest of split shorts, stretch-mesh vest, maybe a shirt underneath but probably just arm sleeves. No bulk, no problem. 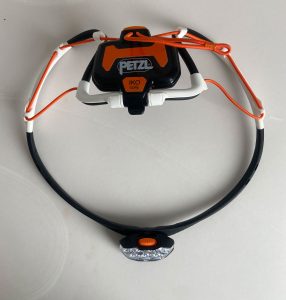 The Petzl Iko Core weighs a mere 79g and sits nearly flat against both the forehead and the back of the head. The battery’s been moved to the back for a much slimmer lamp in front. We’re talking a single centimeter thick. A small button on the top switches between three levels of LED brightness up to 500 lumens. That’s a modest level of brightness, all things considered, but pretty impressive given the weight and space savings.

Instead of your typical stretchy strap, the Iko Core features an AIRFIT headband that mimics the inside of a bike helmet. It felt uncomfortable for the first few runs until I figured out how it was supposed to sit on my head with the back resting securely just under the bone at the base of my skull. The band tightens via a bungee cord. 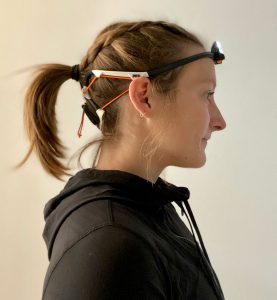 Even though I pulled it plenty tight, the curvature of the band made it feel too loose and low around my ears. I had to continually adjust it as the band kept either digging into the tops of my ears or sinking lower on the back of my head, causing the lamp to shift up on the front and pointing the light too high. Bigger heads will likely have less trouble getting a snug fit.

The battery had no problem keeping up over a three-hour period on the brightest setting. But if you’re out for a full night or more, you’ve got options. The rechargeable battery is removable and replaceable. Stash an extra Petzl Core battery or just four regular AAAs to re-up the middle of your longest runs. 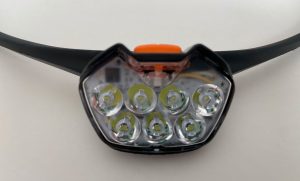 Lastly, the Iko Core makes astonishingly good use of space even when it’s not on your head. The rubberized plastic band doesn’t look flexible, but it bends and folds into a compressed figure-8 no bigger or thicker than the palm of your hand. Stuff it in the carry bag, throw it in a pocket, and forget it’s there until darkness descends again.

The Petzl Swift RL, when compared with the Iko Core, isn’t one that you’ll forget about quite so easily — for better or for worse. It’s undeniably heavier, bulkier, and more obtrusive. But what you lose in minimalism you gain in power and versatility. 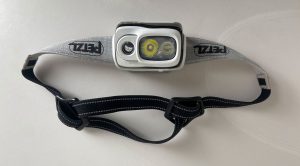 The Swift RL shines significantly brighter than the Iko Core, reaching a peak of 900 lumens at the highest setting. You can also switch between narrow and wide beams depending on what needs your attention most: your feet below or the landscape ahead.

But the most helpful feature on the Swift RL is the reactive lighting technology. No more constantly adjusting the brightness as the sun gradually sets or every time you lose sight of the moon behind a canopy of trees; this headlamp takes care of it for you. The intensity adjusts automatically to match your surroundings. And when your brain is already fried from chugging along for hours or days on end, one less thing to remember makes a bigger difference than you’d think. Just heading out for a sleepy pre-dawn jog felt less stressful knowing that all I had to do was smash a banana and hit the button once on my way out the door to be all set for the rest of the run. 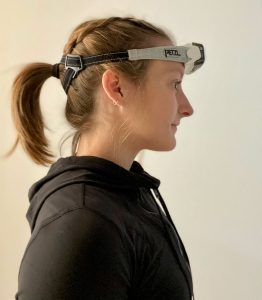 The lamp body on the Swift RL does protrude out a good inch farther than the Iko Core’s. Despite the dramatic size difference, though, the Swift actually feels more comfortable on my head. Maybe that’s because it’s closer to a traditional headlamp than the newfangled Iko, and the AIRFIT design just needs time to grow on me. But the headband on the Swift RL — lightly padded on the forehead, split on the back for weight distribution — stays put so nicely that I don’t notice the extra bulk much. 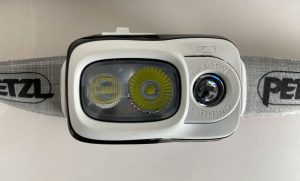 One thing that might cause an actual problem mid-run is the battery situation. The rechargeable Swift RL doesn’t offer the option of replacing the battery with a fresh one like the Iko Core. When it’s dead, you’re SOL.

Luckily it lasts for up to 100 hours in standard mode and 50 in reactive mode. As long as you monitor the battery level and top it off between runs, the risk is pretty low.

Bigger + brighter = better? In my case, maybe. When it comes to distance running, I’ll almost always pick the smallest, lightest option when given the choice. Shedding a few ounces from my load seems like a no-brainer.

But the Swift RL might just win out for how and where I run. I want the security of a brighter light while running at high altitude when my vision tends to get foggy, and during early morning training sessions when I’m running alone on the lightly-trafficked trails by my small mountain hometown.

I also know that my brain tends to slow down as soon as the sun sets, so I could use the help of a smart headlamp that can adjust its brightness for me when I undoubtedly forget how to do anything but put one foot in front of the other. I’ll likely stick to the Swift on a regular basis, then break out the Iko for the longest distances when size matters more than convenience.