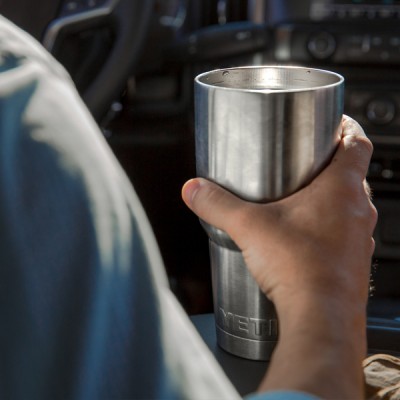 Last month, I attended the Outdoor Retailer Winter Market in Salt Lake City, Utah to report on as many new products in the industry as I could. I met up with Carl Johnson from Backbone Media who represents Big Agnes, among other brands. After running through what was new with the brand that focuses on tents, sleeping bags, sleeping pads, and outerwear, we veered conversation toward other brands he was promoting at the show.

He soon brought my attention to the travel mug he was using, which is made by YETI Coolers, another company he represents that I’ve written about in the past. As a constant coffee drinker, I immediately was interested in the product.

Since 2006, YETI has been selling coolers geared toward use in the fishing industry. The company was established by brothers Roy and Ryan Seidars, both of whom worked in the industry and were tired of having to replace coolers that were not up to their standards. They fixed problems such as poor insulation and low-quality handles and latches, and YETI Coolers was born.

Carl told me about how YETI created these tumblers with the same insulation technology and durability used to create the well-known coolers. I was fortunate enough to have one of the travel mugs, the YETI Rambler 20 (ounce), sent to me for review.

Before moving further of this YETI Cup Review, let’s take a look at the details: the tumblers are made with kitchen-grade 18/8 stainless steel and double-wall vacuum insulation. They hold ice two times longer than plastic tumblers and are made for maximum ice retention. But they’re also great for hot beverages. They are BPA free and have a clear lid that incorporates the YETI logo, which is also included on the lower portion of the stainless steel body (as seen in the photo above).

The travel mugs are described as being “over-engineered,” which is never a bad thing considering you want it to last. After all, high-quality, indestructible coolers are what the company is all about. After opening the package my YETI Rambler 20 was delivered in, it was evident the mug was sturdy, but it wasn’t especially heavy. Maybe a bit bulkier than what I was accustomed to using to transport my morning coffee to work, but not enough to really notice.

For the first test? Coffee.

On average, I drink about three cups of coffee each morning. I’ve been told by some people this is far too much, while others have informed me it’s not nearly enough. For background, I live in Michigan. It’s been a cold winter. I typically pour my coffee into a travel mug, let it cool down during the approximate 15-minute drive to work, and it’s at the perfect temperature to drink by the time I get settled at my desk. But that was in the summer. By the time I arrive at work when the ground is layered with snow and ice, my coffee tends to be cold.

I don’t really want to get on the tangent of complaining about reheated coffee. In short, it’s never good.

The YETI Rambler 20 has helped significantly. If there’s any problem remaining, it might be that my coffee is still too hot to drink when I get to work. This mug delivers when it claims to hold temperatures. I’ve taken to pouring a bit of coffee at a time from the Rambler into a traditional coffee mug, which is reminiscent of my weekend mornings when I keep refilling my mug from the coffee pot. It’s always hot.

In conclusion, as far as the coffee temperature maintaining capabilities, I was impressed.

Now onto the cold.

I’m famous for pouring a beer and then forgetting about it while I do chores around the house or write. I’ve always assumed I was a pretty great multitasker, but I suppose this is the area where I fail, which doesn’t make much sense because, c’mon, it’s beer. But hey, the YETI Rambler 20 actually helped to solve the problem.

Warm beer is one of those things I just can’t do, no matter how well-crafted the liquid inside the glass may be. As a result of my forgetfulness, I end up wasting quite a bit. I employed the YETI Rambler 20 once again, and this time I was also impressed. I poured a beer into the mug, then proceeded to clean my house, do laundry, check my email, and pay some bills online, taking sips in between each task. There was still beer in the mug after an hour, and it was still ice cold.

The only minor flaw I noted about the travel mug was the design of the lid. While I appreciated the unique design of the clear lid, the place where you sip from (does this part of the lid even have an official name? Not according to my research), is not enclosed in any way. I spilled a few times, but I will say that thought was placed on the design and function of the lid—rather than sitting parallel to the bottom of the mug, it is slightly angled so any liquid that is sitting on the lid will run back into the cup. However, I still believe some sort of closing mechanism would be helpful.

All in all, this is a great purchase. The only thing I would keep in mind is that it’s perfect for cold weather, as hot beverages take A LONG TIME to cool down when in the mug. Obviously, YETI had this in mind, as they’re marketing to those in the fishing industry. But that doesn’t mean you need to enjoy fishing to find purpose for the tumbler. It’s great for everyday use. 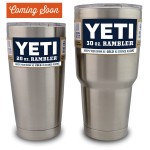 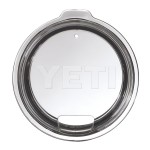 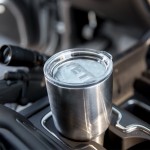