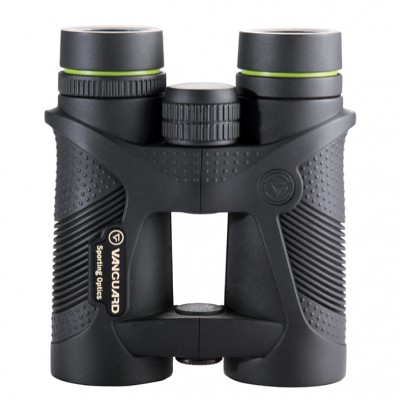 I received my pair of Vanguard Spirit XF Binoculars to review for Outdoor Hub at the height of the off-season. With three solid months between New York State’s spring turkey hunting season and the early September Canadian goose season, there was no opportunity to take them out for field trials during an actual hunting season that would put them through all the paces, but I was able to run them through the sort of off-season activities that allowed me to quickly see that the Spirit XF 1042 binoculars were well worth a place in my gear when hunting season did roll around.

The very first time that I unwrapped the Vanguards I was impressed at the clarity, quality, and steadiness of the image that I saw simply looking out my windows at the edges of the lawn and peering into the woods beyond. It was literally obvious at a glance that these binoculars gathered light and delivered a sharp, clear image. It is my experience that poorly made binoculars do NOT provide sharp clear images. The image seen through poorly made optics seems to shimmer and shake in my hands. But this was not the case with the Vanguards. At the 75-150 yard range they obviously enhanced my view whether I was looking at hummingbirds flitting through bright sunlight to their nest 50 yards away, or peering into the dim light of the forest floor under the cover of thick foliage.

After that initial few minutes of unwrapping and glancing through them, I left the Vanguards right on my window sill where they would be easy to grab in case I needed a quick look at a slinking red foxes cruising the shadows toward the backyard chicken coop or happened to have a chance to catch a deer within sight of the house that I wanted a better look at. The wide comfortable neck strap has the unexpected and admirable bonus feature of being able to quickly detach from the binoculars and snap directly onto the permanently attached carrying case strap to lengthen the strap on the carrying case for a more comfortable carry while the binoculars are safely stowed. The carrying case is an attractive black that would not be out of place at a concert or ball game where you might find optics useful but blaze orange or camo covering undesirable. Beyond the binoculars, the case itself is weather resistant is solidly built with secure stitching and has a secure Velcro closure to hold the top down while holding rain and dust OUT of your binoculars.

I have not yet tested this pair of binoculars in the rain or snow. That will come in part two of my review when I take these lightweight little beauties in the field to hunt with. Where I did test the Vanguard Spirit XF binoculars was in the summer heat. My next opportunity to use the Vanguards was a mundane trip to the shooting range. It was a blazing hot summer day in July. I was glad for the roof of the range shed where the shooting benches rested in the relative coolness of the shade from the roof and I was glad for the Vanguards, which saved me many trips back and forth in the bright sunlight over the hot sand that covered the distance to the hundred yard range. All I had to do was pick up the lightweight set of binoculars and bring the comfortable eye cups to my eyes to check the results of my shots on target. I did not even have to remove my shooting glasses because the eye cups can be adjusted down for glasses wearers as well as out for those without the burden of eye glasses. The long eye relief made the binoculars a pleasure to use and easy to focus.

Not only were they easy to focus, they stayed in focus when I put them down and picked them up multiple times and were unaffected by the thump of recoil in the shooting bench. I admit, I even inadvertently dropped them and the rubber armor completely protected them so that there was not even a mark from where they hit the ground. I truly appreciated not having to make that trek into the hot sun a dozen times to check the results of various test loads on the paper. I found that I could easily see thirty caliber (.30 inch) holes in the large portion of the light-colored target from the full hundred yards away with the ten power magnification. The 42 mm objective gathered plenty of detail-revealing light to show the hits and misses. It was only on those rare occasions when I was lucky enough to actually hit the black bulls-eye that I had trouble seeing the holes. That happens so rarely for me that I was not terribly inconvenienced by it!

Most binocular reviews that focus on the durability of the product seem to linger on water resistance with an occasional nod toward the snow and ice factor, which sometimes lead to damp lenses and worse to fog. But that day on the hot sunny range was reminiscent of hunts in the west where those of us lucky enough to dream of mule deer in arid sage country are happiest. The Vanguards had performed so admirably and remained comfortable to use in mid-eighty-degree temperatures that I decided that I would take a different path and test the durability of the Vanguards in the hot and dry conditions that so often apply on western hunts in the United States. The hot summer months of the off-season seemed custom-made for this sort of review. I would test the weather resistance when we were talking about hunting in hot weather conditions, and when the daytime temperatures soared through the nineties and approached one-hundred degrees Fahrenheit it was obvious that the lightweight open–bridge body design would be an asset carrying them through the miles of hot weather hunts. The binoculars showed no degradation in the heat. The rubber armor is designed with texture to prevent slippage in sweaty or otherwise wet hands.

In a tailgating parking lot at ninety-five degrees the binoculars showed absolutely no failures of any kind. I felt like I had not yet given them the sort of test that they needed to demonstrate the durability I expected from a company that was so thorough in preparing their products for market that the concise user manual came in fourteen languages! I shut them in the car parked in direct sunlight on black top pavement between brick buildings when I went to work and let them bake as the outside temperature touched a sweltering 100 degrees. That is about as hot as it gets here in northern New York State. The interior of the car climbed well past 110 degrees. It’s hard to say how far because that’s as hot as my car’s interior thermometer reads. As I climbed into the driver seat for a punishing ride home without air-conditioning, I reached for the compact little package of black rubber and superbly clear glass, anticipating the feel of hot melted rubber and some substance of melted plastic sticking to my car dash as my skin singed with the painful stink of second degree burns. It didn’t happen.

The Vanguard Spirits remained their lightweight compact and durable selves. There was no melting and no burning. They were warm to the touch but after realizing that I could handle them without getting burned I put the eye cups firmly against my face and was happy to discover that they did not burn me, instead the warm rubber remained soft, pliable and pleasantly comfortable to use. I took photographs of the binoculars in the sun and the topped out thermometer, but when I went to retrieve the photos while drafting this review, I found the photo card compromised and all the photos lost. I think the heat was too much for the photo chip in my little camera as it rested on the hot seat next to me while I drove home, but the Vanguards were tougher and show no signs of damage at all. I had done everything short of outright abuse to test this product under hot weather conditions and they scored nearly perfectly in every category. The only thing that keeps me from calling these the best binoculars I have ever handled is the fact that I could not consistently see holes in the black bulls-eye at 100 yards but that might be too much to expect from anything short of the sort of optics that weigh like an anchor on your neck during along hike in deer country.

If these binoculars prove as easy to carry in the field as they have been in the off-season, that is a trade-off worth making. The only thing that remains is to actually carry them on the hunt and test them through the long days of wet conditions of the autumn woods and snow-covered winters of late deer season to see if they can in fact stand up to cold and wet as well as they did to the heat of summer. I’m eager to find out and when I do I’ll post part two of my review of the Spirit XF 1042 binoculars.