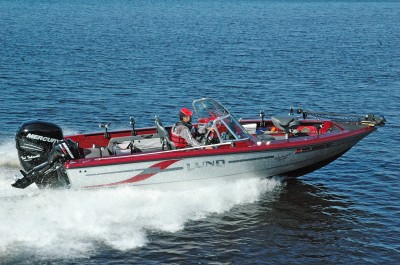 During this time of year, there’s an outdoors boat show to go to almost every weekend. With tons of new boats to drool over, the guys will kick the tires while their wives check the bank accounts to see if there’s money to buy a new one. If they already own a boat, they will ponder whether to give in to their bout of “big boat-itis” and step up in size.

Boats aren’t just a luxury item. Although they depreciate in monetary value over the years, boats often pay a great return on the investment in other ways.

Here are five great reasons to sign on the dotted line.

Jason Oakes, Marketing Director of Lund Boats, grew up in Minnesota, a state that seems to have more boats than people. He fondly remembers the 14-foot aluminum boat his dad had. The 10-horsepower motor would strain to push his family around the water in search of sunfish and crappies.

As he grew up, Oakes developed a passion for the outdoors lifestyle. All he wanted as he grew up was to own a boat along with a cabin on a lake. Today, he has both. A Lund 2010 Explorer with a 200 HP outboard powers him, his two sons and his daughter in search of fish. When they board the boat, all cell phones, Internet, and text messages are left at the dock. They spend quality time together talking and listening to one another, all while laughing, sharing good times and building priceless memories.

“Being unplugged from the digital age,” he says, “is fantastic.”

Years ago, in the days before sonar and underwater cameras, a fellow named Buck Perry spent time with his father in a boat while chasing fish. Perry had a unique quality which separated him from other anglers of the time. He was constantly analyzing why he caught fish where he did and why he didn’t catch fish in other places.

Over time, Perry pioneered theories of structure fishing, which we take for granted today. He realized that fish move in predictable pathways along changes in the bottom contours of a body of water. He noticed how fish moved from deep-water sanctuaries to feed in shallow water on points and bars before moving back down deep again. How far they moved toward shallow water on any given day depended upon factors such as water clarity and weather.

When sonar technology from World War II was adapted for use on fishing boats, Perry’s theories were confirmed and broadened. We know now that other factors affect fish location, such as the availability and type of cover, such as docks, weeds, and wood.

Today’s electronics with side-finding technology are so incredible that kids can now see various types of cover out away from the boat. Aqua Vu underwater cameras allow viewing the fish up close and personal in their own world. What more practical classroom can there be to teach young anglers how living creatures relate to their world? They can watch how fish react to different lures, live bait, and different actions. They can learn how to identify different species.

And not all the action is just below the surface. Given the opportunity to view it once, who among us hasn’t had the image of an eagle soaring above the water, diving to the surface, and grabbing a fish in its talons etched in our mind’s eye forever? A field guide to bird species can offer hours of lessons on bird identification just by driving your boat along the shoreline. No school classroom can offer that kind of practical biology lesson and the need to respect all life.

Those advanced sonar units we spoke off make it easier for us to locate fish. That’s why it’s important to teach kids the importance of taking some fish for a meal and releasing the rest. Anglers can impact fish populations if they don’t obey conservation laws and practice selective harvest.

“Even from a fishing standpoint,” says Oakes, “I like to keep a fish now and then for a meal but seldom do I have fish in the freezer. I take what I need and that’s it.”

Teaching kids the importance of supporting efforts to protect natural resources will insure we have stewards of the environment for decades to come. They can see how fishing and boat licenses contribute to state and federal natural resource agencies.

Owning a boat can be one prescription for solving one of the worst health crises facing America today. The Centers for Disease Control reports that more than one third of American adults are obese and another third is overweight. More than one-third of American children are overweight or obese. Childhood obesity has more than tripled in the past 30 years. A sedentary lifestyle contributes to both physical and mental health problems.

Having a boat available often gets us up and moving. We burn calories as we go. Today’s boat companies also offer models that can be used for more active sports, such as water skiing or tubing. If we like, the fish we catch provide a healthy meal as well.

We’ve all heard this one: a bad day on the water beats a good day at work anytime. Nothing lowers the stress level better than spending a day catching fish. Couple that with this fact:  America has been dubbed the “no vacation nation.” More than half of Americans leave vacation days unused. A boat in the driveway will give you a reason to tell the boss you’ll see him in a week. Go home, load up the family, hook up the trailer and head to the water.

Boats can bring benefits far beyond just getting on the water. But be smart about the purchase. Budget how much you can spend. Decide whether you want an aluminum hull or fiberglass. Each has its advantages. Then decide what size outboard you need. Each boat is rated for a maximum sized motor for best performance. Having the largest motor a boat can handle often helps get the best money out of the boat when and if you want to sell or trade up later.

Also, be sure to leave some money in the budget for electronics. A good sonar is critical. A unit with GPS is a good idea, especially if you plan to fish big water and visit unfamiliar places.

A boat can change your life for the better and even add years to it while improving your relationship with your kids. Isn’t that worth the price?