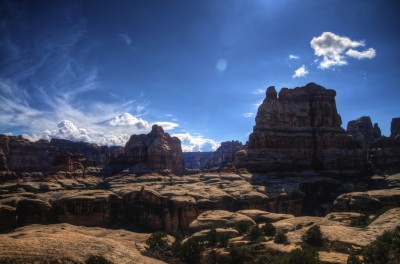 Even by the dismal standard set by many western state officials on management of public lands, Utah Gov. Gary Herbert stands out.

Earlier this year Herbert signed a clearly unconstitutional measure passed by the state legislature asserting that Utah can lay claim to 30 million acres of federal lands within the state’s borders and appropriating $3 million in scarce state funds to fight that hopeless battle in court. He has also brought a lawsuit to gain state control of 12,000 miles of “roads” that cross federal parks, monuments, wilderness areas and red rock wonderlands managed by the federal Department of Interior – many of which are nothing but cow paths and nearly invisible trails.

Herbert and others would like to see Utah seize those rights of way so they can stop the creation of any more wilderness in Utah and allow off-road vehicles to tear up protected federal lands. You can see pictures of those so-called roads here.

Those positions may appeal to some in Herbert’s far right wing constituency. But Herbert is getting some serious push back from folks he needs, and he’s discovering that demagogic Sagebrush Rebellion talk may carry a sizable economic price.

Last week, the nation’s outdoor recreation industry gave Herbert a very public beat down for his positions on public lands, and made an explicit threat to take its two annual trade shows – located in Salt Lake City since 1996 – elsewhere. The summer and winter shows – even though closed to the public and open only to outdoor industry members – bring 46,000 visitors to Utah’s capital and pump more than $42 million a year into the local economy.

That reality shouldn’t be lost on either other western politicians or the U.S. as a whole.

After a private meeting with Herbert, Frank Hugelmeyer, the president and CEO of the Outdoor Industry Association, released a scathing statement from the trade group’s board about “Utah’s unfavorable positions on public lands policy”:

These policies threaten the recreation infrastructure that is fundamental to the outdoor industry…Of greatest concern is the governor’s lawsuit challenging the federal government over jurisdiction of the federal public lands and some road claims within national parks, monuments and wilderness areas. We have not and will not sit silently on threats to the nation’s recreation infrastructure.

Herbert emerged from the meeting uttering happy talk about how OIA and the state could work together to solve the problem of not enough exhibition space for the annual trade shows.What Herbert apparently doesn’t fully understand is that trashing federally protected lands in Utah is a very real threat to the state’s economy, which relies greatly on tourism and recreation tied to those very federal lands. Outdoor recreation employs 65,000 people in Utah, generates $5.8 billion in economic activity and produces about $300 million in state tax revenues, according to the Salt Lake Tribune.

The OIA itself, in a June report, found that 6.1 million American jobs are directly supported by the industry – three times as many as are supported by oil and gas — and that Americans spend $646 billion each year on activities like camping, hunting, and snow sports.

Peter Metcalf, CEO and President of Black Diamond Equipment – a leading manufacturer of climbing, skiing and mountaineering gear that is based in Utah – was instrumental in getting OIA to take a stand against Herbert. The governor’s policies, Metcalf told the Salt Lake Tribune, “are dangerous not only for the vitality of Utah’s vibrant, active out-door recreation industry, but for tourism, biodiversity and a healthy environment for its citizens as well.”

Herbert apparently thought he could get away with feuding just with Metcalf, who wrote a newspaper column in March taking the legislature and governor to task for their “short-sighted” attacks on public lands. “These folks are killing the goose that lays the golden egg,” Metcalf wrote.

Metcalf resigned. But it wasn’t very long before he showed up with several thousand of his friends from the OIA to remind Herbert that money talks – threatening to walk to another state with leaders who understand the importance of protected public lands.

Tom Kenworthy is a Senior Fellow at the Center for American Progress Action Fund. This article was originally published on ThinkProgress.org and is republished with permission.

Image from Zach Dischner on the flickr Creative Commons