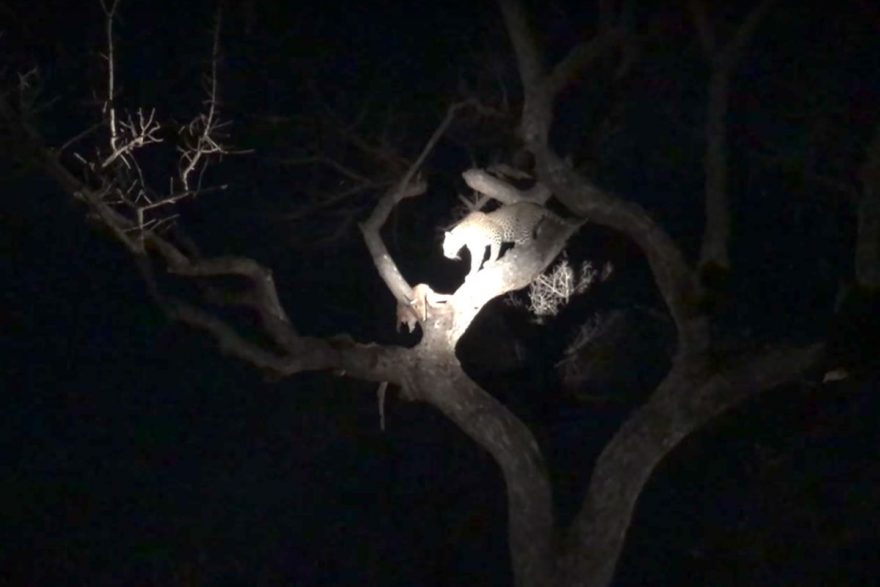 At the Sabi Sands Game Reserve in South Africa, a field guide was thrilled when they heard over the radio that a local leopard known as Tiyani had killed his prey and was dragging it up a tree. Chene Wales-Baillie then took her evening safari tour group to the area, a second female leopard also arrived at the scene, looking to share the animal’s evening meal.

In the video, you can see Wales-Baillie give a sensational play-by-play, informing the tourists what they need to look out for, and predicted some of the leopard’s actions.

The two leopards start to fight in the tree over the kill, an impala. They have an intense fight, and Tiyani, the instigating animal wounds up falling from the tree. He then runs off while the impala’s carcass falls into the lap of the hyenas. It was an extraordinary sight, and an extremely rare sighting, even for the experienced field guide.

Wales Baillie told Kruger Sightings “In almost two years of guiding; I have never seen two leopards fighting, let alone up a tree over a kill! It was amazing!”

She wrote, “I usually get very over excited when awesome sightings happen, and this was definitely one of those, but there was so much suspense!” Wales-Baillie also added “We didn’t know what was going to happen! It was very exciting to watch yet also quite shocking when all the fighting up the tree was busy happening. I kept hoping that none of our young females got too injured at the same time!

“You don’t get to see it in the video, but as the one female fell from the tree, she fell into the frenzy of hyenas below and bounced out of them then ran off before the impala kill fell to those hungry mouths!

“At the end, neither of the leopards had a meal and the leopard up the tree (Tiyani), looked a bit disappointed indeed. It was priceless to see the hyena walk away with a free meal as if it had worked so hard for it!”