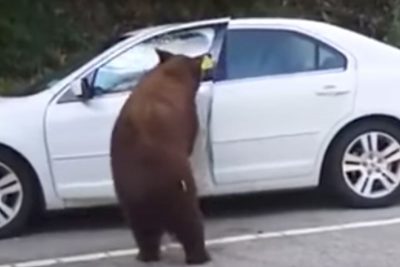 Two Rancho San Joaquin, CA residents were on their way to a hike when they were able to get incredible footage of a close encounter with a bear. The furry beast opened the door to an elderly couple’s car not once, but twice! Somehow the couple inside the car maintained their cool and were able to stay safe, snapping a couple of pictures to document this incredible occurrence.

Luckily, the camera man and his friend were able to scare the bear away with some honking, and everyone was safe, though a bit shook.

Bears are very adaptative animals, and in areas where they are in close proximity to humans, such as this area of California, they have learned “food-conditioning”, meaning that they have learned new skills in order to get access to food.

According to a wildlife officer at Yosemite National Park, one of these learned behaviors around humans in bears is the ability to operate door handles. They have also learned to access special food storage canisters to deter bears, which is why companies such as BearVault have been forced to continually update their locking mechanism.

Kristen Leong, an expert in human/animal interactions and behaviors claims that the bear’s ability to operate car doors is just the latest adaptation by bears to the behaviors and presence of humans. A recent study showed that bears are also capable of moving tree stumps and use rudimentary tools in order to reach donuts otherwise too high for them to reach.

If you are are in an area that is known to have a bear population, make sure to have your windows up and your doors locked at all times, and don’t keep any food inside your car. If you must, invest in a high-quality bear canister to store your food, to deter these animals from wanting to get inside your car.

Bears can usually be scared off by loud noises, so if you see a bear starting to approach your car, stay calm and blast your horn!