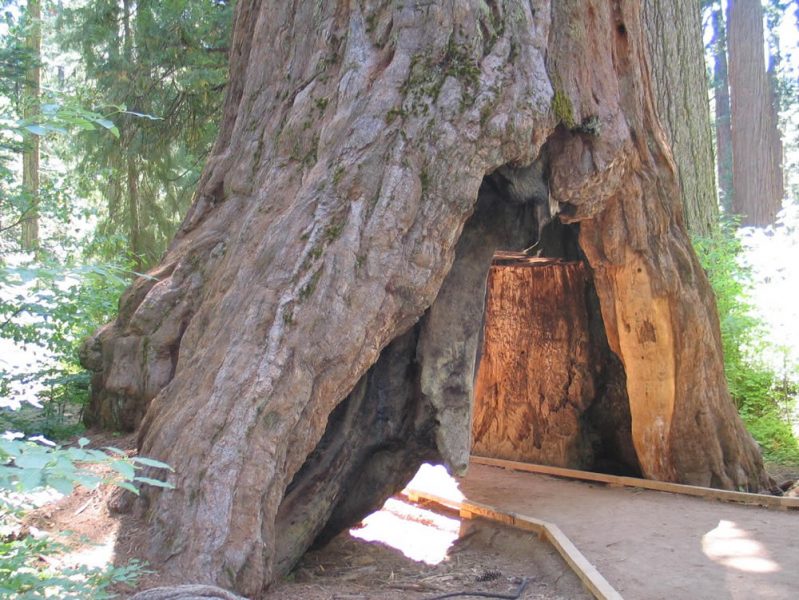 Mesmerizing visitors for almost 140 years, the Pioneer Cabin Tree is no more. The Sequoia, thought to be over 1,000 years old, was finally toppled following heavy storms in California.

The tree has been a tourist attraction since the 1880s both due to its size and the tunnel that had been carved into it. Generations of visitors have passed the tunnel either through cart, car or by foot.

“We lost an old friend today,” wrote Jim Allday, a park volunteer at the Calaveras Big Trees Association. Considering the buzz around the Facebook post that first published the sad news, thousands around the world feel the same way.

“My dad took us there when we first moved to California back in 1967,” wrote one previous visitor. “I remember when my folks piled us in the family beater station wagon and driving through it,” recalled another.

The giant sequoia is unique to California’s Sierra Nevada mountain range. Related to the redwood tree, it’s the tallest tree species on the planet, with some reaching heights of 250ft. Its impressive size has inspired visitors for generations, helping craft California’s image as the nature lover’s paradise.

Was This the Only ‘Tunnel Tree’?

Many commenters were confused upon reading about the Pioneer Cabin Tree’s demise, assuming this is the only ‘tunnel tree’ out there. However, several others can still be visited; these are all privately owned, which means that they aren’t quite as popular or well known.

The Shrine Tree, found on the Avenue of Giants, has a tunnel that was actually created by Mother Nature herself. The Chandelier Tree, in Leggett, has a wide opening that allows larger cars to get through. And finally, the Klamath Tree, an hour north of Eureka, was carved in 1976.

There are other sequoia’s that are also worth visiting. For example, the Hercules Tree in Mountain Home State Forest has steps and a room you can walk into. There is a tunnel that can be driven through in Sequoia National Park, though admittedly it’s through a fallen tree (the so-called ‘Tunnel Log’).

“The tree will most likely remain where it fell, providing habitat for many creatures and slowly decomposing to improve the soil for future sequoia’s,” writes the Calaveras Big Trees Association on its official Facebook page. While it’s sad to see this beautiful tree toppled by the storms, knowing that it will still have its part in the cycle of nature does serve as consolation.