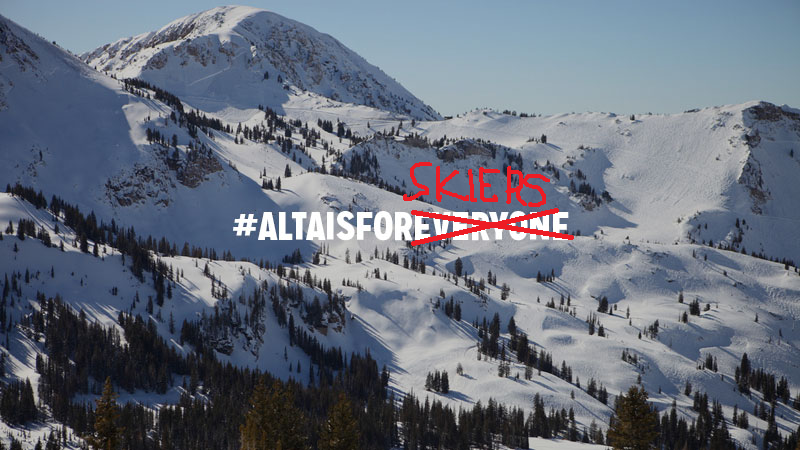 In what should not as a surprise to anybody, a Federal Appeals court upheld a lower court’s ruling to dismiss Wasatch Equality’s suit challenging Alta’s ban on snowboards.

From the beginning I thought their approach was destined to fail, but the dismissal leaves the door open for other challenges in the future.

Wasatch Equality’s suit hinged upon a strained interpretation of “equal protection” based on the fact that Alta operates their ski resort on “public” land under the purview of the United States Forest Service.

The 14th amendment which aims to ensure equal protection under the law simply is not applicable to persons seeking recreation on privately managed land.  The appellate court confirms the lower court’s rulings (as I’ve noted previously) that Alta’s ban on snowboarding simply can’t be challenged on these grounds, because:

The equal protection clause is not a general fairness law that allows everyone who feels discriminated against to bring an action in federal court.

Instead of going on the 14th Amendment tangent, they needed to challenge the USFS’s interpretation of their lease with Alta, because this is really the crux of the issue, since Alta’s position relies on its lease for protection.

The terms of Alta’s lease with the US Forest Service allow Alta to restrict “any type of skiing device that creates an unnecessary risk to other skiers”, and it is on that basis — the lease with the USFS and the determination of whether this ban is in accordance with what Alta is permitted to do by the terms of the lease — that the ban may be challenged.

If it can be demonstrated that Alta’s rationale is based on hooey (it can be!), then Alta’s ban on snowboarders may actually violate their lease with the USFS! (Note: I am not a lawyer.)

If Wasatch Equality wants a rematch with Alta, that’s the angle I’d take.

The trouble with this is that it would require the USFS’s participation, and based on the available evidence that doesn’t seem remotely likely.

But they shouldn’t, because…

Alta is for Skiers, Let’s Keep it that Way

I understand why some snowboarders want to ride Alta, but even considering that, it’s hard to understand why this was ever a lawsuit to begin with. Part of living in an arguably “free” country is accepting the fact that some people will do things that you disapprove of, and that you have really no business forcing them to do otherwise.

Sometimes, we need to just turn the other cheek.

But perhaps more importantly, Alta’s ban on snowboarding is a top-down decision that permeates their “culture”. They don’t want us there, and we shouldn’t want to be there. Even if they had to let us in, I’m sure we wouldn’t feel very welcome. Given Alta’s treatment of snowboarders over the last 40 years, it’s insane that anyone would fight for the “right” to give them money, to support Alta financially through the purchase of lift tickets, lodging, food & beverage, souvenirs, etc., when there are plenty of other mountains to ride.

If skiers want to keep Alta to themselves, let them have it.