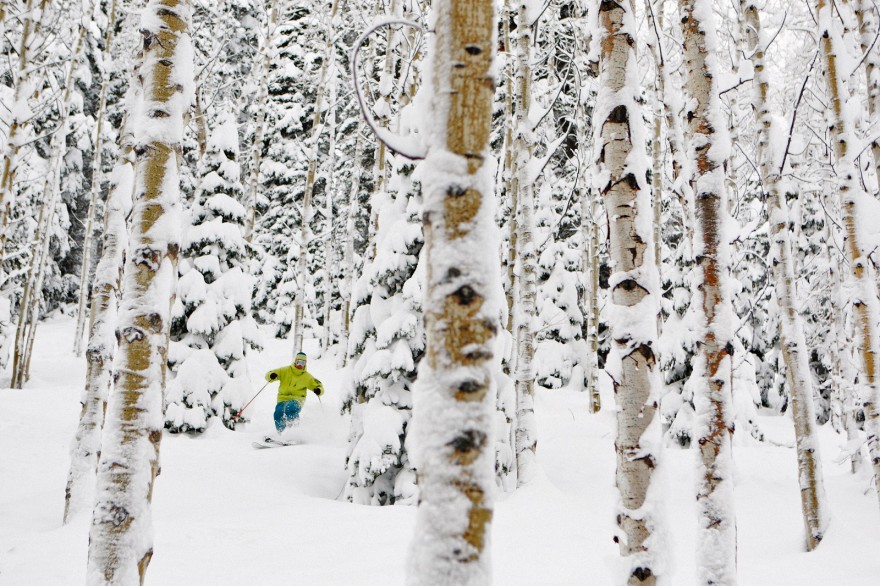 Skiers and riders will find a multitude of offerings in Utah this winter. Image courtesy of Dan Campbell/Ski Utah.

The snowy spotlight is shining on Park City this winter.

But there are plenty of other opportunities in Utah, including making some turns at smaller areas.

In case you missed it,  not only will Park City Mountain Resort with the addition of the former Canyons Resort become the largest ski resort in the country with more than 300 trails over some 7,300 acres, but the city will also serve up a host of new amenities and activities.

Averaging about 355 inches of snowfall per year, the Utah mega-resort about a half hour drive from Salt Lake City spans 17 peaks with 14 bowls while also including  sculpted terrain with two halfpipes and six terrain parks.

There are 41 lifts to shuttle skiers and riders to the slopes with the completion of a $50 million renovation linking Park City with the former Canyons Resort.

The new high speed two-way gondola, Quicksilver, will take guests from the base of the existing Silverlode Lift at Park City to the Flatiron Lift area at Canyons. There will also be an additional mid-station at the top of Pine Cone Ridge, allowing skiers and riders the opportunity to ski into Thaynes Canyon via gated ski access or to the Iron Mountain area through new trails.

Look for some new zest as well. A new 500-seat Miners Camp restaurant will replace the old Snow Hut restaurant located at the base of the Silverlode Lift and future base terminal of the Quicksilver. They’ve also done some upgrades to the Red Pine Lodge and Summit House restaurants.

White Park City is growing and tweaking, a new Utah resort is slated to open this winter, Cherry Peak in Richmond.

The Northern Utah ski area looks to harken back to the days of family ski trips. With 29 trails, the ski area is on property owned by the same family for generations. The lodge at the base was built by hand and the property is in an alcohol-free area.

Chairlifts will service the 1265 vertical feet with trails like Eazy Cheezy, Gangway and Black Hole. The longest run is 1.25 miles long and the area can accommodate more than 1,000 skiers daily on its 200-plus acres. Most of the runs are intermediate, with the rest split between advanced and beginner.   In addition to skiing and riding, tubing and ice skating will be offered.

Go ski “The Beav.” Northern Utah’s family-centric (family owned too) Beaver Mountain has been around Logan in the Bear River Mountains since the late 1930s. A few miles south of the Idaho border, the Beav’s a hot spot for Logan locals as well as Utah State University students carving down its 48 trails with a 1700 foot vertical drop.

The matriarch of the family Marge Seeholzer takes an active role in managing the area, selling tickets and taking a daily roll call on who’s around.

For those looking to venture off the beaten path, about 3 and a 1/2 hours from Salt Lake City (and Las Vegas, Nevada too) is Eagle Point in Beaver off Interstate-15. The 40-plus trail ski area with five lifts, more than 1500 vertical feet and about 450 inches of natural snow each year has seen several reincarnations since first opening in the early 1970s as Mount Holly and later renamed Elk Meadows. The current owners unveiled it as Eagle Point Resort in 2010. The Southern Utah resort has a picturesque village, well-kept groomers and access to beyond the gates to backcountry terrain in the Fishlake National Forest.

Eagle Point is also one of those ski areas that can be rented for the day (Monday through Wednesday) for a special event.
Lit at night, Eden’s affordable Nordic Valley by Ogden in the Wasatch Mountains gets thumbs up for its intermediate and advanced runs—about seventy percent of the terrain—while also easing newbies into the sport. It’s small, 22 trails, but often yield big results as it was one of the best downhill training sites for the 2002 Winter Olympics.

The mountain’s a draw for locals, first established in 1968. The resort was purchased by Wolf Creek Golf Resort in 2005, which five years later declared bankruptcy. The area was called Wolf Mountain during that tenure, but Skyline Mountain Base LLC later bought it and changed the name back to its original.