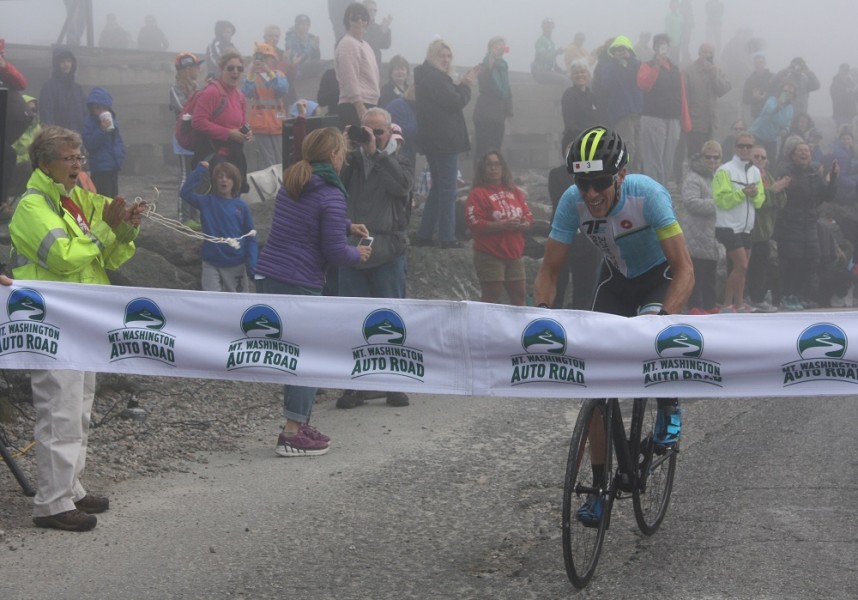 On a day that saw light winds and temperatures in the mid-50s, Eneas Freyre didn’t have to battle the weather.

“I just didn’t feel very comfortable today so as a result I was kind of fighting the bike, but it all sort of worked out which was okay,” he said wrapped in a blanket at 6,288 feet.

That is did as the 39-year-old cyclist from Norwalk, Connecticut won the 43rd Mt. Washington Auto Road Bicycle Hillclimb August 15 up the highest peak in the Northeast.

Freyre’s winning time up the 7.6-mile road in New Hampshire’s White Mountains was 53 minutes. The racer who oversees a training and retail business called Total Traning & Fitness was in the front of a small pack at the beginning of the race with temperatures in the low 70s. About three miles into it, he broke away from Eric Follen, 40, of Sandford, Maine and never looked back.

“I have been racing long enough to be opportunistic,” he said. “Sometimes you are there and you see something that looks promising and you go for it, and other times you sit back and let the race go to you. I was riding at the front and felt fine. I set into a pace behind Eric Follen a little bit. Then I just kind of went into my own rhythm. I didn’t feel very good from then on. Not comfortable, but I kept going and going. I just looked at those minutes go by.”

The higher Freyre went up the mountain, the more he hugged the yellow line in the middle on the pavement, having the whole road to himself at stretches.

“I was just staring at the yellow line and I figured I would stare at it and follow the yellow line all the way home,” he said. “So that’s why I just kept my head down and not too look around the corners because that is where you lose your focus. So, it’s always better to look down to find something in front of you to follow.”

He didn’t mind the weather though.

“The weather was great,” he said.  “I like riding in all conditions. To be honest, I do a lot of training indoors. But I’ve been riding enough time in New England that I also ride in snow. So for me it really doesn’t matter. This is nice weather which is better because there is a lot of family and friends here. You love to have them have a great time and so this makes it a lot better experience for everybody.”

Last year Freyre finished third in the Hillclimb, his first time in the race.

On the women’s side, the race was won by Veronique Fortin, 35, of Gatineau, Quebec. The 2011 Canadian national champion posted a time of one hour, five minutes and 58 seconds.

“I didn’t know what to expect,” Fortin said in a release. “I didn’t look at the profile before the race. I knew it was long and hard. I knew I was pretty out in front and I was trying to stay constant, but I lost a little power at the end. At the steepest part at the end (a wicked 22 percent grade) the crowds and the atmosphere made it easy to finish.”

The field started with about 630 riders. Some 516 finished. There were at least three families included, three tandem riders, a cyclist from Anchorage, Alaska and a unicyclist.

The oldest finisher was Dick Devellian, 78, of nearby Jackson, New Hampshire. His  time was 2:30:53. Develllian has raced the Hillclimb several times, starting in the early 1980s. He had both of his knees replaced a few years ago.

He said it was a tough day for him. At the last pitch, that nasty 22 percent, he got off to walk a few yards before remounting and pedaling across the finish line.

The important thing was he kept going.

“That’s what you always do: On the way up you swear up and down that you’re never going to do this again and then you get to the top and it all goes away,” he said.

The Hillclimb is a fundraiser for the Tin Mountain Conservation Center in Albany, New Hampshire which offers classes and programs about the natural world.