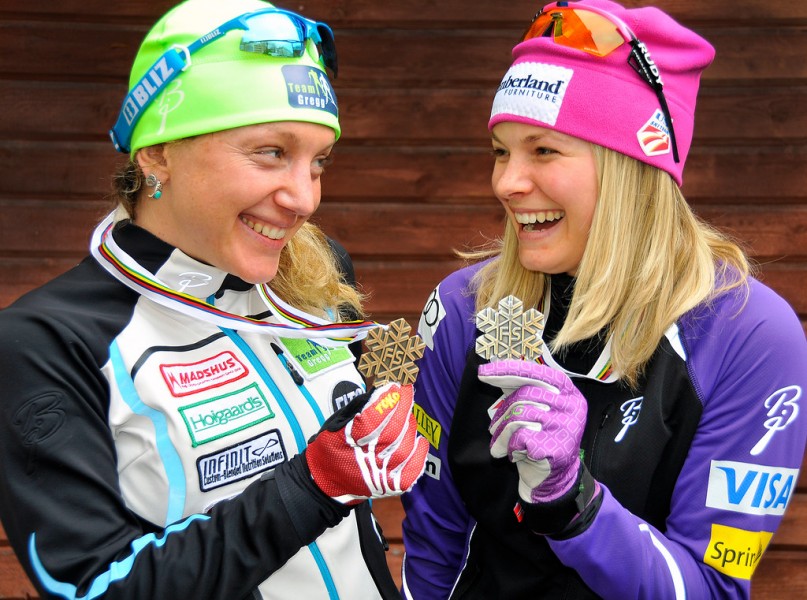 A couple of Minnesota girls put the U.S. on the podium in the best finish ever by Americans at the Nordic World Ski Championships.

“For us to have two on the podium? It’s incredible. Just incredible,” said Diggins of the February 24 race.

Both Americans took advantage of fast skis to earn the second and third place finishes. Gregg skied an even race to finish before the snows came in while Diggins started a little later and really poured it on during the final three kilometers  for her medal.

The race was among the least predictable events held this season on the World Cup circuit. Snow was forecast for start time but at the actual start, there were just tiny little flakes, which created little impact on the event. As the race went on however, the heavy snow moved in, hindering the later skiers

Of the top 20 finishers, only the winner Kalla—also the Olympic gold medalist in the 10K freestyle at Sochi—was an odds-on favorite. The U.S. took advantage of great work from their service team to capitalize on the conditions.

“It was hard to see anything and it was getting slower all the time,” said Diggins. “The climbs were getting soft. The coaches were running next to me going crazy so I knew that I was in it. I couldn’t be happier.”

Gregg said the finish was something that she’s been dreaming a bout for a long time and for it to come true is amazing.

“This was a goal of mine since before the season,” Gregg said. “But I went out today believing anything was possible and I skied like I wanted to win a medal.”

She said the energy on the team was really amazing.The team just stayed positive and took advantage of that energy.

The U.S. packed all starters into the top 15: Liz Stephen of East Montpelier, Vermont finished 10th and Kikkan Randall posted her best distance results of the season in 15th place.

Diggins and Gregg have a history that draws back Diggins’ junior days in Minnesota. “We were at training camps from when I was a junior,” Diggins explained at the event press conference. “I’ve looked up to Caitlin for a long time and that makes this so incredible.”

The medals were the highlights for the U.S.squad in the competition that wrapped up March 1.

Aspen, Colorado’s Noah Hoffman, coming back from a leg injury, led the Americans in the 15K freestyle race with a 34th place finish.

“My energy felt super consistent and I believe I skied a quality race, but I was consistently too slow,” he said. “I paced the race well.”

To close out the championships, Hoffman skied to a 31st place finish in a grueling 50K classic.

The U.S. women missed the podium in a fourth place finish in the 4x5K when Sadie Bjornsen of Winthrop, Washington took a fall during the opening leg.

“It was great to see the following three legs fight their way back up and finish in fourth, a huge success,” said Bjornsen. “We are chasing that podium every time we put our relay leg warmers on, and sometimes it works out, sometimes it doesn’t. One thing is for sure, we have the fitness to get there! And we will!”

Stephen was able to hang on to 11th place in the mass start 30K classic race, won by Norway’s Therese Johaug took an early lead for a quick breakaway and held on to defeat teammate Marit Bjoergen and Kalla.

Snow conditions played a key role in the racing with slow, transformed snow pushing racers out of the tracks.

Stephen and Brennan skied in a pack between eighth and 12th place for most of the race. Brennan finished 16th with Bjornsen coming in 20th.