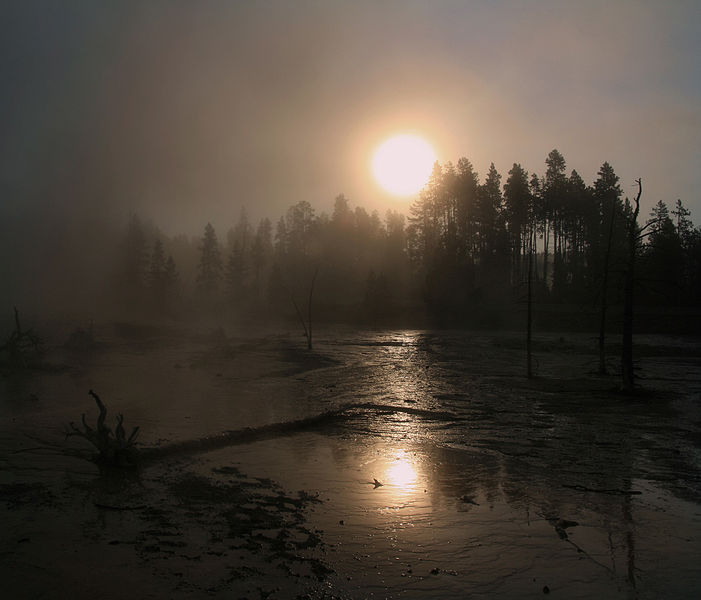 Is a picture of the Teton Range in the Rocky Mountains worth a thousand words, or a thousand likes on Instagram? What’s going to Yellowstone National Park without a Snapchat of Old Faithful?

The NPS has entered preliminary dialogues with CenturyLink, a Louisiana based multinational communications company. The line would immensely improve cellular service in the areas it covers.

In 2016, the National Park Service will turn 100 years old, and in order to stay relevant to younger generations, they know that something must give. While some visitors leave their phones off, away, and in the car, others are snapping photos with the hopes of uploading them to Facebook and other social media outlets immediately. As this becomes more and more of the norm, parks could fall behind because they lack the bandwidth to support the social media demand. The line is part of the “Go Digital” campaign released with the intention of finding ways for visitors to connect with the parks.

Yellowstone currently has a cell phone and WiFi plan, as do parks like Grand Canyon National Park, which offers WiFi during park operational hours at the park’s headquarters and other places throughout the park for a fee. Often, though, because parks can be located in fairly distant and isolated locations, cell service can be spotty, especially on busy days.

Yellowstone National Park’s Spokesman Al Nash said that on busy days in the summer near Old Faithful, chances are visitors wouldn’t be able to make or receive a call. “We have very limited cell service in parts of park where we have developments for visitors,” Nash explained. “We have very limited bandwidth data in the park, there’s not much capacity on that system.”

Nash went on to explain that the fiber-optic line would not expand cell service past the geographic locations it’s currently offered, it would only make it better where it already is located. “If this fiber optic proposal comes into fruition and is installed, it would make the existing bandwidth bigger, with more reliable cell service,” said Nash.

The campaign to “Go Digital” will be different in every park, and some think that it makes sense in heavy tourist attractions such as Yellowstone and Grand Teton. Others aren’t so keen on the idea. Public Employees for Environmental Responsibility (PEERS), the national alliance group of local state and federal resource professionals, have made it clear that they don’t stand by the decision to add the fiber-optic cable.

They created a petition against the installation, and PEER Executive Director Jeff Ruch said, “This will only help visitors avoid Yellowstone’s natural wonders by keeping their noses buried in ever-present and ever more engrossing devices.”

PEER pointed out the contrasting messages that the NPS and US Forest Service have put out recently, the NPS is attempting to find ways for younger generations to connect to the parks through technology, and the Forest Service encourages connecting with nature—sans mobile devices.

Andrew Price, an adventurer and climber who has been to several national parks, didn’t think that added cell service would change his personal experience at the parks. Price saw good and bad aspects to adding cell service in the parks, “It’s a double edged sword, you have to stay in touch, and things like Google Maps are helpful to get around, but it kind of takes away from the natural aspect of being away from how connected we are,” he said. “When you connect with nature you don’t need to connect to the interwebs,” he added.

He also didn’t think the line would be necessary. National parks have been relevant for just shy of 100 years now, will added cell service really increase business? Price didn’t think that the people who aren’t coming to national parks would be drawn to them now because of added bandwidth.

Price was also concerned with how this would affect the environment, a reasonable inquiry. Will this mean that each year five more people will accidentally drop their phones into a lake? What will the line itself do to the surrounding nature? Public Affairs Officer for Grand Teton National Park Jackie Skaggs said that once a formal application has been filed for the project, an environmental assessment must be done. The National Environmental Policy Act requires federal agencies to do these assessments. “The NEPA process requires certain steps, it requires us to analyze the impacts of a new project,” Skaggs said.

Already, phones have been addressed for causing problems in the forests, earlier this year the U.S. Forest Service issued a statement asking people to not approach wildlife in search of the perfect selfie photo. If visitors know that they can upload the photos to a social media website, will this make the problem more prevalent? Others argue that this would mean more people would spend time on their phones instead of getting a “true nature experience,” something that might be changing to mean an experience that can be captured, and then scrolled through later on.

Improved cell service won’t change the way people use their phones at national parks, Al Nash said, they will only be able to use them more effectively. Skaggs said that the project will surely take some time to come into fruition.

This does benefit safety situations, which is why the cellular plan was implemented in Yellowstone in the first place in 2009. Being able to use a phone in the case of emergency would certainly benefit visitors, as well as being able to use the park-supplied phone numbers to report nuisance and injured or sick wildlife. The ability to use the variety of nature and wildlife apps could be a benefit as well for some visitors.

CenturyLink has yet to submit a formal application for the fiber-optic line, and according to park officials and company spokeswoman Michelle Jackson in an article from the Associated Press, CenturyLink asked that the costs be mostly covered by the Park Service, and the companies that might benefit from the line if it were to be installed. So far, nothing has been agreed upon by park officials.