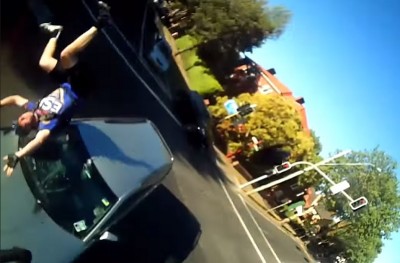 Cyclist Paul Ludlow caught his own crash on video thanks to a bike-mounted camera.

Earlier this month, Australian Paul Ludlow was taking his usual bike ride home from work when he caught an accident on tape—his own.

The Gladwell citizen had cycled the route many times before, but on this particular day, as he rode through a green light, a car coming toward him did not brake. The result was a terrifying collision, all caught on film thanks to the Fly6 camera Ludlow had mounted on his seat.

The video begins with a serene view of the street behind the bicycle, when suddenly the camera flips upside down and you hear the crunch of metal colliding. Though it happens quickly, you can actually see Ludlow’s body slam into the windshield of the car and roll limply to the ground.

“He had a green light, I had a green light. We were both coming towards each other but he should have given way to me coming through the lights but for whatever reason he didn’t see me,” Ludlow told The Sydney Morning Herald.

Fortunately for Ludlow, because the crash was recorded, police were able to identify the motorist as the guilty party. “Without this video evidence and photos, it was highly likely that the actual thing was going against me rather than the driver,” Ludlow explained further.

But the 30-second clip has sparked quite a debate on Ludlow’s YouTube channel. Though most commenters sympathize with the cyclist, some even sharing similar situations, others have been surprisingly negative. One commenter even said, “And were you going too fast? did you look carefully before entering the intersection? Get cyclists off our roads, or make them pay registration like everyone else.”

As for the injured party, Ludlow was lucky. He was rushed to Royal North Shore Hospital where he was immediately treated for glass injuries in his shoulder, and soft tissue damage to his leg. But the incident has not deterred him from riding his bike. Though the bike in the video was badly damaged, Ludlow told reporters that he plans to return to cycling once he has healed and finds a replacement.

Watch the video below: