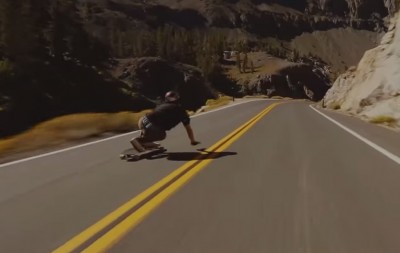 James Kelly proves that even the pros fall down---you just have to get back up.

James Kelly is no skateboarding rookie. The professional speed skateboarder spent most of his adolescence riding downhill tracks in California. As he got older, his mastery of downhill skateboarding made him a well-known name in the industry.

Recently, Kelly teamed up with Arbor Skateboards to promote his new downhill skateboard model, to be released this fall. But, while filming some amazing footage for the promo on a highway in Eastern Sierra, Kelly proved that even experts fall down sometimes.

Though the recently-released video could have cut the wipeout, Arbor Skateboards decided instead to incorporate the footage in order to create a much stronger message of determination and courage.

The wipeout itself can be viewed around the 2:25 mark, but the rest of the video is worth watching too. Kelly demonstrates his crazy skateboarding skills while the videographer captures the beauty of the landscape around him.

Luckily, even though he was going about 60 MPH, Kelly was wearing a helmet and other protective gear that prevented him from sustaining any serious injuries. The wipeout is brutal though, with Kelly wobbling and then speed sliding down the hill on his stomach. Spoiler alert, if you don’t like blood, you might want to skip ahead to around 2:40.

Amazingly, the spill doesn’t keep Kelly off the board for very long. Before you know it, he’s once again barreling down steeper hills, showing ultimate perseverance. “It was a crazy shoot but it delivered a video to remember,” Kelly wrote on his Facebook page.

Watch Kelly “Burn it Down” below: