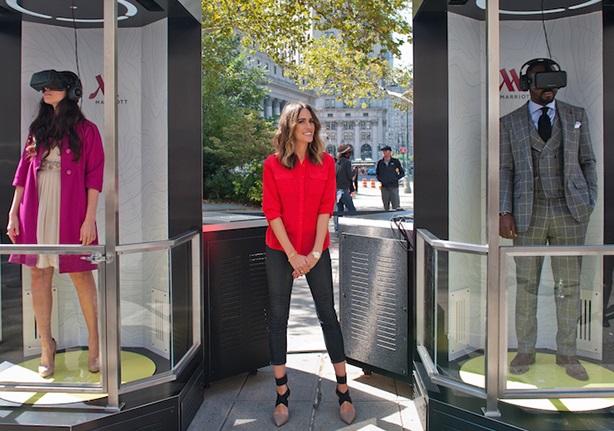 The Teleporter incorporates temperature changes, mist, and scents into the virtual travel experience.

The Teleporter is similar in style to a telephone booth, and with the assistance of an Oculus Rift headset, transports users to places in the world they may otherwise never be able to visit in person.

The booth even features sensory elements such as temperature adjustments, wind, mist, and an array of scents that make users feel even more enveloped by the virtual environments they’re visiting. According to Wired, the Teleporter was developed by visual effects firm Framestore, which won Best Visual Effects at the Oscars this year for Gravity.

The initial concept came from the goal to inspire travel rather than replace it, Marriott’s marketing vice president, Michael Dail told The Verge. “People have such a love for travel, there’s really no replacing that cultural experience of being in the space, meeting the people, experiencing the food,” he said. “The technology may improve to the point someday where it can totally surpass that real experience.”

In order to appeal to a younger audience, Marriott rolled out the Teleporter along with a number of other projects under the 2013 Travel Brilliantly campaign. The company wanted to promote itself as being tech savvy, so it worked with MIT’s Mobile Experience Lab to remodel current areas of the hotel into social hubs. The virtual travel experience grew from there.

“The tech has been there for a while, the application has been there, but now that it’s becoming accessible and mainstream, we wanted to be the first to jump out there,” Dail said. “We wanted something more immersive, more experiential, that helps people connect with that feeling of what travel’s really about.”

The Teleporter is currently in the midst of a demo tour that is traveling to New York, Boston, D.C., Atlanta, Dallas, San Diego, San Jose, and San Francisco.

Check out the video below for a behind-the-scenes look: