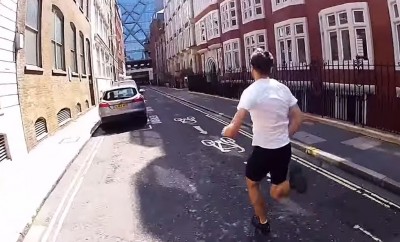 In the ‘Race the Tube’ video series, two extreme athletes challenge themselves to beat the underground in record time.

As convenient as some public transportation may be, it can also be a hassle. Having to squeeze into small, overpopulated rail cars and press up against strangers isn’t everyone’s cup of tea, which is why English rugby player James Heptonstall and his friend, conditioning coach Noel Carroll decided to make a case for running.

In a two-part video shot earlier this summer, both athletes take turns attempting to outrun the London Tube’s Circle Line.

Heptonstall’s attempt is a 90-second sprint from Manson House to Cannon Street. Impressively, as soon as the tube doors open, he bounds out of the car, up the stairs and into the street, wasting little time maneuvering his way through the crowds. When he reaches the station he hurls himself back down into the dingy tunnel leading to the platform, making it just in time to jump onto the train before the doors shut.

Carroll, on the other hand, decided to run an endurance route. Unlike Heptonstall’s sprint, Carroll ran more than three miles and passed 11 other station stops. Along the way, he filmed his historic surroundings, including glimpses of St. Paul’s Cathedral and Hyde Park.

Unlike Heptonstall, Carroll makes it to the St. James Park platform with time to spare, arriving a little over a minute before the train pulled into the station.

Of course, the whole thing is filmed by a head-mounted GoPro, as well as by a second cameraman. With the recent success of both  #racethetube challenge video, it has us wondering what this crazy duo will attempt next.

Check out the “Race the Tube” videos below: