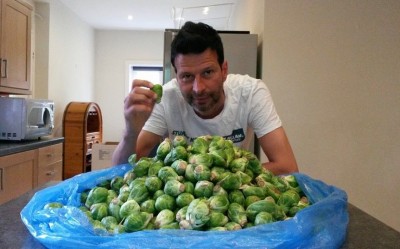 Raising money for charity commonly goes hand-in-hand with extreme sports. Athletes routinely push themselves to run marathons, tackle triathlons, or climb mountains for causes they care about. Though many of these athletes believe that as long as the feat raises money and awareness, it is successful, no athlete has pushed the boundaries of that ideal like Stuart Kettell.

The self-proclaimed “mad fool” has partnered with Macmillan Cancer Support for the last nine years. But instead of the usual challenges, Kettell has strayed from the norm, coming up with ideas that are a bit more unconventional, to say the least. “I quickly learned that the wackier the challenge, the more money and awareness if raised for Macmillan,” Kettell said. “So they get madder each year.”

Imagine, for example, spending a week living in a tiny box suspended in the air by a 25-ton crane. Completed in 2010, this was just one of Kettell’s wacky fundraising ideas. “That was my favorite so far,” he recounted. “It just caught the imagination of everyone and they all helped me get through the week by paying me visits with food and lots of random objects placed in the bucket to keep me entertained.”

“I first got involved with Macmillan as a cameraman,” Kettell continued. “I filmed case studies about patients and how Macmillan helped them and I was just so motivated to give something back and wanted to help, so I started my wacky fundraising. Since then, they have helped a close friend, and I have also heard many patient stories. That’s what keeps me motivated.”

His adventures, which have raised more than £40,000 ($67,246), have taken him across the country on a penny farthing, challenged him to run seven marathons in seven days on a giant human hamster wheel, had him walk every street of Coventry, England (his hometown) on a pair of stilts, and left him suspended by helium balloons for a week. And that’s just to name a few. “Some of the ideas, I have to admit, come from having a few glasses of wine and then I start thinking of crazy things. Then I tell people I’m going to do it, and before I know it, I’ve roped myself into completing it.”

Kettell’s latest challenge may have been been one of his craziest yet. Over the course of four days, he decided to make the journey 3,560 feet up Mount Snowdon, the highest mountain in Wales, while pushing a brussels sprout with his nose. “The Snowdon challenge was started by my brother,” Kettell explained. “After seeing a few challenges, he said ‘You will be pushing a pea up Snowdon next.’ And that was it. I just couldn’t get the idea out of my head. It didn’t work with a pea though, so we tried a sprout.”

Last week, he and his cameraman, Richard Crump started the ascent, with Crump filming the whole journey. Kettell crawled on his hands and knees for four days, pushing sprouts the entire time. The feat employed the service of 22 sprouts, and required Kettell to wear special protective gear, including a mask to protect his nose. “The worst part was my knees hurting,” he said. “By the end of the four days, I had no skin left.” Despite the injuries, and battling 40 MPH winds, Kettell eventually completed his challenge and surpassed his fundraising goal of £5,000. That, after all, is the driving force behind his madness. “I wouldn’t say I’m an athlete by any means,” he explained. “But the adrenaline keeps me going and the cancer stories motivate me to finish the challenge.”

In case you were worried that he’s is done stunning us, Kettell assured me this is just the beginning. “Next year is still being discussed,” he said excitedly. “I have several more ideas, which will be madder than the sprout!”

Learn more about his wacky adventures on his website, and find out how you can donate to MacMillan Cancer Support.