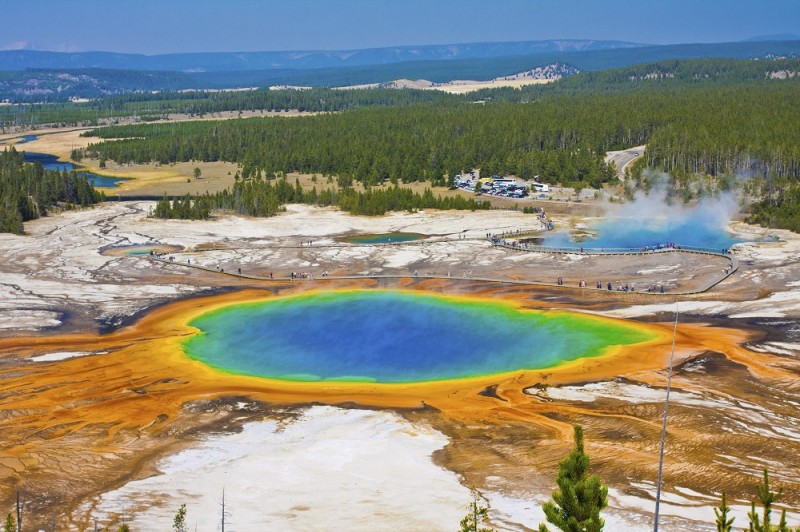 It is safe to say that drones are beginning to pop up everywhere, and not always with great results. Last Saturday, a tourist crashed one into Yellowstone’s Grand Prismatic Spring, potentially causing irreversible damage to one of the nation’s most stunning natural wonders.

As the largest hot spring in the United States, and the third largest in the world, the Grand Prismatic Spring has long been one of the park’s main attractions. Visitors are drawn to the landmark not only because of its vastness, but also its striking rainbow-colored water created by a specific mix of minerals and bacteria.

The worry is that the drone, which sunk to the bottom of the 121-foot-deep pool, will disturb the delicate ecosystem. There is also fear that it will block the spring’s water flow, which rises up from the ground. “What we have to determine is whether the presence of this radio-controlled recreational aircraft poses a threat to that unique resource,” park spokesman Al Nash told Reuters.

Once they discover what damage has already been done, officials will then have to figure out how to remove the object without creating further disruption.

The drowned drone is just another example of a growing number of problems the unmanned vehicles have caused since their popularity began to rise. In fact, after a series of disruptions in April at the Grand Canyon and Zion National Park, the National Park Service announced a nationwide ban of the technology on all 84 million acres they manage. “Drones can be extremely noisy, and can impact the natural soundscape. Drones can also impact the wilderness experience for other visitors creating an environment that is not conducive to wilderness travel,” Yosemite Park officials explained at the time of the ban.

Unfortunately, many tourists have chosen to ignore the rule, as is evidenced by the recent spring incident. Earlier this summer Grand Teton National Park reported multiple sightings of the radio-controlled aircraft. Yellowstone itself had just recently dealt with a crashed drone at the Yellowstone Lake marina.”The technology certainly has been around for a while, but this is the year that the problem has seemed to come to light for us,” Yellowstone spokeswoman Amy Bartlett told CNN.

In this case, Bartlett believes the park worker who was originally alerted to the problem did not realize the severity of the situation. Yellowstone is seeking out more information, and hopes to get more details about the device before attempting to retrieve it.