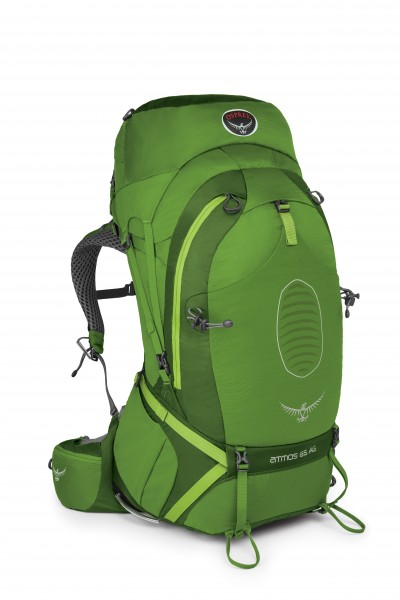 To celebrate its 40th anniversary, Osprey is releasing a number of new accessories as well as updated and brand new packs. The most unique of which is the fourth generation of the Atmos AG (anti-gravity) and Aura AG pack series for men and women, respectively—with the original idea coming from Osprey’s owner and founder, Mike Pfotenhauer.

“When Mike began designing the Atmos AG, his vision was to create [a pack] that was entirely seamless,” said Gareth Martins, Osprey’s Director of Marketing, during Outdoor Retailer Summer Market. “When you put this pack on, it wants to wrap around you before you even connect the hipbelt. There’s a great deal of customization.”

In the creation process, the goal was to address the three most important factors for backpackers—comfort, load carry, and ventilation.

When Pfotenhauer finally got outside with the Atmos AG during a hiking trip, he said he was hopping over streams in rough terrain—movements that would normally cause someone to readjust their pack because of discomfort. But he finally realized he had completely forgotten about the pack for the majority of his hike. It feels like you’re not even wearing a one, Martins said.

The packs are available in capacities of 50 and 65 liters, which retail for $230 and $260. They will be available in spring 2015. “We’re feeling pretty excited about these packs,” Martins continued.

Components of the AG system:

Osprey is also expanding its Stratos and Sirrus series of ventilated packs for men and women with the addition of a 50-liter size. The pack will retail for $180 for both men and women.

Also new in the brand is a wide selection of packs for children. While plenty of kids are growing up in outdoor-loving families, there really aren’t a ton of options for them when it comes to rugged packs. Osprey is hoping to fill that void.

The packs range from ones small enough that they look more suited for dolls, to ones large enough to fit adults. Although some seem to be more reminiscent of adult-sized packs, they’re made to fit those between ages eight through 17.

“A lot of [outdoor programs] for kids require them to have pretty large packs,” Martins said, noting that the biggest children’s pack is a whopping 75 liters. But it’s the adjustable back strap and waistband that make it work, he explained.

In addition to the new packs, only some of which were listed above, Osprey has expanded its accessories line with pack organization and protection products. From dry sacks to roll-top organizers, they’ve attempted to provide a full solution for buyers.