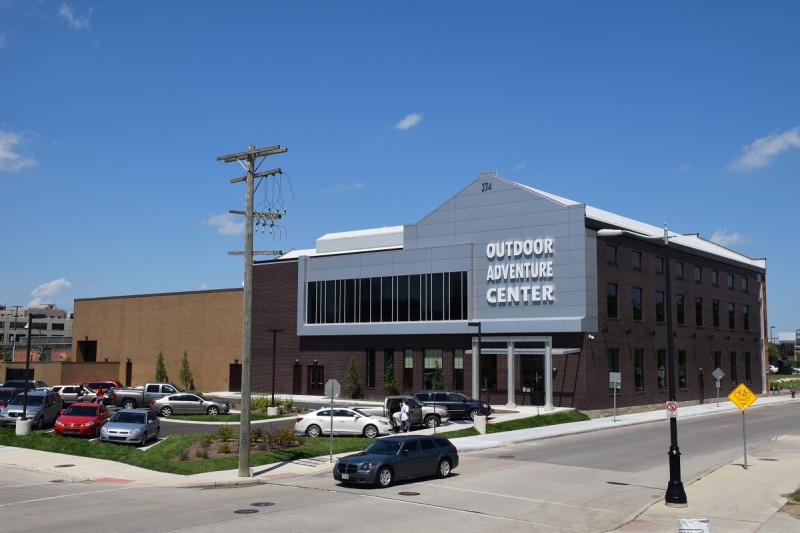 The Detroit Outdoor Adventure Center (OAC), slated to open early 2015, is going to be a center for all ages to experience and learn more about the outdoors.

“Hopefully it will create confident users of the beautiful outdoors Michigan has,” says Director Linda Walter.

Located at the intersection of Atwater Street and the Dequindre Cut trail, the OAC used to be a steam engine factory, and soon all 43,000 square feet of the building will be transformed to an educational and environmental resource for the state of Michigan.

The interior construction has been funded by public-private partnership as well as fundraising that is still in process, as the building is still under construction.

Once finished, visitors will be greeted with a waterfall when they first walk in, and further into the three-story building will be an airplane, an archery range, and several exhibits.

The displays will be mostly hands-on, featuring simulated campgrounds and fisheries as well as examples of the many habitats that Michigan has, including wetlands and beaches. It will be extremely educational but also enjoyable for those who aren’t necessarily going to the center with the intention of learning, anyone that wanders in will be able to occupy themselves for a good amount of time. The center will be open from morning to night, and Walter wants it to be filled the entire time.

Walter hopes that the OAC will serve as a springboard for those who haven’t camped or hiked before, this can be their first point of reference.

“You can’t go camping if you don’t know how, this gives everyone a little taste of things you can do,” Walter says.

The programs and activities in the center will not only prepare those who may have never gone camping or hiking, but also give them ideas and resources of where to go.

Michigan has 102 state parks, and the center will direct visitors to the nearest and farthest locations, encouraging people to get outside more and experience the natural resources that are abundant in the state.

Kids don’t play outside as much as they used to according to Walter. “We call it a nature deficiency,” she says. Walter wants the OAC to be a way to get people excited about going outdoors, and show them the opportunities to do so.

“When you go outside your whole attitude changes,” she says.

While the center may initially appeal to kids, Walter assures that there is something to enjoy for every age group, and something that will bring visitors back again.

Already the surrounding neighborhood has expressed interest, people are constantly looking in the windows and asking questions about when it will be open, and what they can do there.

It will be directly beneficial for families in the city of Detroit and in surrounding metropolitan areas, where there are fewer opportunities to experience the outdoors than there are in other places in Michigan. It will also be an attraction for anyone passing through the area, and definitely something to return to with its abundance of space and activities.

What’s offered will continue to expand though. Eventually Walter would like to grow the programming side of the center, possibly offering overnight camping trips up to Isle Royale or Tahquamenon Falls, taking visitors to Belle Isle, archery competitions, and generally serving as a park tour guide for the state of Michigan.

Seasoned campers and hikers will be able to benefit from the center, too. The educational resources that will be provided touch on all the ecosystems Michigan has, and the center hopes to grow with its audience and continue to provide innovative programs that bring people back.

The OAC will also appeal to homeschooled children, Boy Scout troops, and could be a field trip for a class. Families will be able to become members, comparable to the Michigan Science Center.

It will also be a place for career development.

“Environmental stewardship is a rewarding field,” says Walter. The education and resources provided will help to recruit and teach young people, showing them opportunities for careers in natural resources.

The people working to make the building into what it will be and the curious members of the community seem excited and proud to have a state of the art facility that has never been done before.

The OAC is the first of its kind, planting itself in the heart of a growing community and providing education, exploration, and according to Walter, enhancing family life.