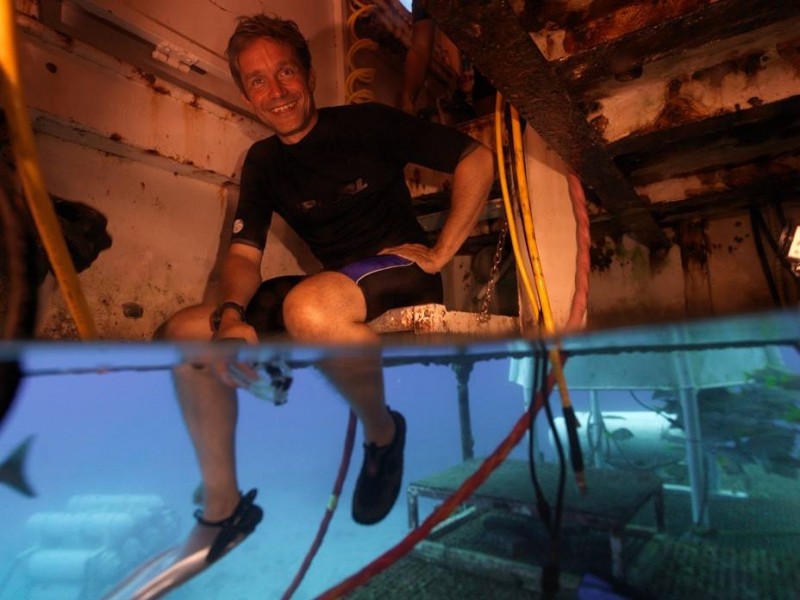 Fabien Cousteau will attempt to live underwater for 31 days off the coast of the Florida Keys.

Just like his grandfather, Cousteau has always been fascinated by the unseen world underwater. Jacques Cousteau’s documentary World Without Sun, filmed in 1963, did much to reveal the mysterious underwater world to the masses. Cousteau’s 2014 exploration will be even more daring by attempting to live a full 31 days in a laboratory 60 feet underwater off the coast of the Florida Keys; going longer and deeper underwater than his grandfather’s original attempt.

“I imagine we’ll want to stay down once we get comfy down there,” Cousteau told the Associated Press. “We won’t want to come back up to the surface because it’s such a magical place.”

Along with a five-person crew, Cousteau plans to collect data that will provide insight into three main topics: climate change and the related challenges of ocean acidification; ocean pollution emphasizing the effects of plastics; and overconsumption of resources, focusing on the decline of biodiversity. “Mission 31” also hopes to raise funds for the Aquarius Reef Base owned and operated by Florida International University. Unlike anything else of its kind, the research facility allows divers to remain underwater for an extended time without needing to return to the surface to decompress. Though it has previously been to train astronauts for space, the school-bus-sized facility will be home to Cousteau and his fellow researchers for the entire month of June.

The wonders of modern technology will help Cousteau share his entire trip with the world in real time, a luxury his grandfather was without in 1963. Cousteau plans on posting to Facebook, Twitter, and Instagram, and stream live video to give the entire world insight into the underwater world he holds so dear. “For the first time I’m able to invite the world on a Cousteau expedition in real time,” Cousteau explained excitedly.

His fellow researcher Andy Shantz is also excited to raise awareness about the important issues they will be researching, mainly climate change and pollution. “These are really important issues and to be able to bring that out and get a bit of a spotlight on the research and the science behind it is awesome,” Shantz said.

To watch the expedition unfold, visit the website and watch the live stream.