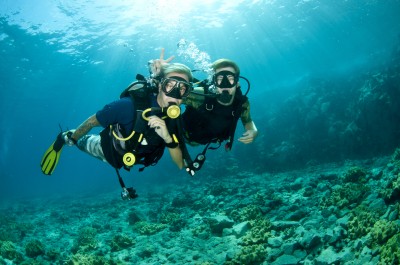 Rene Umberger was scuba diving off Hawaii's Kona Coast when she was attacked.

While scuba diving off Hawaii’s Kona Coast on Thursday, environmentalist Rene Umberger was attacked by another diver over a conflict regarding collecting reef fish. She was with a group of divers documenting coral reef damage when she was attacked by one of two divers who approached that were not with the group, assumed to be reef fish collectors.

Umberger said she and her group came upon the two divers, and it was evident they didn’t want to be bothered, let alone filmed. One of the other divers ripped off Umberger’s breathing regulator, leaving her without air. This can be extremely dangerous because when air supply is unexpectedly halted, the diver can easily go into a state of shock, forgetting how to properly surface. According to the local police station, the incident occurred 50 feet underwater and was recorded by two underwater cameras the group had with them to film the reef environment.

“This man needs to be arrested immediately for attempted murder,” 53-year-old Umberger told the station, according to CBS. After she was able to secure her regulator and breathe again, the attacker continued to make threatening gestures toward her. “I honestly thought he was coming back for a second attack. I got up on the boat and I said, ‘Oh my God, someone just tried to kill me underwater.'”

She said she credits her more than 10,000 dives as the reason she was able to handle the situation effectively. “An inexperienced diver would likely panic. Either panic from the stress of the situation and shoot for the surface. They may panic because their air source is missing and they can’t find it. Any of those things causes a diver to shoot for the surface and those incidents often lead to death,” she said, according to Hawaii News Now. “Never in a million years did I think that someone would attack like that, especially from such a distance. It’s not like we were close up or in their face.”

Although the situation was extreme, Umberger said she knows who the other diver was and wants to press charges. Currently, The State Division of Conservation and Resources Enforcement is investigating the incident and will pass any information gathered along to the county prosecutor’s office.

It is unknown at the time whether or not the two divers were collecting reef fish legally, which can be done with a permit in designated areas. There are additional rules about fish size, season, and the number that can be taken. “The greater issue is that Hawaii’s reefs are being emptied by these commercial operations,” Umberger told HNN. “Hawaii’s reefs are suffering incredibly from this unlimited collection.”

Check out the video of the attack below: