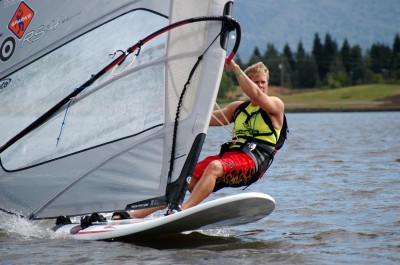 The American Windsurfing Tour is set to begin in Santa Cruz, California on June 5.

The schedule for the 2014 American Windsurfing Tour has been announced, kicking off in Santa Cruz, California on June 5. From there, the tour will travel to Oregon, Peru, Mexico, North Carolina, and Hawaii, ending on November 11. With the first weekend of the tour scheduled specifically to align with the prime sailing season in the region, the premiere event will be held at Waddell Creek.

The second stop on the tour is at Oregon’s Pistol River for the Pistol River Wave Bash, planned in accordance with the time when the area’s spring swells have stuck around, coupled with the ideal wind conditions provided by the beginning of the summer season. After the success of the 2012/2013 Pacasmayo Classic in Peru, the AWT added it this year, including South America in the tour. The next leg has athletes heading to Mexico’s Baja Peninsula, planned at a time to coincide with a south swell from the other hemisphere. North Carolina’s Hatteras Wave Jam is next on the tour, held at the peak of the fall sailing season on the East Coast. Lastly, the tour visits the windsurfing mecca of Ho’okipa Beach Park in Maui.

Divisions include Professional, Amateur, Women, Youth (18-) and Masters (45+), with a sub-division of Masters, Grand Masters (55+). “Participants best four placings in the 2014 American Windsurfing Tour will count in the final tally for overall winners. Points will be awarded in each event with the winner scoring maximum points,” the AWT website states. “Winners will be awarded at each individual event and the overall  tour champions will be announced at the ceremony following the tour finale in Maui.”

Image from Bryanmcdonald on Wikimedia Commons