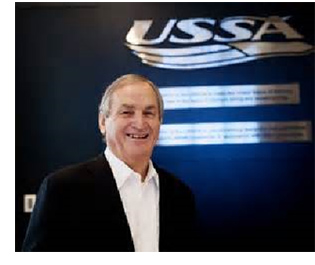 Former USSA President and CEO honored for 50 years of contributions as a snow sports athlete, coach and leader.

Today SnowSports Industries America (SIA) presented the Snow Sports Recognition Awardto Bill Marolt who is well known throughout the industry for his contributions to the U.S. Ski and Snowboard Association (USSA). The Snow Sports Recognition Award acknowledges dedication to the snow sports industry, willingness to support and partner with industry suppliers, leadership and creativity within the industry.

“Bill’s perseverance towards a vision has uplifted the entire industry through the success of great snow sports athletes,” saidDavid Ingemie, SIA president. “He saw the U.S.’s potential to become the best in the world and met that goal by focusing on athletics and cultivating valuable partnerships with suppliers and resorts.”

Since he became CEO of USSA in 1996, Marolt’s vision was to make the United States “Best in the World” in Olympic skiing and snowboarding. During his tenure in the ‘80s and since 1996, the USA won 70 of its 95 Winter Olympic medals since Winter Games began in 1924. At the 2010 Vancouver Olympics, the U.S. Ski Team was the best in the world. The team won 17 medals in Sochi, including a record eight gold. In recent years superstars like Bode Miller, Lindsey Vonn, Ted Ligety, Mikaela Shriffin, Hannah Kearney and Kikkan Randall have achieved global fame. Snowboarders like Shaun White,Kelly Clark and Gretchen Bleiler have made history. In Sochi, new stars like Sage Kotsenburg and Kaitlyn Farrington soared to the top as did freeskiers like David Wise, Maddie Bowman and Joss Christensen, who led a Team USA slopestyle sweep.

Marolt, who retired after the 2014 Winter Olympics in Sochi, left infrastructure legacies like the USSA Center of Excellence in Park City and the U.S. Ski Team Speed Center at Copper Mountain. A member of the U.S. Ski and Snowboard Hall of Fame, Marolt remains active in the International Ski Federation and the U.S. Olympic Committee. He was elected by his peers to the USOC Board of Directors in 2012 as a representative of National Governing Bodies, where he continues to serve.

“The Best in the World success U.S. skiers and snowboarders have achieved is a testament to our entire industry coming together as a team to provide the support our athletes needed to reach their goals,” said Marolt. “I’m proud to receive the SIA Snow Sports Recognition Award, but even prouder to have worked hand-in-hand with innovative suppliers who have played vital roles in our mutual success.”

That partnership was evident in the recent growth of freeskiing, where SIA joined the USSA in global lobbying efforts to bring the new events into the 2014 Olympics.

In addition to leading the USSA, Marolt has also been an Olympian, a coach and alpine director of the U.S. Ski Team. Marolt grew up ski racing in Aspen, Colo., went on to win three U.S. championships, compete in the Olympics and, after retiring as an athlete in 1968, coached ski racing in Colorado. For more than 10 years before he became the CEO of USSA, he was the athletic director at Colorado University where he helped the Buffaloes become national champions.

“The international success American ski and snowboard athletes have enjoyed during Bill’s career as a coach and USSA leader has generated consumer interest and excitement for snow sports that our industry couldn’t do without,” said Bob Gundram, SIAboard chair and president of C3.

In addition to the Snow Sports Recognition Award, SIA also recognizes specialty retailers, sales reps and industry suppliers in the United States and Canada who have had a significant impact on the growth of the snow sports industry with the SIA SnowSports Regional Rep and Retailer of the Year Awards.