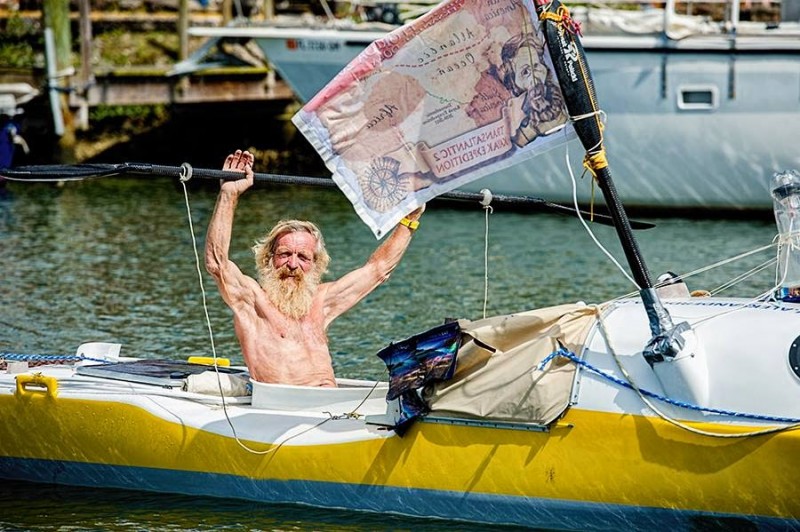 On Saturday, Aleksander ‘Olek’ Doba arrived on Florida’s New Smyrna Beach after spending more than six months in a sea kayak traveling across the Atlantic Ocean. The route he paddled spanned more than 6,000 miles, which is quite an impressive feat when you consider Doba is 67.

Described as looking like a castaway with his tanned skin and long beard, the Polish kayaker was welcomed into the marina by hundreds of supporting fans. “The feeling I had when I (arrived) here in New Smyrna Beach was fantastic, so many people, so friendly,” he said, according to the Daily Mail.

The journey began in Lisbon, Portugal on October 5, but was halted in Bermuda when Doba had to take a break (February 13 to March 23) while his kayak’s damaged rudder was being repaired. He also said he had equipment issues that made it impossible to send messages for 47 days before reaching Bermuda.

Although no official record has been announced, it is assumed his adventure was the longest open-water kayak crossing that has ever been completed. But this isn’t the first challenge of its kind Doba has succeeded at. In February 2011, he completed a paddle across the Atlantic Ocean from Senegal to Brazil that spanned 3,900 miles. That trip took him 99 days.

As for the most challenging part of his recent trip, he named the harsh waters of the Gulf Stream, which he was paddling in several days before reaching his final destination.