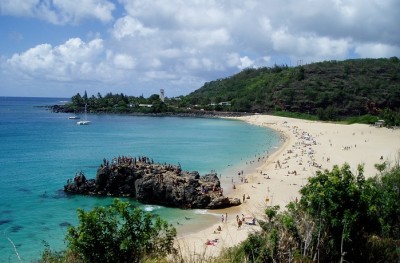 A 61-year-old surfer from Hawaii developed an eye condition called pterygium, which is when a band of fibrous tissue begins growing over the outer layers of the eye. The problem was not only irritating, but began to harm his vision. The condition is common in those who spend a great amount of time outside in warm climates, typically in the water, and has taken on the nickname “surfer’s eye.”

When it becomes severe enough, doctors can perform surgery to remove it. But this seasoned surfer had his own idea before agreeing to surgery.

While surfing a 30-foot wave at Waimea Bay off the North Shore of Oahu, he put his face in the rushing water.

“He momentarily dipped his face into the water while travelling at top speed, but was able to recover his balance and continue surfing the wave,” Dr. Thomas Campbell, a medical officer at Princess Alexandra Hospital in Queensland, wrote in the report, which was published on March 26 in the journal BMJ Case Reports.

The maneuver resulted in the pterygium being ripped from the surface of his eye, Campbell continued. While this isn’t the most traditional method by which to eliminate the condition, it worked.

Despite traveling at 30 to 40 mph, Dr. Mark Fromer told Live Science removing a pterygium is rarely that simple, and can even be extremely challenging for doctors to remove with scalpels and scissors. Fromer, an ophthalmologist at Lenox Hill Hospital in New York City as well as eye surgeon director for the New York Rangers hockey team, said it’s more likely the surfer tore the conjunctiva, which is the membrane lining the surface of the eye.

“I think it’s possible he got some sort of blast to the eye that might have torn his conjunctiva. And the blood supply to the pterygium was interrupted, so maybe it died,” Fromer said. “But it would take a heck of shot of water to do that. Pretty unlikely this is going to happen to anyone else.”

After the incident, the surfer’s eye was inflamed for a few days, but his vision began to improve shortly after and the condition has disappeared.

Image from Travisthurston on Wikimedia Commons