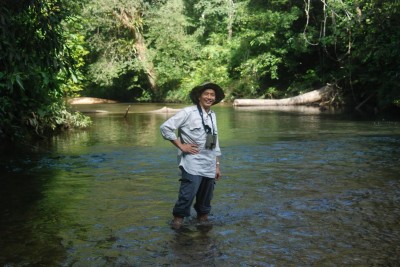 Melvin Gumal, Director of the WCS-Malaysia Programme since 2003, has been named one of eight finalists for this year’s Whitley Awards. This prestigious international prize honors exceptional individuals working in grassroots nature conservation in the world’s developing countries, and who often face humanitarian, environmental and political challenges in the projects they undertake. The prize, awarded by The Whitley Fund for Nature (@WhitleyAwards) is called the Green Oscars.

Gumal was selected from a field of more than 170 applicants from around the world.

HRH The Princess Royal will announce the final results at a special evening ceremony on Thursday, May 8, at the Royal Geographical Society in London.

Prior to working with WCS, Melvin headed the Conservation Education and Interpretation Unit of the Forest Department Sarawak’s National Parks and Wildlife Office for 15 years and helped co-author the Wildlife Master Plan for Sarawak. As part of this unit, he worked closely with rural communities living in and around protected areas with the aim of increasing their involvement in and support of conservation of the protected areas and wildlife.

In addition to Gumal, the other finalists are:

Media are invited to attend a press briefing on Thursday 8 May to learn more about the Whitley Awards and interview the finalists who will be in London for the annual Awards Ceremony.