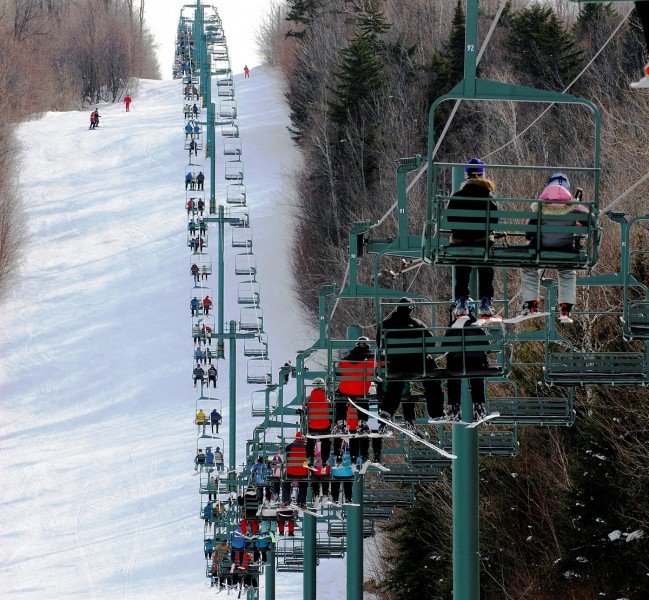 The state of New York is planning to roll out ski bus service next winter to 19 ski areas, including Titus Mountain, from New York City and Toronto. Image courtesy Titus Mountain.

Forget the romance of the ski trains, New York is going for bus service.

The state plans to launch bus service from the Big Apple to 13 upstate ski areas next winter, while also providing bus transportation from Toronto to six others closer to the Canadian city.

The service is going to called “I Ski NY Bus.”

“I think this is a great opportunity for all the ski resorts involved and we are looking forward to working with the state on this initiative to bring more people to upstate New York,” said Joe McCracken, marketing manager at Belleayre Mountain in Highmont.

Though costs have yet to be revealed, New York Governor Andrew Cuomo said he wants New Yorkers to know they should stay in New York and all out-of-state visitors to feel welcome to partake in all that upstate has to offer.

The idea is to get New York ski areas to be more competitive by making it easier and more affordable for New Yorkers and visitors to travel.

Presently, only two New York ski areas—Hunter and Windham—have consistent bus service out of New York City. Both of those mountains have established relationships with New York City tour operators to bring busloads of skiers and snowboarders upstate on weekday and weekend trips.

Under this new plan, the state will provide bus service. Plus, when established New York City tour operators are not going to Hunter or Windham, the I Ski NY Bus will do it. The plan also includes a secondary market from Toronto to provide Western New York ski areas to same opportunity.

The trips from New York City are:

From Toronto, buses go to:

“Getting to and from a ski resort can be a daunting task, especially if you have a long drive to contend with,” emailed Titus Mountain marketing director Dene Savage. “Getting organized. Loading equipment, unloading equipment. Parking and hauling stuff to and from the lodge. Driving when you’re tired after a long day on the slopes. Throw in slippery roads, cost of gas, wear and tear on your vehicle, etc.”

Taking the bus eliminates the hassles and encourages more folks to go skiing and/or boarding, he said.

In Malone, about half of the mountain’s clients are Canadian, generally about one to two hours drive away in the Ottawa and Montreal areas.

Toronto is further, about six hours away, and a bus could be the ticket.

“Toronto is a huge market with lots of skiers and snowboarders,” he said. “Titus Mountain is well-liked there but the six-hour drive is a big hurdle. This is where the I Ski NY Bus can really help attract more visitors to our resort.”

New York’s tourism industry is one of the top employers and economic generators in the state. According to recent estimates, 8.8 million more visitors traveled to New York State in 2013 than in 2012, representing an increase of 4.2 percent. Also, the industry is projected to have generated $7.7 billion in state and local taxes with direct spending expected to have reached $61.3 billion, up seven percent from 2012 and double the national average.

Additionally, ski bus transportation is a green thing on a couple of levels.

“Skiers and snowboarders tend to support things that are environmentally-friendly and everybody likes to save money,” said Savage. “The proposed bus service would be beneficial in both ways.”