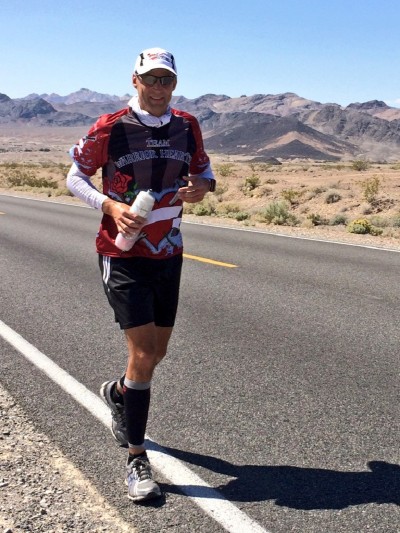 Six years ago, Brian Keltner was an overweight couch potato, and happy about it. Now, the founder and CEO of Warrior Hearted can’t imagine not being active. What sparked the change might surprise you.

Keltner, a member of California law enforcement for years, found true inspiration in his own son, who was born with special needs. After watching his son struggle daily, Keltner realized that if his son could face such challenges, so could he. Since then, he has set about conquering one athletic feat at a time, with the goal of using his own accomplishments as a platform for raising awareness about children with special needs.

“I started off just walking for 20 minutes, three times a week,” Keltner told ActionHub. “It kind of snowballed from there. The next thing I know I was running a 50k Ultramarathon through the mountains thinking ‘this is completely awesome.’”

On March 22, Keltner ran the 120-mile stretch from Baker, California to Las Vegas, Nevada in under 30 hours. To complete such a run is a tremendous feat in itself, but to Keltner and team Warrior Hearted, this event will be the foundation’s first major media push.

“I’m calling it the Run Warriors Race,” Keltner said. “It will be the first major fundraiser for us. Through social media we are trying to encourage others to join in. They can pick an event that they want to do, whether it be a marathon, or a bike ride, or whatever interests them, and use it to raise money for the foundation.”

Keltner’s desire to raise funds and awareness for special needs children obviously grew from personal experience. “I had encountered lots of problems with my son and the schools,” Keltner said. “We also struggled a lot with insurance companies. After meeting with some other parents, I realized that these problems were widespread.”

One common problem parents encounter is the fight with distributors and insurance companies to acquire wheelchairs and other special equipment. For example, Keltner recounted a story of a family who had ordered a chair for their son. They spent years fighting for the right equipment, and the money to cover it, but when they finally received the chair, two years later, the child had outgrown it. The parents were forced to go back to the companies and resume the fight.

Today, about 14 percent of children are born with special needs, with more added daily through substance abuse or accidents. The needs of these children are extensive, causing about 25 percent of parents to quit their jobs in order to care for their child. “I don’t think people realize how high the need is, but 14 percent is a really large amount,” Keltner said.

“The Warrior Hearted Children’s Foundation has two main goals,” he continued. “The first is to fill the gap between the services offered and what the child needs. The second is to work with the parents to become better advocates for their child, because no one is going to care more about the child well-being.”

Keltner says that he actually first got the idea for the foundation while competing in the North California Ironman, aptly named Vine-man because it takes place in wine country. Throughout the long course, Keltner found himself reflecting on his son’s current lifestyle. He decided that, just like those who push themselves to extreme athletic feats, these special needs children were truly warriors, and he needed to showcase that. “Though they may not be able to participate in some things, they battle every day, their battles are just on a different scale. Their parents fight right along with them, trying to help them learn to be self-sufficient.”

After his run this March, Keltner plans to begin hosing regular events, such as five-kilometer races, a golf event and even a motorcycle run, to continue spreading awareness and raising money for these “warrior” children and their families. “For a long time this subject [of special needs] was taboo,” Keltner said. “Now, there is more understanding thanks to autism and down-syndrome awareness groups. But there are hundreds of birth defects that affect our children every day. Though the vocabulary is changing, I want to continue that. These are great kids who just need a little help. I want to promote them, and get their stories out there.”