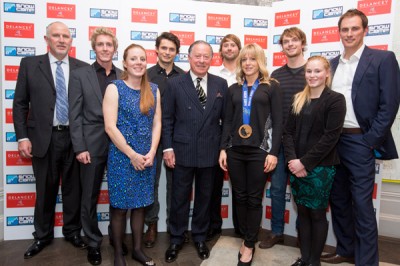 Sochi 2014 stars Jenny Jones and Billy Morgan led the celebrations at a party marking the achievements of Great Britain’s skiers and snowboarders at the recent Winter Olympic Games. Delancey – the specialist real estate investment advisory business and new Principal Sponsor of British Ski and Snowboard, in partnership with British Ski and Snowboard and the innovative youth snowsports charity Snow-Camp, hosted the party at the Arts Club in Dover Street, Central London last night.

Announced as new Principal Sponsor of British Ski and Snowboard prior to the Sochi Winter Olympic Games, Delancey’s funding has already provided Olympic support and will be critical to the future development of British snowsports – providing training and development funding for Alpine, Snowboard, Freestyle and Cross Country athletes. It will support those working towards the 2018 Olympic Winter Games and will also reach younger stars, giving them the opportunity to pursue their passion via the provision of facilities and training in the UK and internationally.

It’s fantastic to be reunited with my Sochi team mates to celebrate our Olympic success. For our Park and Pipe programme we believe this is just the start. There is so much ski and snowboard talent out there and financial support by sponsors such as Delancey will help us develop and build our programme and breed more success in future years.

Seeing so many people come together to celebrate our performance in Sochi is awesome. We are thankful for the support of our sponsors and everyone behind the scenes. The news that Delancey have extended their sponsorship across British Ski and Snowboard can only be a good thing for Park and Pipe and it would be amazing to have more of the things we need to succeed in the future.

Sir John Ritblat, President of BSS and Chairman of Delancey’s Advisory Board said:

This is my 36th year of supporting British snowsports, and we are extremely proud that Delancey has been able to play its own small part in supporting our nation’s dedicated athletes. British skiers have more than enough talent to continue do well internationally, however they do need to be decently financed if this is to happen, and if future success is to be fostered from the ground roots up.

The British have been a leading force in winter sports for over 100 years, and though skiing has had many Royal patrons and over 2 million recreational skiers, it is still treated as a second-class sport to football, rugby and many summer Olympic sports. Many of us recall the names of Konrad Bartelski, Graham and Martin Bell, Alain Baxter and Finlay Mickel, but few remember that they all ranked in the top 15 in the world, nor the success they achieved against the international Alpine nations against whom they competed. It is wonderful that the likes of Jenny Jones, Chemmy Alcott, Dave Ryding and Billy Morgan are finally getting the recognition they deserve.

This headline sponsorship is in addition to our title sponsorship for The Delancey British National Alpine Championships which will be held in Meribel next month, and also to our new charity partnership with Snow-Camp – an exceptional charity that we very much look forward to building a long-term relationship with.

Delancey’s support, provided through the generosity of Jamie, and Sir John, during the last four years has been invaluable. This new, exciting arrangement will enable us to continue the work that we have started and will help us to create an even stronger team of athletes who can win multiple medals in Pyeongchang in 2018 and win World Cup and World Championship medals on their way there.

The headline sponsorship is in addition to Delancey’s fourth year of title sponsorship for the Delancey British National Alpine Championships – which takes place in Meribel from the 30th March to 11th April this year.