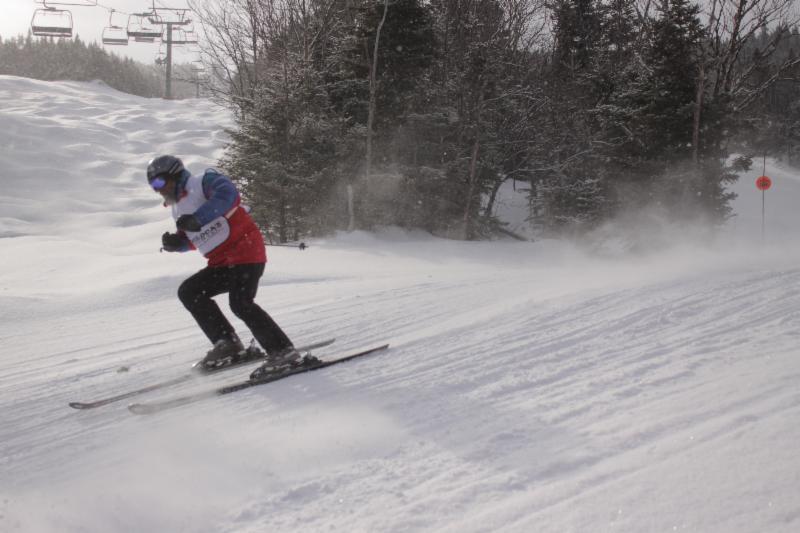 Wildcat Ski School Technical Director Mark "Homer" Holmes of Shelburne, NH skiing perfect conditions at Wildcat Mountain for the annual 100K challenge. Holmes was the catalyst for the event when he first made it a personal challenge of his to ski a 100,000 vertical feet in a single day and has participated in the fundraising event since its inception 11 years ago that developed following his personal feat.

A total of 38 skiers and riders registered and accepted the challenge to conquer over 100,000 vertical feet in a single day on Monday, March 10 to benefit Make-A-Wish Foundation of New Hampshire. Weather for the event was ideal for the field of male & female, young & old, and ski & snowboard participants to push themselves to complete the marathon alpine event. This year’s participants were able to collectively raise over $158,000 in pledge donations to set a new event record high donation amount.

Loading the Wildcat Express high-speed summit quad chairlift at 7:30am to begin the 100,000 vertical foot challenge (skiing or snowboarding a minimum 48 runs down the Upper Catapult & Middle to Lower Lynx trails), all participants were able to complete the personal challenge. More impressive, top fundraisers for this year’s 100K Day were lead for a fifth year in a row by Kevin Elwood of Boxford, MA having raised over $91,000. William Stewart of Topsfield, MA was second top fundraiser having submitted over $25,000 in collected donations. And Ryan Hill of Boxford, MA was third highest fundraiser having raised over $10,000 in generous donations.

Wildcat Mountain has previously been recognized by Make-A-Wish Foundation of New Hampshire among its “Chris Greicius – Society of Strength” donor level. Now in its 11th year, the event has now surpassed $595,000 total funds raised and directly benefiting Make-A-Wish Foundation of New Hampshire. The annual event is unique to Wildcat Mountain coupling the accessibility and speed of the Wildcat Express high-speed, summit lift and the ski area’s greater than 2,100 vertical foot drop.

Wildcat Mountain would like to thank all participants, donation supporters, volunteers, and recognize the generosity of those that helped to make the event possible providing in-kind support and top fundraising prizes including: Bern Unlimited, Boston Patagonia, Tecnica/Blizzard, Coca-Cola Bottling Company of Northern New England, Attitash Mountain Resort and Wildcat Mountain.